How To Weigh Anchor

You've successfully anchored. Now here's how to free your hook so you can head to your next port. 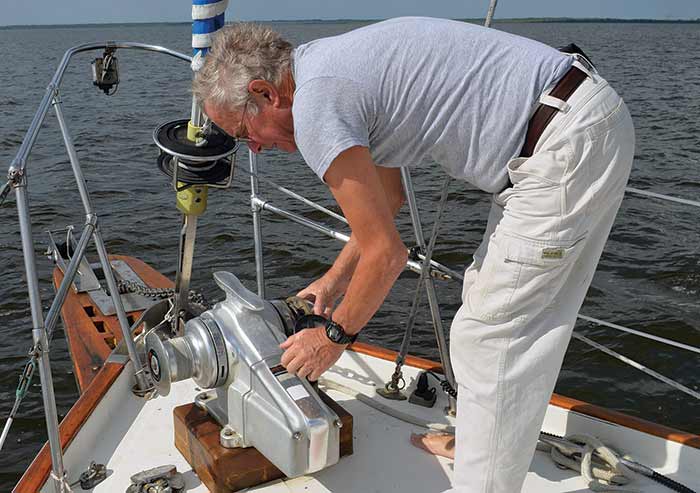 Chez Nous slowly moves forward as Tom Neale raises the anchor chain. When the boat is over the anchor, he stops the windlass, secures the chain, and lets the waves and a gentle forward RPM pull the anchor free of the bottom. (Photo: Mel Neale)

When it comes time to move on, you'll need to apply a vertical load to your anchor rode to break the anchor free. Move forward slowly and gently using the engine (never use only the windlass). If you don't have a windlass, gather aboard as much rode as you can by hand. Make sure to keep the rode out of the propeller and rudder. A person at the bow should communicate with the person on the helm by continually pointing at the position of the rode and anchor, so the helmsman can steer toward the anchor location. (See "How To Anchor".) Once the rode is directly below the bow of the boat, take a turn on a cleat. Then signal the helmsperson to put the engine in SLOW forward. The anchor should break free. If it doesn't, apply a little more throttle. Once the anchor is free, go back to neutral, bring the anchor and rode aboard, rinse off any mud, and coil and stow the rode. 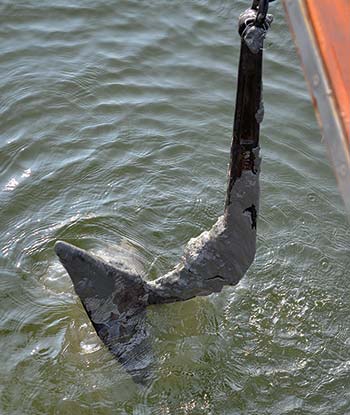 This ­anchor had been well set in a muddy clay bottom, took
some power to release its grip, and came to the surface ready
for rinsing. (Photo: Mel Neale)

Once in awhile, the anchor won't break free. First, try to use the vessel's own buoyancy and whatever wave action there is to help out. Position the boat so the rode is vertical, then snub it up as tight as you can with each successive dip of the bow in the waves, letting the pumping action of the vessel work the anchor free. If this doesn't work, let out a little scope (2:1) and slowly motor forward in an effort to back the hook out. Circling the anchor while keeping the rode tight may work as well, but always keep your prop, rudder, and keel free of the rode.

If Davy Jones just won't let go and the water's clear and the weather is nice (and it's safe to do this), grab your snorkel or diving gear and check things out. You might see that your rode is around a rock or other obstruction. Alternatively, use a "look-down" bucket (a 5-gallon bucket with a clear Plexiglas bottom).

If neither is an option, check the chart to figure out what you could be hung on. If you think a cable or old anchor chain is the culprit, utilizing an anchor rider or chaser may work. Shackle a short length of chain together to form a loop around the anchor rode, then lower it down to the anchor shank using a messenger line of double-braided nylon (3/8-inch minimum). Double-braided line has less stretch than three-strand and won't snap back if it breaks or when the anchor comes free. Once you've worked the chaser over the anchor's shank (keeping the rode somewhat tight and vertical will make this easier) and down to the main body of the anchor, use the messenger to pull the anchor backward and hopefully free from the obstruction.

In extreme cases, buoy the rode, cast it off, then try backing out the anchor with the messenger by pulling 180 degrees from where you were originally anchored. If an old anchor chain or cable is the culprit, try to fish for it with a grapnel to lift it up and free your anchor. Be sure to attach a trip line to the grapnel's crown to aid in retrieval in case it gets stuck, too!