Anchoring out is fun if you have confidence that your anchor will hold. Regular inspection of your ground tackle helps you rest easy. 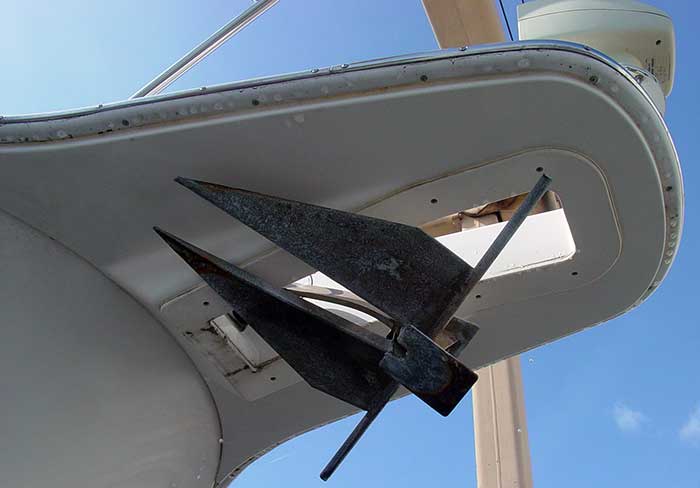 Your ground tackle is only as strong as its weakest link, literally, and inspections should cover not only the anchor and rode, but also bitts, chocks, cleats, and any gear that's part of the system used to keep your boat securely anchored.

Let's Start With The Anchor Itself

Are there bent flukes, shanks, or other such damage? If galvanized, is the coating in good shape, or are there areas of rust and corrosion? Consider the anchor's type and size. Is it physically large enough for your boat and suitable for the type of bottom likely to be encountered?

One problem I often see while surveying boats without an anchor windless is ground tackle that's selected based on what the owner can physically manage rather than what the boat actually requires. At a minimum, carry a primary (working) anchor and a secondary anchor that is a different style than the primary to give additional options when anchoring in various bottom types.

Annually, pull your rode and lay it out for a thorough examination. Your anchor rode will be either all chain or a combination rode of nylon rope and chain. If a combination rode, how is it attached to the anchor? You can bend (attach) a rope rode directly to the anchor, but it's not recommended. Adding a length of chain protects a rope rode from chafe from a rough seabed while adding weight, which increases the catenary of the rode (for improved shock absorption) and horizontal pull, both of which help the anchor to remain set. Avoid using plastic or vinyl-coated chain. It may be easier on your deck finish, but it can hide corrosion, particularly in saltwater.

As for the rope portion of the rode, the most common type used is three-stand nylon. It's strong and (compared to braided line) provides more elasticity to absorb the sudden loads of a boat surging around at anchor. It's more easily spliced and less expensive.

An all-chain rode can be attached directly to your anchor using an anchor shackle, which is more bell or "C" shaped than a standard shackle, to provide greater freedom of movement and prevent binding. If there's a chance the vessel will shear or swing in circles (particularly when laying to a single anchor), consider installing an anchor swivel to prevent twisting.

How To Splice Rope Around A Thimble

Anchor swivels should be drop forged (not screwed, riveted or welded together) and the largest size that fits the chain link without binding. Ensure the jaw fitting of the swivel is attached to the chain and that the swivel eye is attached to the anchor shank using an anchor shackle. Some boaters don't like swivels, viewing them as a potential weak link. Any moving part can fail under load if not properly designed and constructed, so if you install a swivel, buy the best quality you can find.

Inspect the rope-to-chain connection, which should be made via a rope-to-chain splice or by utilizing an eye splice and thimble (which in turn should attach to the chain portion via an anchor shackle). Eye splices are bulkier than a direct rope-to-chain splice, but are simple and reliable. They should have a minimum of six full tucks and be seized at each end while the eye is under tension (to prevent the thimble from falling out should the eye stretch when placed under load).

Verify that all shackles are properly sized and that their screw pins are secured or "moused" with stainless steel wire to prevent them from unscrewing (also a requirement for all-chain rodes).

Read "Windlass Maintenance" to learn more about how to maintain your windlass.

Open ended teardrop-shaped galvanized thimbles are commonly used in anchor eye splices, however oval or closed ear thimbles are a better choice. Teardrop thimbles can work under extreme loading but potentially allow the sharp edges of the open end to chafe the rode.

Continue your inspection while looking for problems such as wear, cut strands, aging, discoloration, or hard spots caused by heat-generated friction when a kinked line is placed under load. Chafe is a rope rode's worst enemy, so in addition to inspecting the rode itself, check hawseholes, chocks, cleats, and windlass drums for burrs, sharp edges, and protruding hardware — anything that could damage the rode.

Although synthetic rope fibers are resistant to most chemicals, avoid exposure to harsh chemicals such as acids and alkalis. All fibers will degrade over time due to UV light, so rope stored on deck should be covered or, better yet, stored belowdecks. 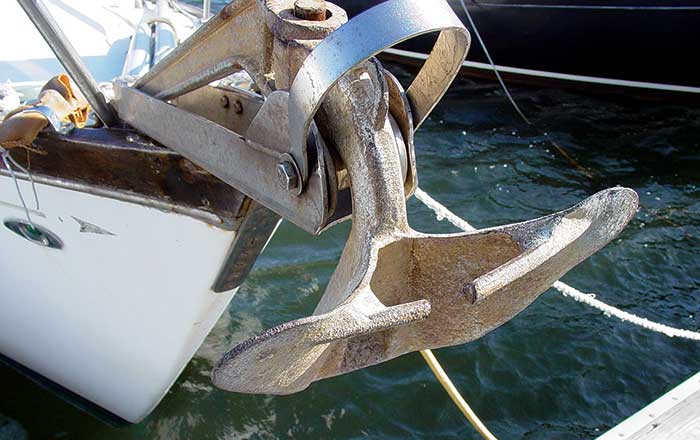 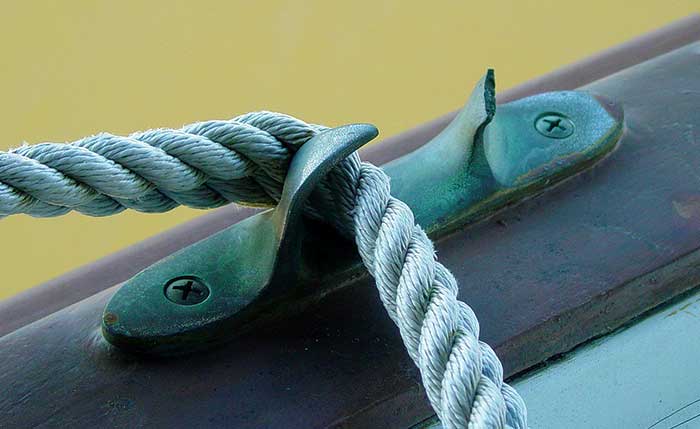 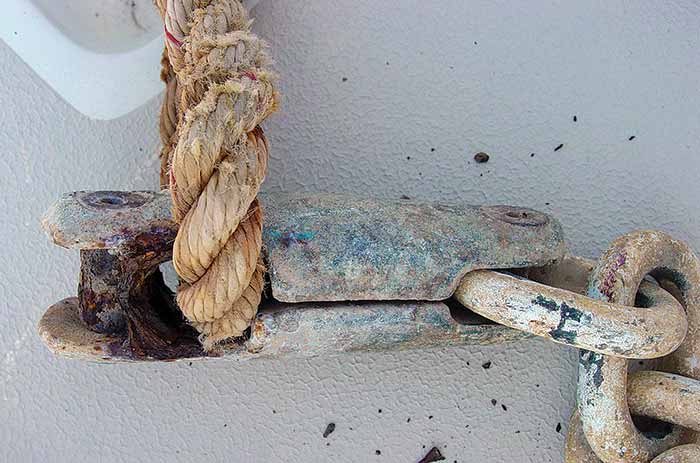 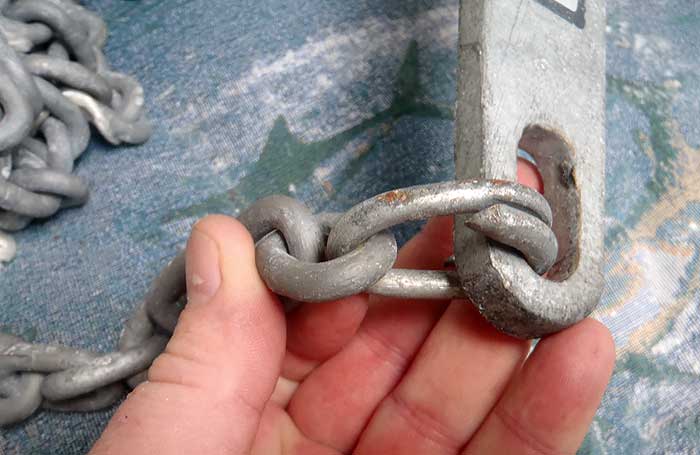 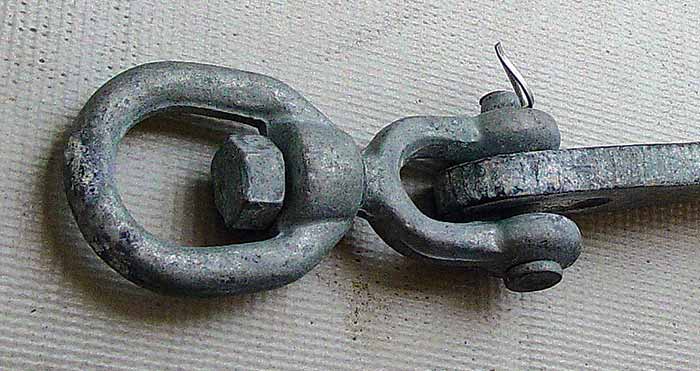 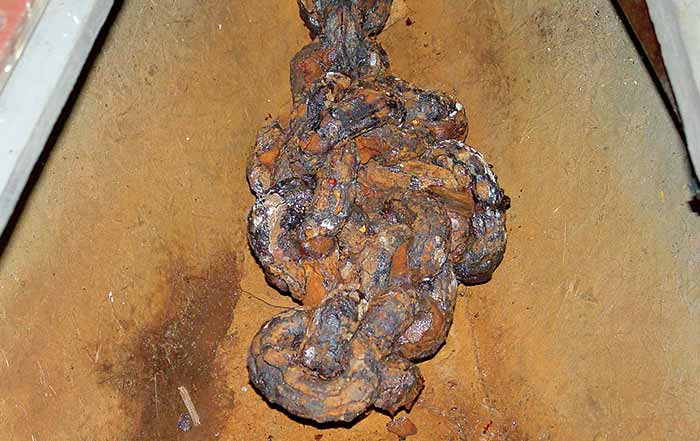 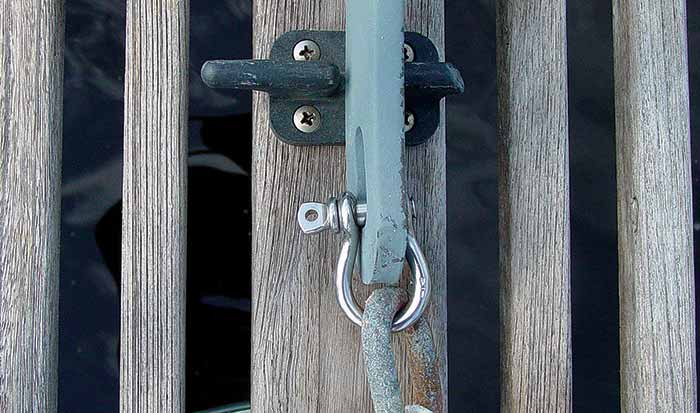 Shackle way too delicate for the job. 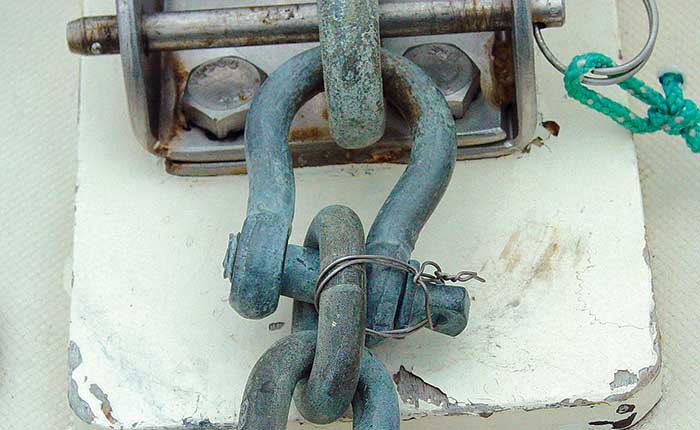 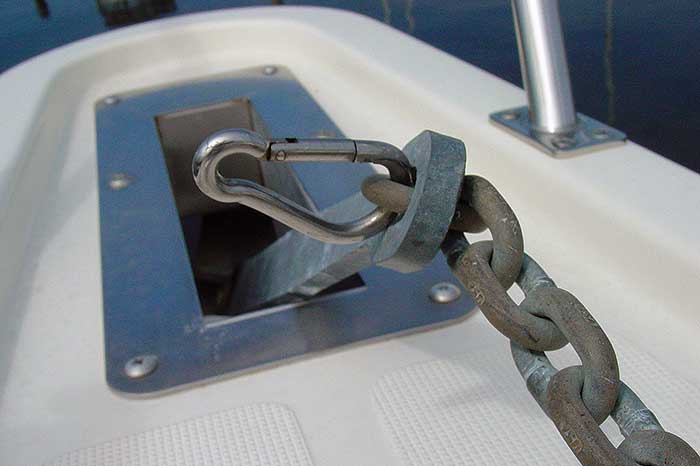 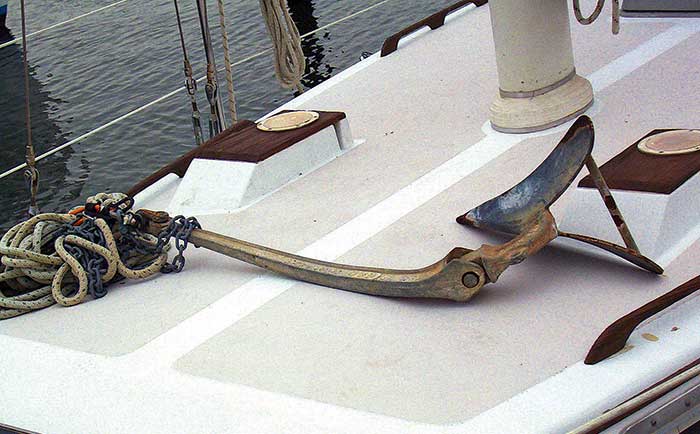 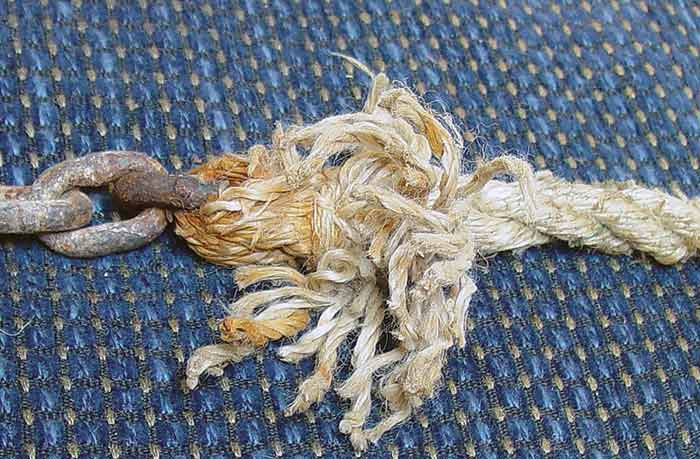 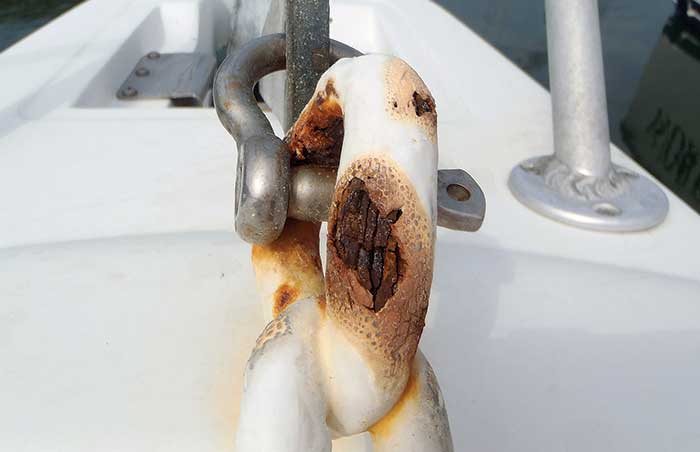 Serious corrosion of a coated chain. 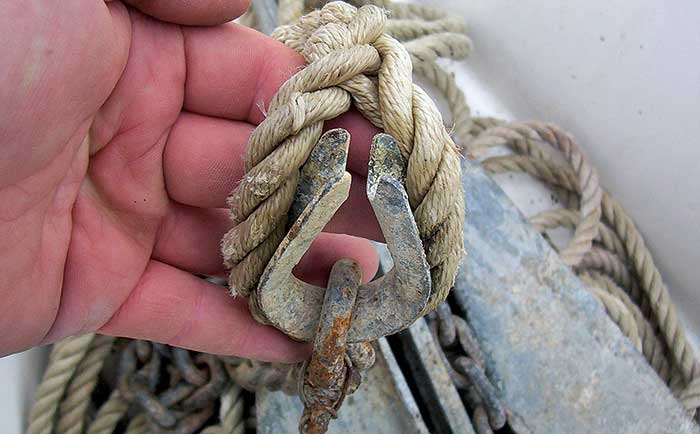 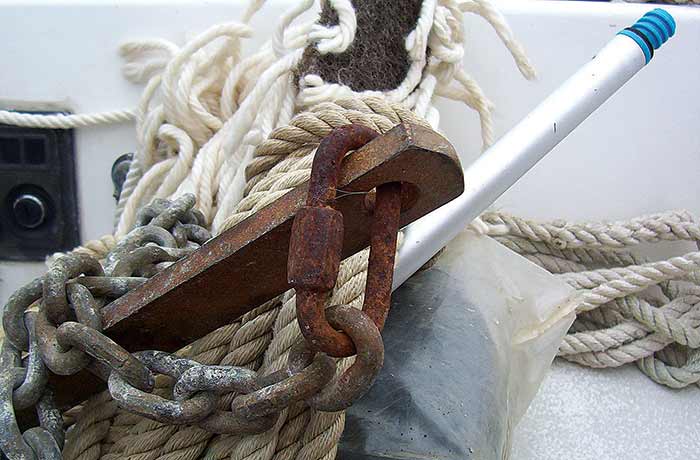 While chain may be tougher than rope, it's not maintenance-free. Start by storing your chain clean and keeping it as dry as possible (especially off-season when the boat is on the hard). This both reduces corrosion and helps keep the unhygienic smell of Davy Jones' gym locker from your vessel's interior. Giving both locker and chain an occasional freshwater washdown helps with the above, while also letting you verify that the locker drains properly.

Avoid exposing your chain to preventable chafe, such as can occur while pulling it along that concrete dock when laying it out for inspection. Dragging your chain over abrasive surfaces removes the galvanized coating and leads to rusting.

Chain should be swapped end for end annually to promote even wear of the galvanized coating. It should be regalvanized once significant rust begins to appear. However, the general consensus is this should be done only twice, after which the chain should be replaced. Chain manufacturers don't recommend regalvanizing, and while this may seem a bit self-serving, the process of removing rust and prepping the chain does weaken it to a degree, which is where the "only do it twice" admonition comes in.

If your chain rode contains a splice, the three most common are the riveted joining link, the double-jaw mid-link, and the quick-connect link. Never splice sections of chain using bolts or spikes to join links. The riveted link is a permanent splice that looks and functions like any other link in the chain if sized and installed properly. The double-jaw mid-link is roughly the same size as a normal link, but unlike the riveted link, it's removable and can be used for both temporary and permanent splices.

Quick-connect links should be viewed only as a temporary splice. They can be used in a pinch but should be replaced with a riveted link or double-jaw mid-link as soon as possible. They're also harder for your windlass to handle as they're roughly 60% larger than the links of the chain for which they're sized.

Chain shackles are another option used to join shots or lengths of chain. True chain shackles are U-shaped (allowing them to act more like a chain link), as opposed to the bell-shaped anchor shackles mentioned earlier.

Chain rode should be pulled and laid out for full inspection annually but also after exposure to severe loading. The load applied to a chain rode isn't very high under normal conditions, however, damage can occur under moderate loading as well, such as when the chain is wrapped around an object (e.g., rock or wreck) and placed under tension. If you find your chain slipping or jumping out of the windlass wildcat (chain wheel) more than it typically has in the past, it could be a sign some of the links have been damaged and the chain may need replacing.

Finally, don't forget that an all-chain rode requires the use of an elastic bridle or nylon snubber when deployed, to act as a shock absorber between anchor and vessel.

Show Your Windlass A Little Love

If you have an anchor windlass, it should be viewed as an important part of your ground-tackle system. Start your inspection by checking for corrosion or physical damage. Inspect mounting hardware for looseness, movement, corrosion, and leaks into the vessel interior. Leaks are often caused by a broken bedding seal, typically the result of a windlass being overstressed.

Inspect electrical connections for corrosion or charring as a result of arcing. Dissemble and clean corroded connections (after securing power) with a wire brush and electrical cleaner (vinegar works well in a pinch). Terminals and post connections should be clean and tight. Coating them with dielectric grease and installing insulating rubber boots will protect against corrosion and accidental shorting.

For units with the motor and gearbox located belowdecks, check the casing regularly for rust. Most are constructed of painted steel and will readily corrode in the damp environment of the anchor locker. Address such corrosion immediately to prevent it from worsening. 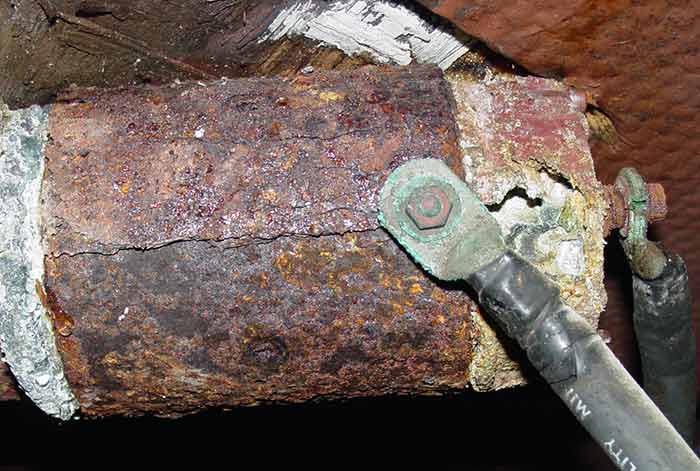 Inspect foredeck footswitches for damage and proper operation. Ensure the hinged covers are in place (to prevent accidental operation), and that the covers themselves operate easily and have a good seal when closed. Check the rubber diaphragms for cracks, tears, or deterioration; spraying them regularly with a UV shield (such as 303 Aerospace Protectant) will extend their service life.

It's also a good idea to keep the windlass covered when not in use to protect it from salt, corrosion, and UV exposure. Finally, use the windlass regularly to keep all internal gears lubricated. Grease and lube oil tend to settle at the bottom of the gearbox, resulting in a dry section of gears that could be prone to rust. If at the dock or hauled, crank the windlass over a few turns every couple of weeks.

Why is the end of your anchor rode called the bitter end? Because you'll be mighty bitter if it goes overboard! Verify that it is attached to the vessel. This attachment point isn't meant to bear the load of anchoring, but rather to prevent accidental loss of the anchor and rode.

A combination rode can be tied directly to your boat, typically at some point in the anchor locker. The bitter end of an all-chain rode can be secured with a small-diameter line or, better yet, multiple turns of tarred nylon lashing, which can easily be cut if you need to slip anchor or add more rode. For both, make sure the line is long enough to reach past the deck hawsehole for ease of access while on deck.

Check anything that comes in contact with the anchor rode such as cleats, bits, chocks, and fairleads for broken or damaged parts, looseness, or any other issues that could damage rodes or fail under anchoring loads. Access and inspect mounting hardware for leaks (which can lead to deck deterioration and loss of strength), corrosion, improperly sized or missing backing plates/washers, and damaged or missing components.

seamanship anchors and anchoring how to diy maintenance

Frank Lanier is a marine surveyor with over 30 years of experience in the marine and diving industry. He holds a 100GT master's license, and has captained and maintained many different types of vessels.