Modern boat technology takes the pressure out of docking and boat handling, and makes it a breeze. 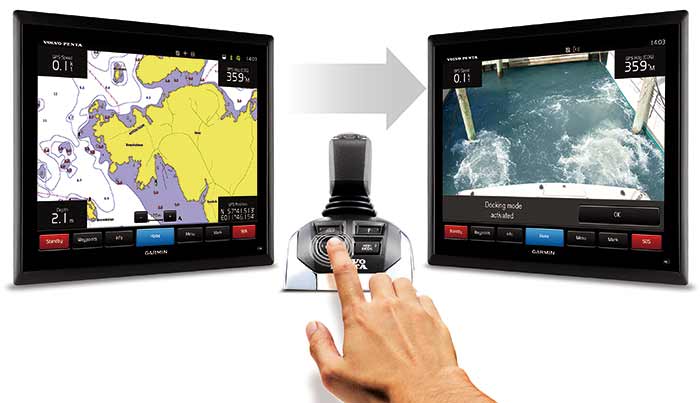 Volvo Penta's joystick system allows users to dock and maneuver boats simply with the touch of a finger.

It's been a wonderful day on the boat, but now there's sweat on your brow. There are people watching from both in the cockpit and ashore. It's time to dock. In survey after survey among powerboaters, fishermen, and sailors, everyone agrees: Docking is one of the most stressful parts of a day of boating. Since time immemorial, boaters have taken their docking prowess as a point of pride, or a matter of shame.

It's no wonder. Few aspects of operating a boat are as difficult as close-quarters maneuvering around fixed objects, especially when wind or current is thrown into the mix. Docking is a test of any boater's abilities, and sometimes even the most experienced and competent make a tiny error or misjudgment that results in a docking disaster. No one is assured of success and thus no one can relax when putting Mom's Mink into the slip.

Slowly but surely, technology is solving our docking dilemmas. The integration of joystick controls, which first became popular on a large scale with Volvo Penta's IPS system, then Cummins MerCruiser's Zeus system, and then expanded to include inboard, sterndrive, and outboard power systems of many different types, was mankind's greatest leap forward to date in resolving this issue. Give the joystick a push forward, and the boat moves forward. Give it a nudge to port, and the boat walks to port. Give it a twist, and the boat spins on its own axis. Joystick control changes the game.

Along with joystick technology came added handling controls that had never before been possible. Thanks to GPS integration, skippers could press a button and command the boat to hover in place regardless of wind and current. They could press another and jog the boat a few feet this way or that. Even steering by joystick at cruising speeds became possible.

More recently, significant advancements have been made among several outboard joystick systems. Almost simultaneously, Yamaha's Helm Master, SeaStar's Optimus 360 and Mercury's Joystick Piloting systems announced control modes allowing you to hold the boat in a static position, hold position without determining heading, or hold heading orientation without determining position. These abilities are most useful for anglers, who may want to drop their lines over a specific spot on a wreck or reef then keep the bow upwind as they fish; allow the bow to swing downwind as they hover in one spot, or keep the bow into the seas as they drift across productive bottom or fly fishing kites from the cockpit. Positional micro-adjustments are also as simple as the press of a button or a tap on the joystick.

Our on-the-water experience fishing on boats equipped with these systems has proved them to be incredibly valuable. During a day of wreck fishing on a Grady-White Canyon 456 with Helm Master we found the handling abilities vastly superior to traditional bottom-fishing methods of anchoring or drifting — but those not interested in fishing can also benefit. When it comes time to wait for a bridge opening or for another boat to complete its crossing in a tight channel, pressing a button replaces constant throttle-jockeying and maneuvering.

Even with joystick control, docking can be a challenge, especially on boats with restricted visibility. You may not be able to see the swim platform from the helm, on some boats a bow pulpit is hard to keep in view, or passengers can get in the way of your line of sight. In these cases, you might find yourself wishing for a joystick you could hold in the palm of your hand. And with a little advance planning, you can have it.

New systems from the likes of Dockmate (the Dockmate Twist) and Yacht Controller (the Fusion Wireless Joystick Remote) provide wireless handheld remotes about the size of a cellphone, which incorporate a small joystick. Both can also integrate bow or stern thruster control on top of engine controls, and can interface with virtually any electronic engine-control system.

We had the opportunity to test a Dockmate Twist prior to its introduction to the market last fall and used it to pull a twin-engine diesel inboard boat with a bow thruster into and out of its slip several times. Bottom line: Maneuvering the boat was a piece of cake. In fact, we watched as a sailboater who had never docked a twin inboard diesel in her life took the joystick in hand and put the boat into its slip without so much as rubbing a piling. A stress reliever? You bet.

As easy as joysticks can make close-quarters boat maneuvering, manufacturers are in an arms race to constantly improve these systems. One of the most interesting developments comes via Evinrude's iDock system, which incorporates an aircraft gyroscopic sensor. This allows the system to sense when outside influences change the way the boat responds to your commands. If a big gust of wind grabs the bow and shoves it off course, with other systems you'd have to increase pressure on the joystick to counter the effect. But the iDock senses the change and applies power correspondingly to keep the boat on course and in position automatically.

We tested this function on a pontoon boat in 20-knot gusts — a situation ripe for docking disaster — and found that while it wasn't a silver bullet due to a microsecond of time delay, it did in fact erase the majority of the wind's influence and made docking far easier in the extremely difficult conditions.

What could be even better than joystick handling? How about hands-off automatic docking? Volvo Penta has already demonstrated an early version of a self-docking prototype system that it claims is targeted for a 2020 launch. The system requires a number of sensors added to both the boat and to the dock it's heading for, but it's already been successfully demonstrated on a 68-footer for both entering and exiting a tight slip. 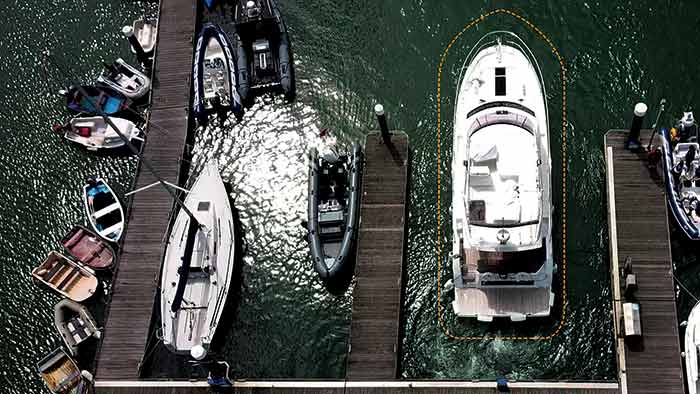 No, you can't enjoy the benefits of this system just yet, but it's close to being reality. And that will change the reality we see reflected time and time again in surveys and talk on the docks. Because when it comes to docking stress, time immemorial is drawing to a close.