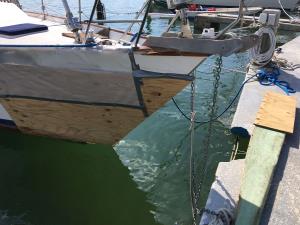 SPRINGFIELD, Va., July 2, 2019 -- Florida Governor Ron DeSantis’ recent signing of a recreational boat title bill, the Uniform Certificate of Title Act (HB 475/S 676), offers recreational boat owners valuable consumer protections and may spur other states to follow suit, says Boat Owners Association of The United States (BoatUS). The legislation protects consumers from unwittingly purchasing a stolen or storm-tossed boat that has suffered significant hurricane damage by creating a uniform boat titling system that is recognized nationwide as well by the U.S. Coast Guard. Boats that are repaired and later put up for sale will now have titles clearly labeled as such.

“While all states have motor vehicle title laws, these do not apply to recreational boats,” explains BoatUS Manager of Government Affairs David Kennedy. “This legislation institutionalizes several consumer protection mechanisms that are already commonplace for motor vehicles. These include clear labeling of significant structural damage on vessel titles, creating a uniform system to identify legitimate vessel owners/lien-holders, and better ways to prevent the sale of stolen boats.”

Added Kennedy, “By ‘branding’ the titles of vessels that suffer significant damage, buyers will be made aware of material information that could affect a vessel’s condition. It’s not designed to stop a sale. It’s to give buyers the true condition of the vessel they are interested in purchasing and helps them make smart purchases.”

While the legislation offers benefits to boaters residing in Florida due to the high number of boats there, it also has repercussions beyond the state’s borders. Florida is ranked No. 1 in the nation for recreational boat registrations with 918,255 registered vessels, according to the most recent U.S. Coast Guard data available. “With a boat registered in Florida that’s later moved to another titled state and sold, the new owner will also benefit from knowing the boat’s history,” added Kennedy. “And it will be much harder to unload boats that are stolen in Florida and later fraudulently sold out of state.”

BoatUS advocated for the new law, which is based on model legislation developed by the Uniform Law Commission. Currently, 10 states still do not issue vessel titles, making it easier for thieves to sell a stolen boat using a fraudulent bill of sale or forged registration document. BoatUS supports uniform boat titling in all states.

New Florida boat title law: what it means for you https://bit.ly/2JaV6wU @BoatUS, #BoatUSonWatch