BoatUS urges recreational boaters to be on watch for engine-killing E-15; send message to Congress and President to fix Renewable Fuel Standard 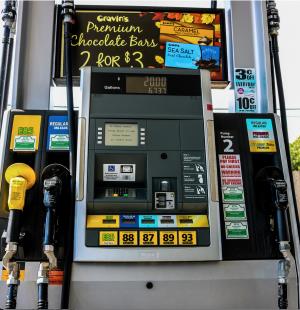 E15 gasoline is illegal for use in boats, many other vehicles, and power equipment. Can you find the E15 warning label? Credit: National Marine Manufacturers Association
Download hi-res photo

The fuel had been banned at the pumps from June 1 to September 15 over concerns that it contributed to smog on hot days. As a result of EPA’s action, Boat Owners Association of The United States (BoatUS) is advising boaters that they will need to be very cautious at the gas station to ensure they aren’t filling their boats with fuel that’s bad (and illegal) for boat engines.
“This summer, recreational boat owners will need to be vigilant when refueling their trailer boats at the gas station to ensure they don’t accidentally fill up with E15,” said BoatUS Government Affairs Manager David Kennedy. “E15 is often one of the lower-priced fuel options, and that may be appealing even with its lower energy content. The challenge when filling up the boat is that the only misfueling warning you may see is a small orange label among the clutter of signage, prices and advertising adorning the pump. It’s very easy to miss.”
Boaters have no love for ethanol in their gas. E15 is prohibited by federal law for use in recreational boat engines, and its use – accidental or not – voids many marine engine warranties. E15 has been proven to damage boat engines and fuel systems. A 2018 BoatUS Summer Fuel Survey reported that if they had their choice of fuel, more than four out of five boat owners (83%) would choose E0 (ethanol-free) fuel – if it was available. The same survey reported about half (49 percent) of respondents were unaware that the use of E15 fuel in marine engines was prohibited under federal law and will void the warranty.
The push to sell E15 year-round is a result of the Renewable Fuel Standard’s (RFS) mandate to blend biofuels such as corn-ethanol into the nation’s gasoline supply. BoatUS is asking recreational boaters for help on the issue by contacting their member of Congress to urge him or her to fix the RFS. The more than half-million-member boat owners group supports fuel choice, including smart biofuels development such as isobutanol, and the availability of ethanol-free (EO) fuels that are increasingly more difficult to find. “The fuel that most boaters want for safe engine operation, E0, is being pushed out of the market,” added Kennedy.
BoatUS is a member of the Smarter Fuel Future coalition that aims to reform the RFS.
###
Suggested Tweet and Facebook post:
Boat owners need to be aware of engine-damaging E15 gasoline at the pumps this summer. Tell your member of Congress to fix the Renewable Fuel Standard https://bit.ly/31zx6Mg @BoatUS, #BoatUSonWatch, #RFSbroken
About Boat Owners Association of The United States (BoatUS):
Celebrating more than 50 years, BoatUS is the nation’s largest organization of recreational boaters with more than a half-million members. We are the boat owners’ voice on Capitol Hill and fight for their rights. We are The Boat Owners Auto Club and help ensure a roadside trailer breakdown doesn’t end a boating or fishing trip before it begins. When boats break down on the water, TowBoatUS brings them safely back to the launch ramp or dock, 24/7. The BoatUS Marine Insurance Program offers policies that give boat owners affordable, specialized coverage and superior service they need. We help keep boaters safe and our waters clean with assistance from the nonprofit BoatUS Foundation for Boating Safety and Clean Water. Visit BoatUS.com.
Back to News Room