We tested five MOB wearables — wireless safety devices that detect and alert when someone falls overboard — and came away with useful observations on their value. 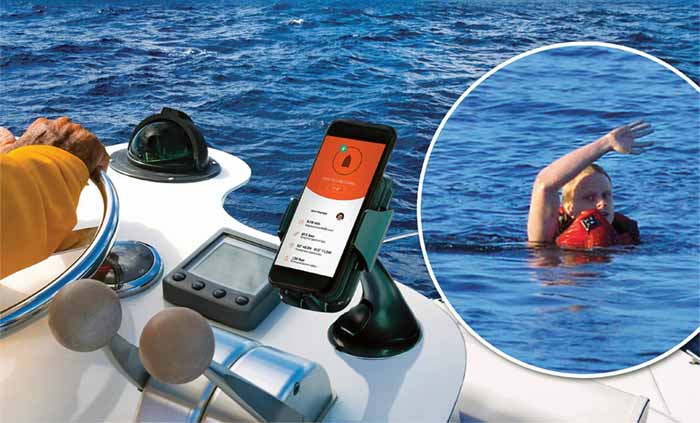 It's well-worn advice that bad things can happen fast during a good day on the water. Should someone (pets included) fall overboard, every second counts in pulling them back on board. Wireless MOB devices deliver instant alerts while pinpointing the person in the water's location. (Photo: CrewWatcher).

U.S. Coast Guard recreational boating statistics show 274 people fell overboard in 2018 — and those are just the ones reported. Pleasure boaters, like most people in life, are prone to believe the delusion of "It won't happen to me." But it isn't very difficult — or expensive — to help ensure you or your crewmembers don't become one of those statistics.

Personal flotation devices remain the most essential tool to surviving man-overboard (MOB) or crew overboard (COB) situations. But over the past decade, wireless, wearable electronic devices that sound an alarm in MOB situations have proliferated the marine safety market. While each device is designed for the same objective (saving lives), there are differences to consider when purchasing an MOB device for your particular type of boating. For example, most don't shut off the engine, but some do. Most are smart device app-based, while one unit we tested is hard-wired to a central hub mounted on the dash.

The BoatUS Foundation recently tested five devices aboard two boats in a real-world situation to gauge their effectiveness and demonstrate the differences in their operation. Each of the units performed pretty much as advertised, so the purpose of this report is to provide first-hand observations of their similarities and differences, rather than rankings.

The test was conducted on a sunny October day out of Severna Park Yacht Basin on the Severn River, north of Annapolis, Maryland. There was no notable current running on our test ground. I joined the Foundation crew: Ted Sensenbrenner, development director (who organized the test); Jennifer Dadamo, multimedia and web project administrator (who videotaped testing with a drone and retrieved the MOB in a dinghy); and Dana Senholzi, marketing coordinator (and designated "dunkee").

The testing methodology was as real-world as we could create: Dana (in full-body wet suit and wearing a life jacket) would attach an MOB unit to her wrist or life jacket, then leap over the side of a slow-moving boat. We noted time and distance (with an open reel tape measure) before the alarm sounded, then Ted at the helm would throttle back and decipher from the phone app the most direct route to turn and retrieve Dana. The fifth unit, the one hard-wired to a central hub, is not app-based and doesn't incorporate a smart device (see Fell Marine MOB+ below).

There are at least a dozen wireless MOB devices on the market, some designed more for offshore use. We settled on five reasonably priced units for inland and coastal usage, whether that's cruising, angling, or water sports. They all work similarly: a "break" in the wireless signal that links the MOB device with the receiver triggers an audio alarm that alerts the crew on board. Here's a look at the units we tested. 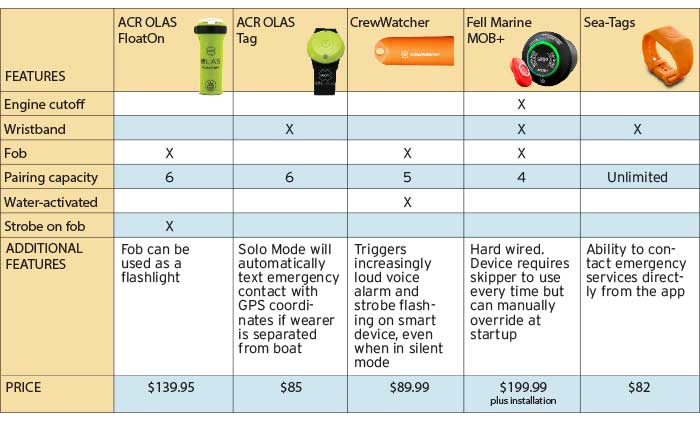 Fob device that manufacturer Weems & Plath claims is the only MOB device truly water-activated and responds "30 times faster than a personal AIS beacon at one-third the price."

How it works: If an activated beacon attached to the crewmember detects water or loses its signal, the app will automatically sound an alarm within 6 seconds and announce "man overboard" at maximum volume, even if the phone or tablet is in silent mode. The alarm intensifies until you tap the "start rescue" tab. In addition to the audio alarm, your phone or tablet will vibrate and flash its camera's strobe light. Using the Virtual MOB Compass, CrewWatcher visually guides you back to the "point of loss." The MOB icon moves relative to your boat's course. You just need to line up the MOB icon to your bow and keep the icon dead ahead. CrewWatcher is designed for nonmetal vessels up to 45 feet. 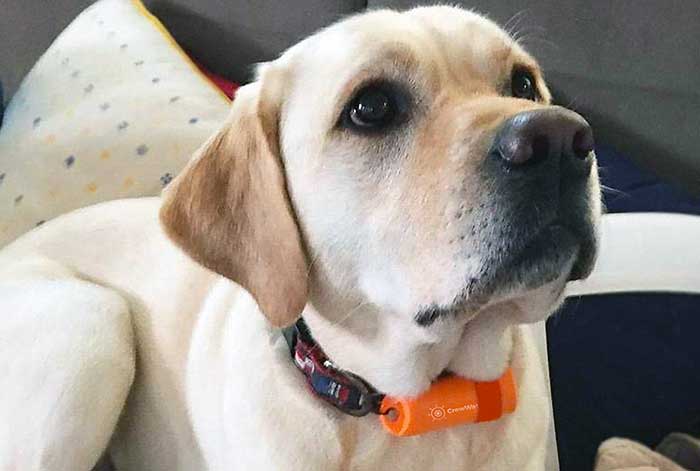 The Crew Watcher fob can be attached to a dog collar.

What we liked: You certainly can't ignore this warning, regardless of how loud your stereo is playing. After sounding the alarm, the app will automatically provide latitude and longitude coordinates of the MOB event, time of the event (and a counting elapsed time from the event), and will visually guide the rescuer using the virtual MOB compass. One smart device pairs with up to five beacons and can be attached to a pet collar.

General observations: We would prefer the fobs come with lanyards, but overall CrewWatcher was a top performer. $89.99 | weems-plath.com

Wristband design that integrates ACR's OLAS (Overboard Location Alert System) technology that works by detecting a break in the "virtual tether" from a mobile device. Recommended for boats up to 40 feet.

How it works: When activated, an alarm will sound within 8 seconds, and the app records the latitude/longitude of the incident using the smart device's GPS. The skipper is directed to the location of the MOB event with clear virtual compass and bearing data. ACR OLAS stores all location data and time of incident required by the rescue services.

What we liked: One smart device can track up to six different tags, and each OLAS transmitter can be tracked by an unlimited number of phones/tablets. The system can function with a mix of OLAS tags and OLAS FloatOn (see below) connected on the same app. Designed to easily be attached to a pet collar.

General observations: Another of our favorites for its easy set-and-forget operation. We did not test this feature, but ACR says its Solo Mode will automatically text message (SMS) your emergency contact with your GPS coordinates in the event you get separated from your boat. An ACR device we did not test is OLAS Guardian (it wasn't available), which shuts off the engine (along with sounding an alarm) when paired with an OLAS CORE base station. $85 | acrartex.com

Fob device with an LED flashlight and water-activated strobe.

How it works: The ACR OLAS technology detects a break in its "virtual tether" within 8 seconds. The smart device then sounds an alarm and records the latitude/longitude of the incident using the phone or tablet's GPS. A virtual compass directs the skipper to the GPS location where the MOB occurred. All location data and time of incident is recorded. Users can track up to six different OLAS Transmitters with one phone/tablet, and each individual OLAS Transmitter can be tracked by an unlimited number of phones/tablets.

What we liked: The app fired right up, quicker than others tested. In addition to the audible alarm on the mobile device, a strobe light automatically activates once the transmitter's integrated water sensors detect 6 seconds of water connection. The high-power strobe flashes once every second for up to 20 hours and is reportedly visible up to 3 nautical miles away — an important additional safety tool for low-light rescues. The fob also functions as a flashlight and can attach to a pet collar.

General observations: Suitable for offshore use. FloatOn seemed to bounce around more than the other fob devices, so it was a little awkward hanging from a life jacket. $139.95 | acrartex.com

The only device we tested that incorporated an "xHUB" installed on or near the helm console and wired into the on board AIS and a wearable "xFOB" that can be inserted into a wristband or clipped onto a life jacket. One fob (worn by the skipper) shuts off the engine if the xFOB is submerged in 4 inches of water or is beyond range of the xHUB, while the other fob(s) sounds an alarm. Up to four xFOBs can be connected at the same time.

What we liked: With its wireless engine cutoff, it addresses the serious danger of a runaway boat. The versatility of wearing the fob on a wrist or a life jacket was useful. Although MOB+ is not app-based, and its hub doesn't display a virtual compass to guide the skipper to the MOB, the alert was instantaneous once Dana landed in the water. She was less than 40 feet away by the time we turned around.

General observations: A great device for solo skippers because the boat stops if you fall overboard. The design forces the skipper to use the device EVERY time the boat is used unless he or she overrides it every time the boat is started using the skipper's fob. The system also can be activated manually simply by pressing the fob, which could cause some accidental engine cutoffs. There's a 6-second delay before you can restart the engine. Having to wire in the system might require this to be a pro installation. $199.99 (plus installation cost) | fellmarine.com

Wristband design for use on boats up to 50 feet (due to the limitations of Bluetooth coverage to avoid false alarms caused by distance from the home port). Not for steel or carbon boats, according to the manufacturer. 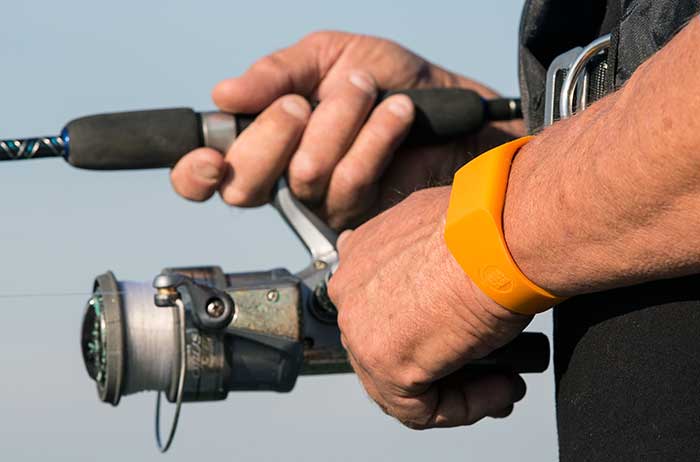 All of the devices tested were easy to use and comfortable to wear.

How it works: Your smartphone signals an alarm and records the GPS position if the wristband wearer falls overboard and the signal is broken. The app also displays the MOB's position, the real-time position of the boat, and provides updates on the heading and distance to the last-known position. If necessary, you can contact emergency services directly from the app.

What we liked: This was the simplest to set up out of the box. Sea-Tags is also the only device we tested that puts an icon of the boat on a chart setting, so it was easier to understand, and you can navigate to the MOB just by the app compass display. This was the only unit tested that pairs with an "unlimited" number of Sea-Tags, and can pair with multiple smartphones.

General observations: The wristband is on the stiff side and a little trickier to put on than the other wristband models. Sea-Tags were designed in France, built in China and, with no North American retailers, must be bought directly online. $82 | sea-tags.com