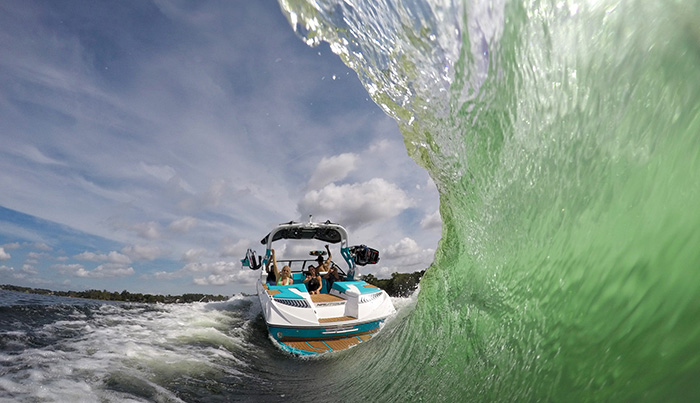 Love them or hate them, the popularity of wakeboats shows no sign of ebbing as more boaters join the wave-riding culture.

Distinguished by their neon-bright colors, rugged towers arching high over the boat, and adorned with swiveling board racks and helm stations more closely resembling those for spacecraft than a boat, wakeboats are easy to spot on the water. These social-centric boats comfortably seat around a dozen people — all waiting for their turn to ride the rolling waves these boats are designed to create.

Back in the 1920s, Ralph Samuelson designed the first water skis from two pine boards and skied on Lake Pepin in Minnesota. This was the dawn of a very different type of fun afloat, and learning to (or trying to) water ski became a rite of passage in powerboat families. For many it was an addictive adrenaline rush. Then came wakeboarding — one board instead of two skis, the rider still clutching a towline, and, wow, the jumps and flips were impressive. At some point the surfer crowd showed us that, once up to speed, you could discard the towline altogether and ride the boat's wake on a surfboard. For years wakesurfing was a novelty behind the boat, but that changed when long-board surfer Hunter Joslin screwed a fin onto a short skim board and mastered surfing boat wakes.

"The ski/wake segment has always had a strong following of loyal customers," says Bill Yeargin, president and CEO of Correct Craft, which builds the Nautique, Centurion, and Ski Supreme brands. "Into the '90s those customers were focused on skiing. Then it shifted to wakeboarding. Currently, customers want to wakesurf, and the demand for these boats does not seem to be diminishing."

While some athletes still crave speed, wakesurfing is less physically demanding, which explains why you may be seeing more of these boats on your local waters. Numbers don't lie: According to the Water Sports Industry Association (WSIA), the advocate for the towed watersports industry, sales of the ski/ wake segment of boats has grown about 10 percent annually since 2013.

"Innovation is making wakesurfing easier, and that's helping to drive its popularity," says Kevin Michael, executive director of WSIA. "Initially, to create a surfable wave, you had to lean the boat to one side by moving the crew and cumbersome moveable aftermarket ballast bags to port or starboard."

Not anymore. In the 2012 model year, Malibu introduced and patented its game-changing Surf Gate "delayed convergence" system. Actuating tabs on each corner of the transom delay the curl of the wake at surfing speeds (about 10 mph), creating a surfable clean-faced wake. With Surf Gate, there was no leaning needed, and you could change the wake from one side to the other while running. Malibu's patented Power Wedge, an actuating foil that increases wake size and modifies wake shape with the push of a button at the dash, added to the experience.

Soon after, another major manufacturer, Nautique, introduced its NSS wave-shaping system using retractable blades on either side of the transom to create waves on the corresponding side of the boat. Similar systems are found on other wakeboats.

The integration of the Nautique Surf System (NSS), which allows the driver to shift the wake from side to side without shifting ballast, and shape the wave from rollers to breakers; along with the Nautique Configurable Running Surface trim-tab-like plate that adjusts on the fly to maximize ride, make the G21 a versatile boat for beginners or experts.

Water ballast is used for extra displacement, so the best surfing waves are created from a slower-moving boat (about 10 to 12 mph), making the sport appealing to older adults whose water-skiing or wakeboarding days may be fading.

"These boats are made for families, and we're seeing teenagers actually wanting to hang out and have fun with their parents again," Michael says. Manufacturers say the adults may be buying the boats, but millennials are helping drive the purchase.

"We have a wide range of customers. They may be parents or grandparents," Yeargin says. "But the purchase influencers in the family are often younger."

More than a dozen boatbuilders now offer a wakesurf model, each with its own unique hull design and wavemaking systems. There are the venerable names that came up through the water-ski ranks, including "the Big 6" – Centurion, Malibu, MasterCraft, Nautique, Supra, and Tigé. Then there are the familiar dayboat manufacturers that have recently entered the growing market, such as Chaparral, Cobalt, Four Winns, Monterey, Chris Craft, Regal, Formula, and Sea Ray.

Prices for the typically 20- to 24-footers range from about $70,000 to $170,000 (and, yes, there are $200,000-plus wakeboats), so there's a range of wakeboats available depending on your budget. If you're shopping for a wakeboat, consider how committed you want to be to the sport. The more expensive models have more bells and whistles, and those manufacturers boast of the best waves in the industry for good reason. These top-of-the-line boats are used by professional riders in tournaments and by hard-core surfers, though not exclusively.

"When it comes to waves, it's all about shape, customization, and push of the wave, along with being able to customize it for each rider," Michael says. "Also, the zone in which you can ride is growing longer with innovations. Formerly, there was a small sweet spot to surf. Now you're seeing long, surfable waves trailing a longer distance behind the boat."

The Gen 2 Surf System creates the industry's largest wake. Its new FastFill Ballast System can ballast tanks with up to 4,300 pounds of water in less than three minutes. The new Switchback Ballast Tank quickly shifts ballast from side to side to suit rider preference. An optional Dockstar Handling System featuring two additional rudders makes maneuvering backward in tight spots and crowded marinas a breeze.

All wakeboats, with ballast drained, are designed to be smooth running and tracking runabouts built around the entire on-water lifestyle. "We design for the family boating experience," says Bryant Thomas, global marketing manager for Malibu. "For example, our new Wakesetter 25 LSV includes a built-in locker to accommodate additional soft-bag coolers and a Multi-View Wake Bench that has eight different positions for seating, and a built-in table feature."

Ballast systems can harbor aquatic invasive species. Particularly if you use a wakeboat in freshwater, practice "Clean, Drain, Dry" every time you pull your boat. See our article Invasive Species: What Lurks Beneath for tips on how to avoid the spread of AIS.

Water skiers may look for strong acceleration and minimal wake, but for wakeboarders and surfers, it's all about the wake. Wakeboats have deep-V hulls, V-drives, and ballast tanks or bladders to hold pumped-in water – typically 1,000 to 4,000 pounds – which increases displacement and makes for bigger wakes.

Features a walkthrough design, stylish new Pro Tower, and AutoWake with multisensor technology, which continuously measures onboard weight distribution and adjusts ballast accordingly to create uniform wakes regardless of rider. The wake-shaping SmartPlate and Flow 2.0 Surf System shift and shape wakes on the fly.

To shape and improve the surfability of those wakes, builders add transom hardware similar to trim tabs (to drive water down or to the side to generate waves), while others use retractable blades, wedges, or contoured plates that redirect the flow of water to create a clean and shaped wave. Most new wakeboats have integrated systems that allow wave size and shape to be changed. Some can shift the wave between port and starboard, all on the fly. A few even give the surfer the ability, through a wearable device, to make minor adjustments to the waves, including switching sides.

More Power To You

Propulsion systems for these boats are designed to keep the propeller tucked under the hull and away from the rider, whether with V-drive, jet drive, or the fairly new forward-facing drive. In 2015, Volvo Penta introduced its Forward Drive – essentially a sterndrive system, but with the distinctive feature of having the counter-rotating props facing away from the rider.

"The evolution of a tow-specific boat to the Forward Drive has given the customer a smooth and dry ride while cruising at 30 mph, with solid speed, fuel economy, and handling," says Jeff Morales, sales director of Cobalt Boats, which introduced its Surf Series in 2016. 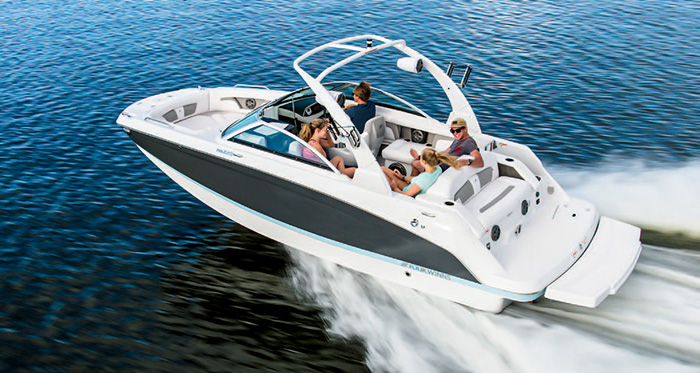 A crossover luxury runabout that creates a good, tight wake with the added Volvo Penta Forward Drive System and Four Winns Surf Package. For ballast, a single bag in the ski locker is filled with up to 720 pounds of water with a switch at the helm station. An aft bench seat by the swim platform adds to the comfort. 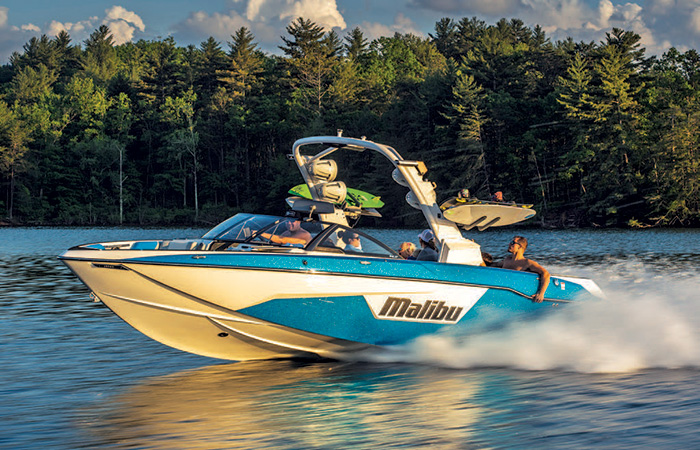 A leader in wave enhancement, including the Wedge hydrofoil, Power Wedge, Power Wedge II, Surf Gate, and Surf Band wrist remote. With seating for 18 and more than 2 tons of available ballast, the 25 LSV makes some massive wakes. The back of the Multi View Bench Seat flips forward for a front-row view of the riding, or forward for relaxing in the cockpit.

Regardless of the propulsion system, to carry that extra water ballast, horsepower on a 20-something-foot wakeboat is generally substantially higher than on a typical runabout. Start at 250 hp and go up from there. Wakesurfing boats may not be right for those who are sticklers for maximizing fuel efficiency.

"The market for late-model boats has seen an increase in demand," says Jeff Morales, sales director of Cobalt Boats, which introduced its Surf Series of boats in 2016.

"There are plenty of great used boats available as owners move up to newer models and technology," adds Bill Yeargin of Nautique. "Customers won’t be getting the latest model or technology, but they can still get great boats."

Since the big innovations in technology have emerged over only the last five or so years, aftermarket products added to older-model wakeboats are another price-point option. Distributors such as wakemakers.com sell retrofit props, ballast tanks, wake-shaping accessories, and the like.

"While the bulk of new boats are in the $140,000 range," says Kevin Michael of the Water Sports Industry Association, "someone can buy a used Nautique for about $20,000, for instance, and add on a wake-shaping accessory for about $300 and have a solid wakesurfing boat."