Invasive Species: What Lurks Beneath

Nuisance species are invading the inland waters we love. Each of us must do what we can to prevent the spread. 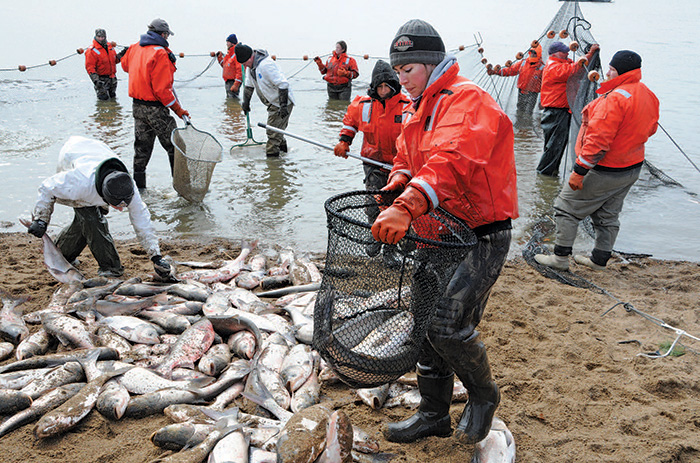 Aquatic invasive species, such as these Asian carp, cost federal and local governments billions of dollars each year to control their numbers and prevent further spread.

Thirty years ago, you'd probably never before heard the term "invasive species." You know it well now, though, and there's a good chance invasives are negatively affecting your boating lifestyle already. These invaders will not be repelled without a fight. To that end, a collection of invasive species experts held a summit last September at the American Boat and Yacht Council (ABYC) headquarters in Annapolis, Maryland. The one-day event brought together state officials, natural resources staff, and boat and equipment manufacturers. Speakers offered insight into the impact invasive species have on the nation's water systems, the spread of invasive species, and steps being taken to monitor and control aquatic invasive species (AIS), which are defined as any plant, animal, or microbe not native to the ecosystem into which it has been introduced, and may cause environmental damage or be harmful to human health.

The hundreds of AIS are varied, from microscopic eggs to plants to big fish such as Asian carp. (More than 200 AIS species have been identified in Chesapeake Bay alone!) These species damage ecosystems and negatively impact fishing by depleting natural food resources, altering the water environment, and changing the structure of the ecosystem. AIS are out-of-town bullies of sorts, in that they crowd out and overcome native species.

Trailer boaters often have to go through a demanding rigmarole to clean their boats.

Because of AIS, access has been restricted on certain bodies of water, and trailer boaters often have to go through a demanding rigmarole to clean their boats, wet lockers, bilges, and baitwells when hopping from lake to lake. Federal, state, and local agencies have enacted laws and regulations for inspections, permits, launch availability, and water access.

AIS infestation can also cause damage to boats and their components. Invasive plant life can foul propellers, jam impellers, and cause bilge-pump failure. Mussels can attach to boats and negatively affect performance, end up in engine-cooling components causing failure, and obstruct water lines causing system failure and costing the boat owner dearly. 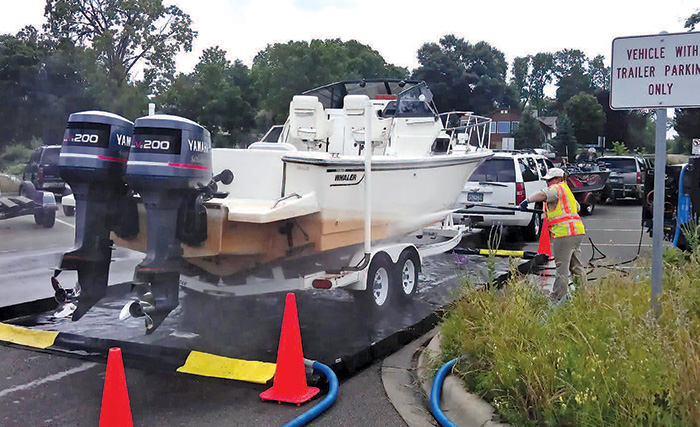 If you've ever wet a trailerable boat in freshwater in the last 15 years or so, you've probably heard the message "Clean, Drain, Dry." This ubiquitous mantra is part of voluntary guidelines for boaters, put out by the Aquatic Nuisance Species (ANS) Task Force, and written with help from our BoatUS Foundation for Safety & Clean Water.

The ANS Task Force task force, co-chaired by the National Oceanic and Atmospheric Administration (NOAA) and the U.S. Fish & Wildlife Service, is an interagency committee that brings together federal, state, and public stakeholders to develop and implement a national program "for prevention, research, monitoring, and control of infestations of nonindigenous aquatic species."

The BoatUS Foundation has championed this issue for the better part of a decade. According to the Foundation's director of outreach, Alanna Keating, "Our focus is on educating boaters — the front line for helping prevent the spread of these non-native aquatic species."

The Foundation helps to create, coordinate, and spread the message directly to recreational boaters through its free online Basic Boating Safety course, taken by more than 150,000 boaters each year. The course includes a segment on invasive species. For even more information, the Foundation also offers an online Clean Boating Course, also free, which goes into depth on the topic, including tips for avoiding the spread of aquatic invasive species and ways boaters can reduce their impact while enjoying time on the water.

The BoatUS Foundation also offers info on invasive species and prevention on its website at BoatUS.org/Invasives. New interactive 3D graphic models are being added to allow users to explore where aquatic hitchhikers might hide in a boat and trailer.

Zebra mussels were first discovered in Lake Erie in 1988, and they quickly spread to the rest of the Great Lakes and other interconnected waterways. Named for its distinctive shell markings, zebra mussels have now become common in many freshwater lakes and waterways across the U.S. The microscopic eggs are easily transported from one waterway to another, often as hitchhikers in engine-cooling systems, bilge water, and livewell tanks by unsuspecting recreational boaters.

A native of western Russia, it's believed zebra mussels were carried from the Black Sea in ships' ballast water, water that is taken into unladen or lightly loaded ships to help stabilize the vessels at sea. When these ships reach U.S. waters, the ballast is pumped out to make room for cargo and allow the vessels to navigate shallower waters. Federal laws on ballast discharge have since been changed, and vessels carrying ballast water emptied tanks 100 miles outside of U.S. waters, but the damage was already done.

Here's an example of the negative chain reaction created by AIS: Zebra mussels are filter feeding, meaning they remove particles from the water. This may sound like a good thing, but it's not. With particulates removed from the water, clarity increases, allowing sunlight to further penetrate the water column. Feces from the mussels provide a nutrient-rich environment for macrophytes — plants that grow in water. The conditions allow these plants to reproduce at a faster rate than they could previously, clogging near-shore waterways, waterfronts, and marinas. When mussel concentrations are unusually high, oxygen levels in the water drop, which is detrimental to the health of native fish.

Beyond zebras, there are hundreds of other invasive species, such as Asian carp, hydrilla plants, mitten crabs, and the Eurasian ruffe, a fish in the same family as yellow perch that looks similar to young walleye. These and many other invasive species cost federal and local governments billions of dollars each year in efforts to control their numbers and prevent further spread.

"We are now in a global economy, and globalization has led to the movement of species around the globe," explains Craig Martin from U.S. Fish and Wildlife. "It is imperative that we continue to monitor invasive species and make changes that positively affect our environment."

Pam Fuller from the U.S. Geological Survey agrees. She highlighted the department's efforts to track and collect data on invasives. "My job is to track AIS that gets moved around the country," she says. "We have data that goes back to 1790, but only in the last 30 years or so has the problems with invasive species really exploded." 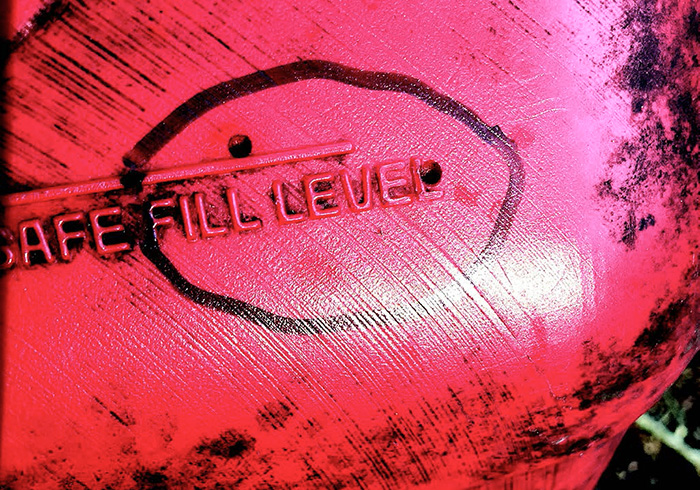 BoatUS has long advocated for the use of ethanol-free fuels for the potential damage that it does to fuel-delivery systems and engines. As if another reason was needed, consider the camphor beetle. Officially known as the camphor shoot borer (Cnestus mutilates), this tiny beetle feeds on dead trees, especially sweetgum, and is attracted to alcohol. The beetle has been found in areas from North Carolina to Florida and as far west as eastern Texas. First reported in 2004, the beetle mainly feasts on trees, but is also attracted to the ethanol found in gasoline. It will even bore small holes in plastic gas cans and rubber fuel lines, rendering them useless and, if leaking gas, potentially causing a fire or explosion, loss of boat, injury, or even death.

Although not a huge problem, yet, BoatUS is closely monitoring the situation and will publish updates should the situation change.

Standing Up To Bullies

The American Boat & Yacht Council (ABYC), the source of technical information and standards for the marine industry, established a tech committee in 2015 to look at the construction and design of boats, trailers, engines, and other components to minimize the spread of invasive species. The ultimate goal is to build a better boat that will drain more efficiently, is easier to clean and dry, and is easier to inspect and decontaminate.

After considerable research and input from nongovernmental bodies, conservation groups, state wildlife resource management departments and other interested parties the report was formally published in July 2018. Two months later, at the September summit, there were presentations looking at exploring ways of mapping and monitoring best practices for preventing the further spread of invasive species.

There is no one-size-fits-all solution when it comes to invasives.

It's important to understand there are no easy answers. Unfortunately, there is no one-size-fits-all solution when it comes to invasive species. Different approaches are required based on geographic location and the particular invasive species with which one is dealing.

What can individual boaters do to combat the problem? "Clean, drain, dry" is the universal message for the boating public. By adhering to these simple steps, boaters can help prevent the aquatic hitchhikers from traveling from lake to lake.

Some states set mandatory boat inspections before launch, and if invasives are suspected, the boat goes through a decontamination process. Although exact details vary from state to state, the principles are the same: Boats and trailers are cleaned using pressure washers with hot water — both removing and killing anything that could contaminate the water.

Although progress has been made to slow the invasions, continuous efforts need to be sustained to prevent the further spread of AIS, from state governments down to individual boaters. Yes, the task is daunting, but everyone who shares the water has a stake in the outcome.

"We must do all we can to prevent the spread of invasive species," says Elizabeth Brown from the Colorado Department of Natural Resources. "It's up to each of us."