Here's how to use your VHF radio the right way so you can be understood, and get what you need. 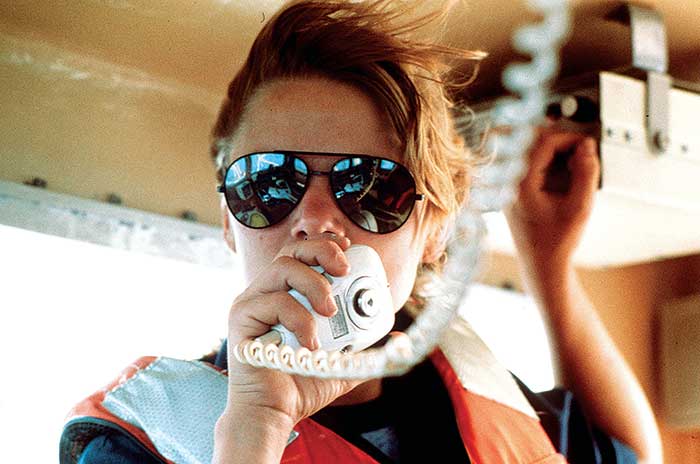 Many boaters never take the time to learn how to properly use one of the most important pieces of safety gear on board your boat: the VHF radio. If you need to call for help, don't you want that call to be heard as clearly as possible? And if you're using the VHF for communications of convenience, you certainly don't want to step on an emergency transmission, do you? So let's dive right into the do's and don'ts of VHF protocol.

Rule No. 1: Respect the channel designations, especially those of the "big three." Channel 16 is reserved for distress and safety calls and for contact calls to other vessels or shore stations. Channel 13 is used for vessel bridge-to-bridge communications and is heavily trafficked by commercial ships for intership navigation. And Channel 22A is used for safety broadcasts and U.S. Coast Guard communications; after hailing on 16, you're usually asked to switch to 22A. Because of congestion on 16, Channel 9 has been designated as an alternate contact-calling channel between pleasure vessels and to shore stations but, except in some areas, the Coast Guard doesn't transmit safety messages on 9. You should always monitor 16 in case a nearby boat needs help and to hear Coast Guard safety messages. Ideally, it's good to have two VHFs, one set on 9 and another tuned to 16.

Do regular radio checks, but the U.S. Coast Guard requests that you do so on Channel 09, which has been designated as a boater’s calling channel by FCC. Something the authorities find quite aggravating is when a recreational boater requests a "radio check" on Channel 16 (an emergency channel. Hailing "TowBoatUS" on 68 is an easy way to conduct a check.

What channels should you use for regular conversations? Channels 68, 69, 71, 72, and 78A are considered non-commercial channels, and in most areas, 68 and 72 are commonly used by the recreational-boating community. But remember that the VHF is officially for "operational" purposes. This can be as informal as passing on a weather report, but conversations about what the dog chewed up yesterday are inappropriate. Some channels, such as 70, have restricted use, and you can't use them for voice communications.

Whatever type of conversation you may be having, remember that no one else within a 20-mile range can talk on that channel while you're talking. Considering the limited number of appropriate channels, an extended conversation can inconvenience a large number of other boaters. So keep your VHF communications brief and to the point. If you're communicating with a boat that's close by (within a mile or two), you should switch over to low power. Both fixed-mount and handheld VHFs have low-power settings, which limit the range of your broadcast and thereby limit the number of other boaters you may be blocking out due to your transmission.

Remember that everyone can hear you. It's very easy to offend a large number of people on the VHF, and there are often small children listening.

3 Tips for Using a VHF Radio

In an emergency, your broadcast needs to be more structured. With the radio tuned to Channel 16 and the power set to high, begin your broadcast by stating either "Mayday" or "Pan-pan" three times over. Mayday is used when you're in a life-threatening situation. Pan-pan is the appropriate call to make when you're in a bad situation that isn't life threatening at the moment but could become life threatening. Next, state your vessel's name, latitude and longitude, a brief description of your boat, and the nature of your emergency. Speak slowly and clearly, and wait for a response from the Coast Guard. Once the Coast Guard knows the exact situation and location, be ready for some follow-up questions. You're likely to be asked about such things as the size and type of the boat you're on, the number and age of the people on board, and whether anyone has any medical training, if it's applicable to the situation.

Listen to make sure that the channel is clear before transmitting.

Even if you don't get an answer, continue making the emergency broadcast with those first three vital bits of information. The authorities (or perhaps a nearby pleasure boater) may be listening, even if you can't hear them calling back. Usually the best way to make sure your vital info gets through with no confusion or mistakes is to ensure that you have digital selective calling (DSC) active on your radio. This requires a Maritime Mobile Service Identity (MMSI) number and a link to your GPS, unless you've got a newer VHF with a built-in GPS. When you press the DSC "panic button" on the VHF, the radio will automatically transmit your vessel information and exact location. And since it's digitally processed and uses narrow receiver bandwidth, it also boosts range over normal voice communications.

If you know for a fact that you haven't activated DSC, check out the article "Setting Up A VHF Radio With Digital Selective Calling", which tells you how to integrate your VHF and GPS. Then visit the MMSI website (free for members) to get an MMSI number and register your radio.

Think of VHF communications like the highways and byways of our nation. They're public, everyone uses them, and everyone benefits from them. But they can become clogged with overuse and unpleasant due to discourtesy. Follow the proper VHF protocol, and everyone will be in for a better boating experience — and a safer one, too.