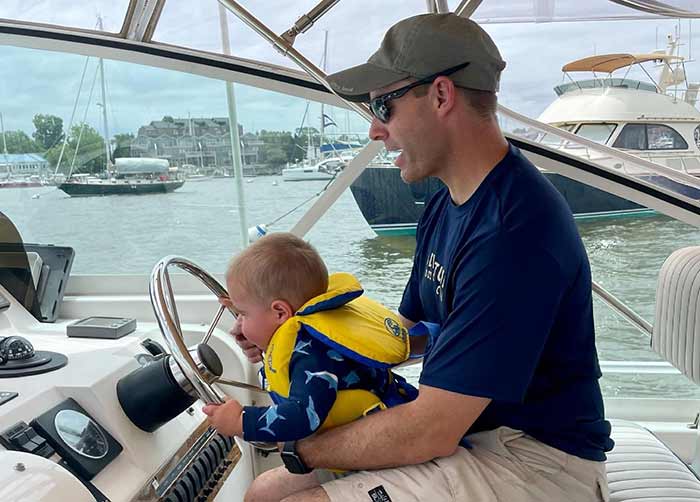 Boating must be in my blood. My grandparents were into boating when I was a child, and I loved my time aboard their Viking motoryacht and Grady-White center-console whenever they visited from Florida. After they left boating came a long hiatus from the water, but it was something I knew I always wanted to get back to after finishing medical school and residency.

I wanted a powerboat. Then I met my future wife, Sarah, whose father is a sailor. The friendly battle over whether our first boat would be power or sail went back and forth until I booked a five-day cruise in Camden, Maine, aboard Schooner Mary Day — followed by a private sunset sail on the Schooner Surprise, where I proposed to her.

Our days on the water without an engine were amazing, so I bought a 28-foot 1980 S2 Yachts 8.5 cruising sailboat. I quickly learned how much I enjoyed sailing, and working on and just being on boats. Since then, we've had two small center-console powerboats, and I restored a 1969 Kenner Skipjack 35 we named Sarah E. My wife and I loved that boat, but we knew it wouldn't suit a little one we were planning on. We sold the Kenner and bought a 2000 Mainship 34 Pilot in October 2019 — just before COVID hit.

As an emergency room physician, I was in the middle of a new pandemic we knew very little about at the onset. Working on the boat as a potential place to quarantine, I found that spending time on the water is the best way to relax and focus on what's important. 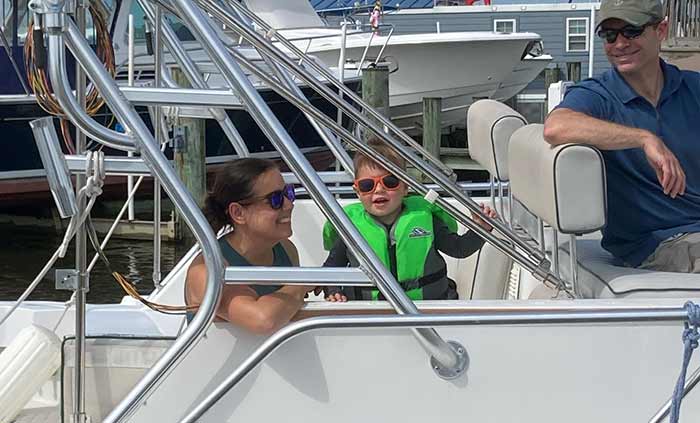 Sarah, Jack, and Matt aboard their Mainship Pilot.

Well, we made it through the pandemic with a new baby and a new-to-us boat. From shortly after he was born, our son, Jack, was on the water. To social distance, one of our favorite activities was to enjoy drinks in the slip with our dock neighbors. This also gave Jack room to play on the back of our boat.

Last winter, when the boat was on the hard, and I had to check something on it quickly. I put Jack in his car seat and told him we were going to the boat and he happily complied. I ran to the boat, took care of business while he was in the car, and drove home. The moment we were home, he started screaming he wanted to go "ON the boat." It was then I realized how much he loved being on the boat itself. The next trip, I lifted him up onto the boat still on the hard, which made him smile ear to ear.

Last year, he learned to sit on my lap and steer the boat (often in circles). This worked great in the beginning when I could correct our heading, but as he got older and more independent, he started protesting (as any 2-year-old does) every time — "I help." That's when we decided to get a wheel and a suction cup so he could steer next to me. The problem was we couldn't find a suction cup strong enough to hold the heavy wheel I bought, so I decided to make him a little box to mount the wheel on. I had plenty of spare equipment in my garage. Then one thing led to another, so I started asking around to friends and family. Buddy Rowe of Annapolis Gelcoat and Restoration was working on my boat, so I asked him if he had any contacts for a little console. He gave me one out of his garage, used for a previous job and now just taking up space. I found a steering column from American Outboard Motors. Gauges and the throttle were bought off Facebook Marketplace. I picked up a few lights from Bacon's Sails, hardware and electrical components from Fawcett Boat Supply in Annapolis. A lighted buzzer left over from my skipjack restoration made for a perfect horn. 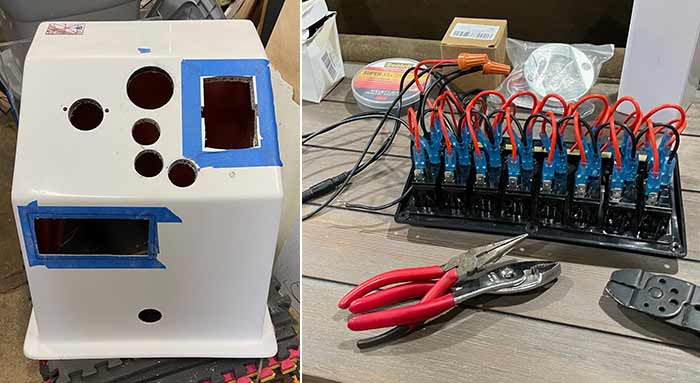 The project was a collaboration with a lot of friends and neighbors.

Once I had the parts, I tested the electrical components, did a mock up on the console, cut the needed holes, then installed and wired it all together. A switch panel wired to a 12-volt battery powers the horn/buzzer, anchor light, running lights, and gauges. 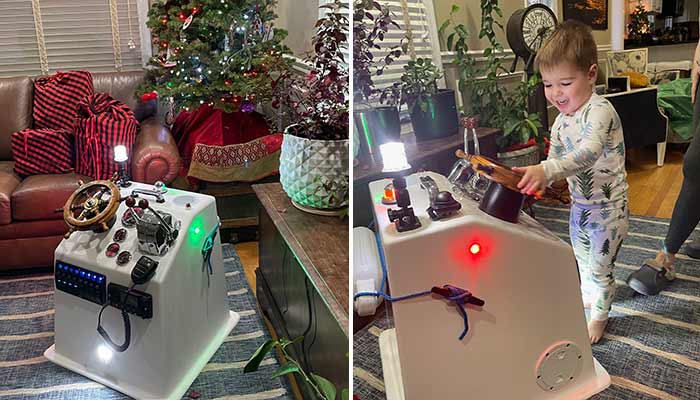 Christmas morning was one for the memory book at the Sasser household.

It took about two months to bring it all together in time for Christmas. It has been, by far, one of my favorite projects. Watching Jack's face as he plays on it makes it all worthwhile. As a bonus, his other favorite toy is a drill that Sarah picked out. Not only does he share my love of the water, but he'll hopefully pick up my love of fixing, building, and improving things.

how to diy make and create