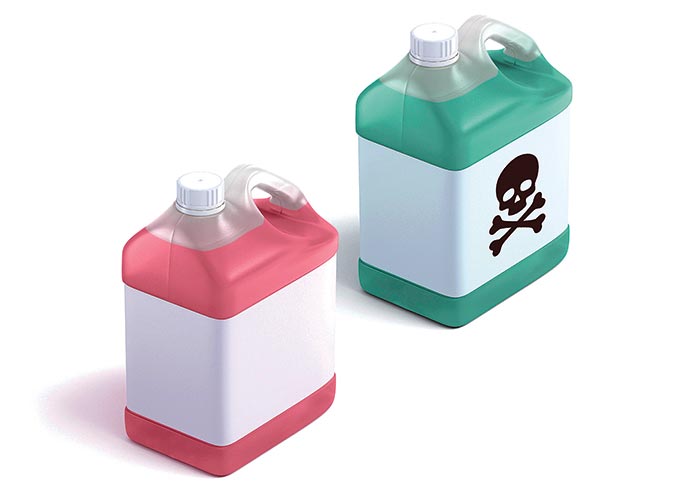 Propylene glycol (antifreeze on left), aka the pink stuff, is used for winterizing systems. “Antifreeze” is misleading as it prevents boil-over as well as freezing. Nontoxic. Ethylene glycol (coolant on right) is mixed 50/50 with water to use for engine cooling. Comes in many colors depending on manufacturer. Toxic. (Photo: Getty Images/Alexandrbognat)

Thought about your boat's engine coolant lately? If not, you've got plenty of company. Even the boat owners who do have such thoughts typically just open up the reservoir cap, see some kind of brightly colored fluid sloshing around in there, and call it good. It's a sad approach for something so crucial to the proper operation and long life of your engine. Let's take a look at how to ensure your coolant is up to the task.

This Isn't Your Great-Grandpappy's Radiator Fluid

Early automobiles used plain old water to cool the engine. It's not only cheap and plentiful but, to this day, water remains the most efficient engine cooling medium you can use. That being the case, why are we even talking about antifreeze and coolant? The problem is that while water is the most efficient way to cool an engine, it isn't the best way to cool the engine for a number of reasons.

First off, water is corrosive to internal engine components. It also freezes in cold weather and boils in hot temperatures (turning to steam), both of which can result in engine damage. The solution was to add antifreeze to the water, which not only addresses freezing, boiling, and corrosion, but also prevents the formation of limestone deposits and foaming. It additionally provides lubrication for pumps and other components of the system that require it.

What's In A Name?

Antifreeze, coolant — what's the difference? Coolant is the correct term for a mixture of water and ethylene glycol heat-transfer fluid. Ethylene glycol itself is commonly referred to as antifreeze, although this is somewhat misleading as it prevents freezing as well as boil-over. Adding to the confusion, the term antifreeze was coined decades ago by the plumbing industry to describe a propylene glycol solution used specifically for winterizing fluids used to keep pipes from freezing.

While both may be referred to as "antifreeze," there are important distinctions between ethylene glycol and propylene glycol. Propylene glycol-based antifreeze has low toxicity, which means it can be used to winterize systems such as your boat's freshwater system (think the ambiguous "pink stuff"). Ethylene glycol, on the other hand, is poisonous, meaning it must be handled with caution and can only be used in engine coolant.

Propylene glycol-based antifreeze solutions are not suitable for use as engine coolants. While that pink solution can be used to winterize an open or "raw water" cooled engine or the open side of a "freshwater" cooled engine (i.e., one that has a closed system filled with coolant), it isn't suitable for the closed portion of the engine cooling system.

For the purpose of this article, "antifreeze" refers to ethylene glycol, while "coolant" indicates a mixture of ethylene glycol and water. Along those lines, "cooling system" or similar terms refer to the closed system of a freshwater-cooled engine.

It's All About The Mix

Most boat owners realize they need a mixture of antifreeze and water in their engine's cooling system, however things tend to get a little fuzzy on the ratio. Most engine manufacturers recommend a 50/50 mixture of antifreeze and water for optimum year-round protection. Straight ethylene glycol freezes at around 8 F, boils at 330 F and is around 15% less efficient at carrying heat away than straight water.

What's All The Ruckus About Coolant Anyway?

As a marine surveyor, I inspect many boats in the 10- to 15-year range that have had only one or two coolant changes, with some even circulating the same tired, original coolant since being placed into service.

This coolant neglect has a number of consequences for your engine, from deteriorated hoses and eroded water pumps to chronic overheating and even blown head gaskets. Unfortunately, coolant maintenance is often deferred until a failure occurs.

Most owners start with a visual inspection. It's an easy check, although one that can provide varying levels of success. For example, low coolant can be an indicator of possible leaks in the system, while coolant that resembles chocolate milk contains rust or sediment, an indication of internal engine corrosion. Even if the coolant is brightly colored and appears like-new, it doesn't mean all is well. In many such cases, testing will show the corrosion-fighting additives are depleted or the 50/50 ratio is off — just a few examples of why visual inspection alone is inadequate to determine coolant condition. 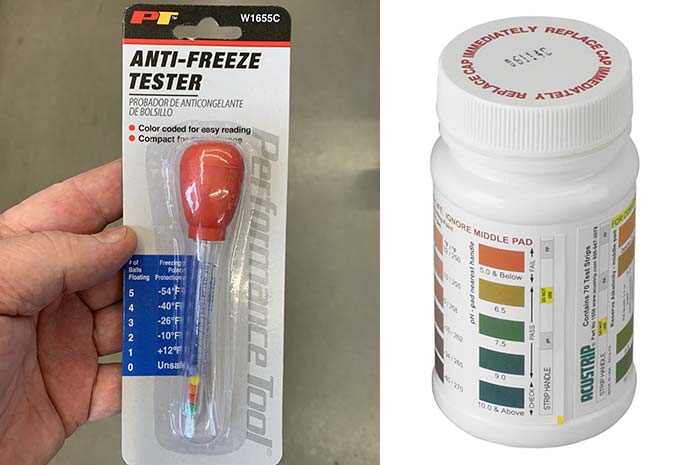 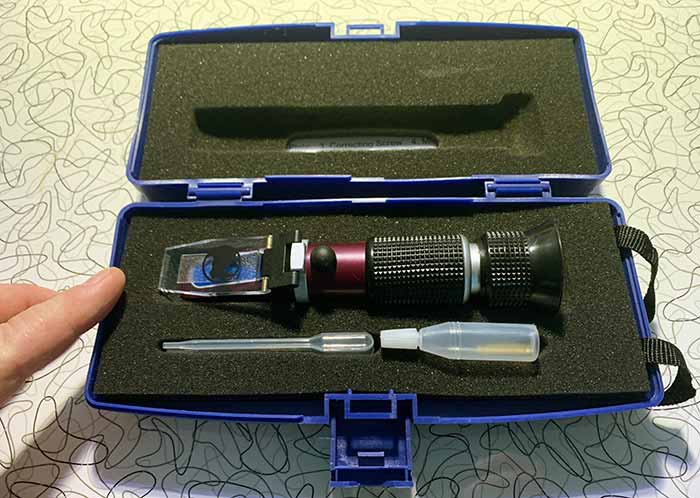 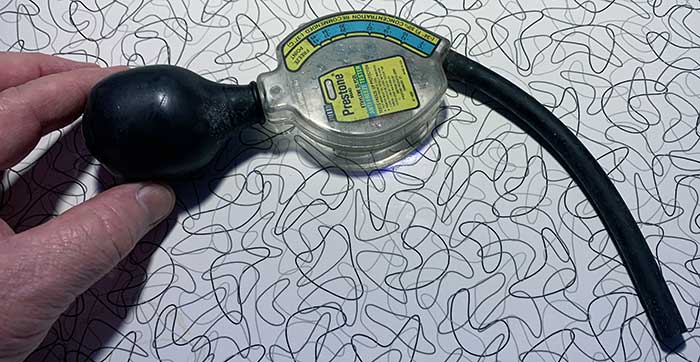 You'll need at least one of these items to check that you have the proper ratio of antifreeze to water (clockwise from top left): ball gauge, coolant test strips, a ­refractometer, a hydrometer. (Photos: Frank Lanier)

Simply opening the reservoir cap and dumping in extra antifreeze in efforts to increase freeze or boil-over protection will likely result in a mixture with too much antifreeze (ethylene glycol).

Exceeding an 80% concentration of antifreeze can also cause silicate gelling (shown below), a condition where the silicate corrosion-inhibiting additive of the antifreeze drops out of suspension, forming a greenish goo that clogs the system and reduces heat transfer. If gelling occurs, the system must not only be drained but also fully flushed before adding new, properly mixed coolant. 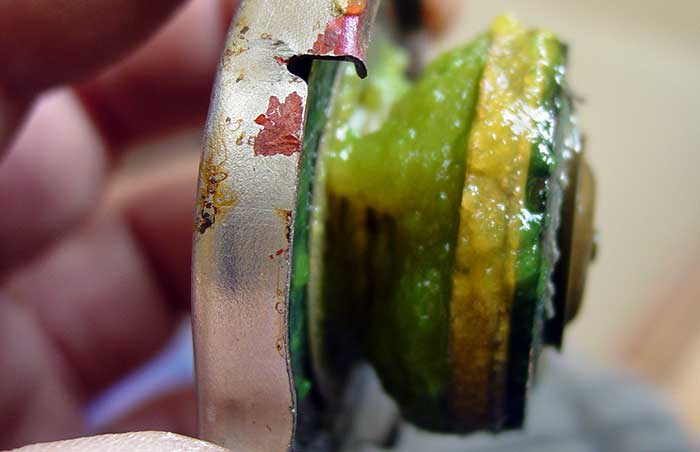 If water needs to be added, the best choice is distilled water. Tap water contains dissolved minerals, which can react with and reduce the effectiveness of the corrosion inhibitors. Softened water has fewer minerals but contains salts, which can be just as bad. Distilled water contains no acids, salts, or minerals and is pH neutral, all of which help maximize coolant service life.

The only way to verify a proper ratio of antifreeze (ethylene glycol) to water is to measure the coolant with a floating ball gauge, hydrometer, test strip, or refractometer.

A floating ball gauge is the cheapest of the testers. It resembles a miniature turkey baster with small colored balls inside a clear tube. It has a squeeze bulb on one end and a short section of hose on the other.

To use a ball gauge, stick the hose into the coolant reservoir of a cold engine, press the squeeze bulb and release, allowing it to suck coolant into to tube, filling it. Remove the tube while quickly placing your finger over the end (to prevent it from draining). Hold the tube upright, flick or tap the tube to shake off any air bubbles clinging to the balls, and observe how many of the balls are floating, the number and location of which will indicate the strength of the coolant as compared against the provided scale. 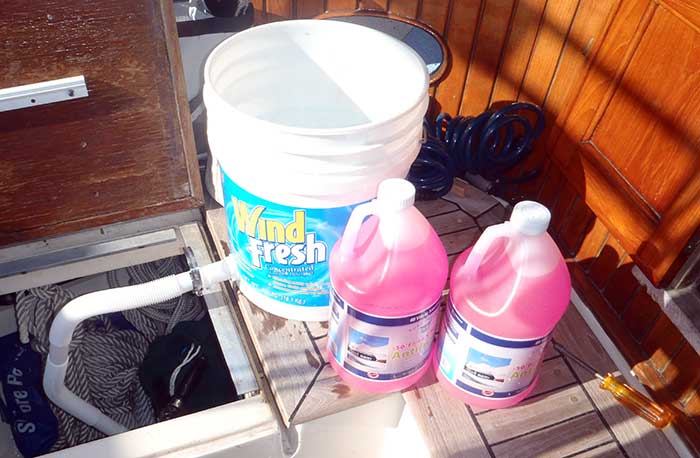 Hydrometers work in the same fashion but use a pivoting arrow or float instead of balls to indicate coolant strength.

A refractometer uses a prism to determine the strength of your coolant. To use, simply place a few drops of coolant in the unit, point the lens toward a strong light source (it doesn't require any power), and look through the eyepiece. A scale will be visible that shows the coolant concentration of ethylene glycol. Many will also have additional scales, allowing you to check the concentration of fluids such as battery electrolyte or windshield wiper fluid.

While the rate of corrosion inside your engine depends on a number of factors (such as the presence of minerals or other impurities in the coolant), a prime consideration is the pH of the coolant itself. Corrosion-inhibiting additives are added to coolant to make it more alkaline, and it will continue to protect your engine from corrosion as long as it remains that way. When it goes acidic, however, corrosion can start.

To keep coolant pH alkaline for a reasonable length of time, it must contain enough corrosion inhibitor to neutralize the acids formed from glycol degradation, which occurs normally during use as the coolant ages. This coolant-neutralizing capability is called "reserve alkalinity," and how long it lasts varies depending on the quality and type of additives used in the antifreeze as well as heat, impurities, and dissolved oxygen, all of which can deplete these inhibitors over time. The goal of the boat owner is to monitor the coolant and replace it with new before all the reserve alkalinity has been used up.

A Rainbow Of Colors

Back in the day, coolant color was simply a result of the type of chemicals added to prevent corrosion. This meant that you could actually tell a lot about a coolant simply based on its color.

Next came Organic Acid Technology (OAT) coolants, which were chemically improved to provide better protection and extended coolant life. OAT coolants can be either straight OAT or a blend of IAT and OAT chemicals, the reason they are sometimes called "hybrid" coolants.

Today, there is no reason for coolant to be any specific color, meaning it is strictly a manufacturer's choice. This makes it pretty much impossible to tell anything about the chemicals used in the coolant by its color or, even worse, to choose a coolant based on color alone. Some older engines may not be able to use newer coolants, while some older-type coolants are not suitable for use in new engines.

The golden rule with regard to coolant selection is to go colorblind and simply use the coolant specified by your engine's manufacturer.

When Should You Change Your Coolant?

While you should always follow the guidance provided by your engine manufacturer (which will take into consideration the type of coolant used), coolant generally should be changed every five years or after 1,000 hours of use.

When changing your coolant, drain out the old coolant and flush the system thoroughly (again, per the engine manufacturer's directions) before adding the new coolant. This ensures all of the old coolant is removed while also helping to dislodge any deposits that may have formed.

Capt. Frank Lanier is a SAMS Accredited Marine Surveyor with more than 40 years of experience in the marine and diving industries. He’s also an author, public speaker, and multiple award-winning journalist whose articles on boat maintenance, repair, and seamanship appear regularly in numerous marine publications worldwide. He can be reached via his YouTube channel “Everything Boats with Capt. Frank Lanier” and website captfklanier.com.