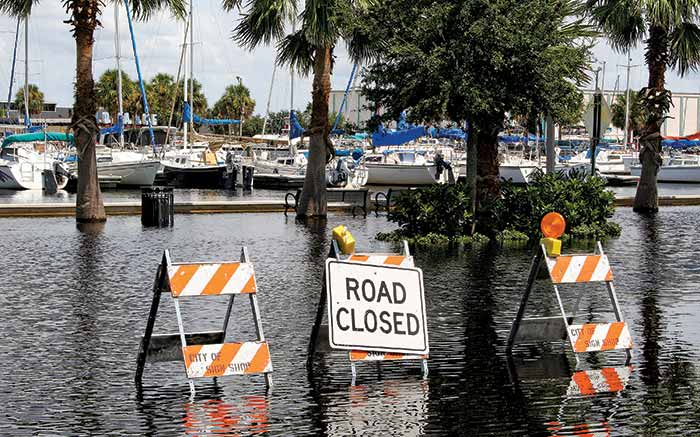 It's all about the heat! In the article "How Drought Is Affecting American Boating" featuring our exclusive report on how rising temperatures and extended drought are causing water levels at America's most treasured freshwater lakes for boating — such as Powell, Tahoe, Mead, and others — to drop to, well, unboatable levels. This month, we move to the coasts and take a look t how rising sea levels are beginning to have a profound effect. Sinking freshwater levels inland and rising coastal sea levels — and this is happening globally — may seem contradictory, but the causes are the same — some naturally occurring, such as erosion and land settling; and some man-made, such as ground water depletion and burning fossil fuels.

In the West, according to NOAA, an extended run of record-high average temperatures have given California its six warmer years, spanning more than a century of recordings since 2014. The hotter climate results in less mountain snowcap, and an earlier melt of those smaller snow packs, leading to drier soil, faster evaporation, and receding water levels. Until we can cool things down, by burning less fossil fuels and thereby reducing destructive greenhouse gasses, the region's self-sustaining water cycle will be increasingly stressed.

Heat is also an underlying contributor to rising sea levels. Globally, sea level has risen by 6.5 inches since 1950, and humans have adapted. The problem is that the last three of those inches have happened quickly, in the last 20 years, according to SeaLevelRise.org, a nonpartisan educational platform dedicated to studying the risks, causes, and solutions to sea level rise. (SeaLevelRise.org publishes info gathered by the First Street Foundation of 180 leading academic and industry research partners whose mission is to make climate risk accessible, easy to understand, and actionable for individuals, governments, and industry using a peer-reviewed approach.)

With the Arctic melting at a record pace, global sea levels are creeping up 1 inch every five years, and coastal communities are scrambling to reengineer how they're set up to cope with our shifting waterfronts. This affects marinas, harbors, breakwaters, bridges and roads, waterfront cities and towns. If you live and boat in a flood zone anywhere near the coast, you've seen the change firsthand. This month, let's zero in on our marine infrastructures and waterfronts, which are of the most interest to BoatUS Members.

So, What Does This Mean For Us?

With increased tidal and storm surge flooding iconic boating meccas during heavy rains and king tides — such as in Annapolis, Maryland; Miami, Florida; Seattle, Washington; Charleston, South Carolina; New Orleans, Louisiana; and Newport, Rhode Island, among others — rising sea levels are having an increasing impact on some of America's most popular ports.

According to the National Oceanic and Atmospheric Administration (NOAA), U.S. coastal communities as a whole saw a national median of four high-tide flooding days in 2020, twice as many as they saw 20 years ago. By 2030, high-tide flooding is projected to be in the range of 7 to 15 days a year, and by 2050, between 25 to 75 days, with some communities seeing as many as 180 days a year. 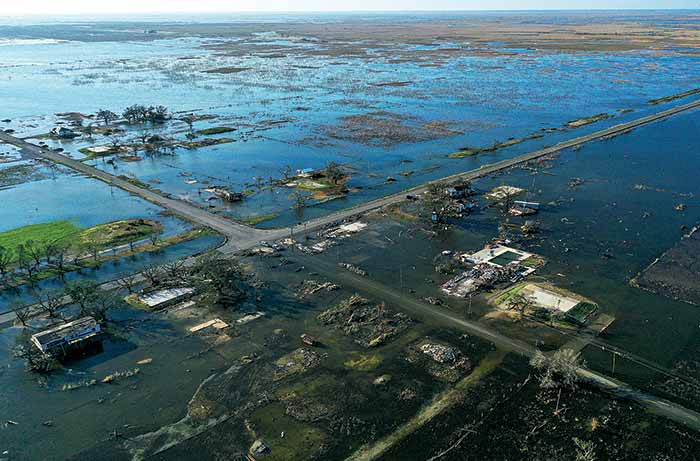 These may seem like far-off dates, until you remember it's already 2022 and scientists predict U.S. coastal communities can expect flooding to be 10 times worse than it is now. Humans will adapt, as always, but first we should know what we're facing.

Sizing Up The Challenge

US Harbors, a free online service that provides marine weather, tides, boating, and fishing information for more than 1,400 harbors in 30 coastal states, recently hosted "Rising with the Tide: Keeping Our Communities Above Water," a free conference for coastal communities to learn about sea-level rise and changing coastlines. Presenters included scientists, planners, and politicians. Among them was John Englander, an oceanographer, consultant, and leading expert on sea-level rise, who explained what's causing sea-level change and how much we can expect it to rise in the future. Englander is also listed as one of SeaLevelRise.org's local experts.

"The two major causes of sea-level rise globally are ice from land entering the sea, and meltwater from melting ice on land entering the sea," said Englander. "The third cause is thermal expansion of seawater; as the oceans warm, they slightly expand in volume." The biggest problem is ice on land — glaciers and ice sheets. "When a glacier calves off, becoming an iceberg, and that big chunk of ice enters the sea, that's like adding another ice cube to a glass of water," said Englander. "Then, as ice on land melts and turns into water and works its way to the sea, that adds more to sea level, like adding water to our glass."

Most of the ice causing sea-level change comes from Antarctica and Greenland, both of which are covered in a 2-mile-deep ice sheet. To give an idea of scale, Antarctica is larger than North America, and Greenland is about the size of the eastern United States. Englander estimated that if all that ice melted, global sea level would rise by 212 feet.

"Rising seas and shifting shorelines are now unstoppable," Englander explained, because the planet is now warming at such an accelerated rate and our ice is melting. In the last decade, sea levels have been rising by almost 0.2 inches (5 mm) per year, and that rate of rise is accelerating. While 0.2 inches per year globally may not sound like a lot in absolute terms, it has a disproportionate impact at a local level. "Locally, there's subsidence and uplift, land can move up and down, which can have an amplifying effect," said Englander.

For instance, researchers found that most of New Orleans subsided by 0.3 inches per year relative to global mean sea level between 2002 and 2005, with the hardest-hit areas sinking by more than an inch per year. Scientists have proposed several possible contributors to the subsidence in New Orleans, ranging from natural causes like shifting faults to human ones such as draining wetlands, diverting sediment-bearing floodwaters, and pumping groundwater.

Alaska, on the other hand, has seen relative sea levels appear to decline because the land is rising due to shifts in the earth's tectonic plates and a process called "isostatic rebound." In the last ice age, heavy glacial ice pushed that land down and compressed it. When that heavy ice retreated, the land began to spring back to its original form. Despite this, sea levels also will eventually rise faster than the land in Alaska, according to SeaLevelRise.org.

What Needs To Be Done

Englander suggested that a reasonable planning horizon for designers of marine waterfront businesses, coastal buildings, and public infrastructure is 10 feet of sea-level rise over the next 100 years, which would mean 5% of the planet's ice had melted. "This depends on how warm we let the planet become."

For instance, Maine, a state expected to see a 1.5-foot sea-level rise by 2050, is anticipating $17.5 billion in coastal building damage and 20,000 jobs lost, according to the Maine Climate Council, and the disappearance of valuable coastal ecosystems — not to mention declines in fish stocks. Maine's warming waters are already becoming less hospitable to cold-water species like cod and lobster, which have been moving northward in response.

It's a timely and important issue for Sen. Angus King of Maine, who made the opening remarks at the Rising with the Tides conference. "The inevitability of rising sea level is upon us," said King. "Areas that have occasionally flooded at a king tide are now flooding much more frequently. ... It's already happening in Miami. It's going to happen in all of our coastal states."

Initiatives to protect coastal communities have been gaining steam at the local, state, and federal levels. For example, Newport, Rhode Island, has been working to safeguard its many historic buildings around the harbor. In January 2020, Newport's Historic District Commission voted to adopt design guidelines making it possible for owners of historic properties in the Federal Emergency Management Agency (FEMA) Flood Zone to apply to elevate their buildings, providing certain guidelines are met.

The city of Norfolk, Virginia, one of the most flood-vulnerable cities on the East Coast, has spent years conducting flood research planning. In January 2022, it was announced that the city will receive $249 million from the U.S. Army Corps of Engineers to construct surge barriers, levees, and pump stations, to build up the downtown floodwall.

In response to hurricanes Katrina and Rita, Louisiana developed a master plan for coastal restoration and risk-reduction projects. As of 2019, boaters have seen firsthand that the state has constructed 60 miles of barrier islands and berms, built or improved 315 miles of levees, and in so doing benefited over 46,058 acres of coastal habitat. 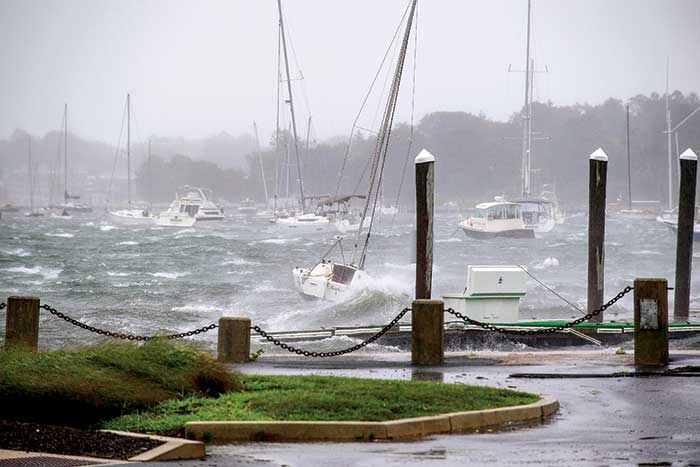 The West Coast isn't immune to rising seawater and has an additional challenge: El Niño weather patterns can worsen coastal flooding due to that expansion of seawater as it warms. Oregon is monitoring its dikes and levees that protect coastal estuaries, and has developed an adaptation framework for how the state should respond to sea level rise. Washington has a three-year Coastal Resilience Project to help the state rapidly enhance its ability to prepare for sea level rise. And California is spending billions of dollars on critical state and local infrastructure improvements.

Here are some highlights: NOAA will receive funding for several critical mitigation programs, including $492 million to map and forecast inland and coastal flooding, and $491 million to help prevent flood damage in coastal communities by restoring natural ecosystems. FEMA will receive $700 million for its Flood Mitigation Assistance (FMA) program, which provides grants to reduce flood risk to buildings insured by the National Flood Insurance Program. Another $1 billion will go to FEMA's Building Resilient Infrastructure and Communities (BRIC), which will help our communities plan and build resilience before extreme weather strikes.

Rising sea levels are presenting new challenges to boatyards and marinas, such as increasing maintenance, flood repair, and insurance costs, not to mention significant investments in facility upgrades such as flexible floating dock systems that will float up with rising water. But keep in mind, this problem is in your hands; be a proactive boater. In the immediate future, know that, during the rising water of a tropical storm or hurricane, your boat will be much safer in a marina or private dock that has the high-water upgrades discussed above. If your boat is tied to a rigid dock, however, and you're threatened with a more challenging storm, move it to a safer location or take it out of the water until the weather passes. (Check your GEICO insurance policy to learn more about getting reimbursed for hauling or moving your boat during a named storm.)

In the big picture, keeping our communities above water and our waterfronts protected is a growing national issue that will require a coordinated approach from all of us — government, industry, property owners, and the public, said Sen. King. He urged us to take the threat of rising sea levels seriously, to learn and get involved, and to proactively call our representatives and tell them it's time to take action. He also emphasized how important it is that our lake and coastal communities come together and share best practices and ideas. "An ounce of prevention," he said, "is worth a pound of cure in this case."