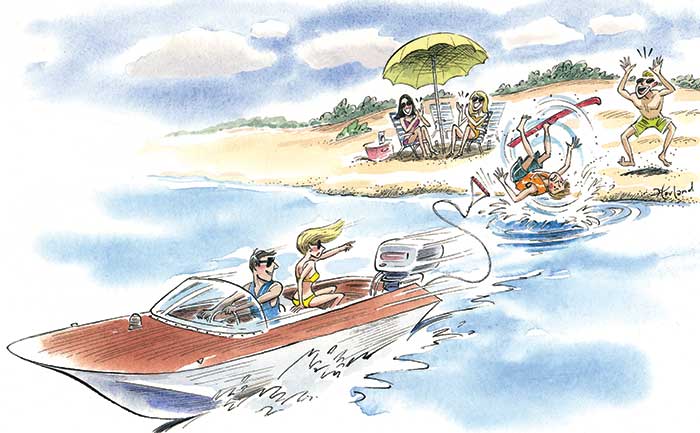 In August 1965, I got together with my best friends from high school (Bill, Dave, and John) at Lake Berryessa in Northern California, shortly before heading back to our respective colleges. I'd built a 14-foot, 40-hp outboard ski boat from a kit two years earlier. Bill, John, and I brought dates. (I would marry mine, Antoinette, three years later.) It took us three trips to shuttle ice chests, beach chairs, and a barbecue to set up a little day camp not far from the marina.

We all got up on two skis. Dave tried, and failed, to teach me how to get up on a single ski from the beach without getting wet. We barbecued hamburgers and hot dogs, and ate Antoinette's chocolate chip cookies. It had been a great day but was getting late. Tired, sunburned, and happy, we loaded all seven of us — and the gear — into the little boat to limp back to the marina in a single trip. The boat had maybe 6 inches of freeboard, and there was no way it could get up on a plane, but it was mostly inside a no-wake zone, and we got in safely. Young and stupid, I know.

We said our goodbyes and promised to do it again the next year. But by that next year, the Vietnam War would rear its ugly head. Bill, Dave, and I were soon active duty military. We remained lifelong friends, but it was the last time that the four of us would be together at the same time. I've now been boating for almost 60 years, but I will always remember that classic "American Graffiti" day.

My Old Man And The Sea

A son remembers some wild days boating with his legendary satirist and his larger-than-life father, William F. Buckley.