Boating On The Erie Canal: Looking Ahead

Is the Erie Canal a viable cruising destination in the 21st century? BoatUS is playing a key role in crafting its boat-friendly future. 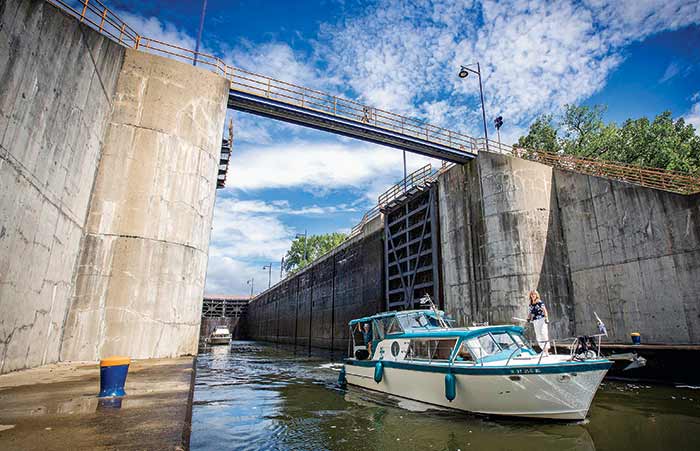 The iconic Erie Canal we all learned about in grade school is now 198 years old. The engineering triumph that created a navigable water route from New York City to the Great Lakes, opening up commercial trade and spurring a development boom of inland cities and towns, needs to be adapted for the 21st century.

Commercial ships and barges are now a rarity on the 364-mile canal from the Hudson River to Lake Erie, leaving a bucolic aquatic highway dotted with small-town charm largely to recreational boaters and cruise vessels. It's part of the larger New York State Canal system composed of the Erie Canal, the Oswego Canal, the Cayuga–Seneca Canal, and the Champlain Canal. The system is owned and operated by the New York State Canal Corp., which wants to make the canal economically viable and stimulate economic growth for communities along the waterway. Complicating the issue is a lack of accurate statistics about boating use.

"There are lockage numbers that supposedly count boats through locks, but they are unreliable because multiple boats can pass through at a time. There are lots of launch ramps, so many boats use the waterway and never pass through a lock," explains Peter Wiles, co-founder of Canal New York, a group dedicated to promoting businesses and communities along the canals and a partner in the BoatUS-created Erie Canal Working Group. "The inability to answer that question is one of the problems to understanding how to best manage the system."

A 2016 study of permit passes sold that season indicated about 21,000 motorized pleasure boaters use the state canal system, of which about 5,100 go through locks/lift bridges. "Since 2017, permit fees on the canal system have been waived. Therefore, we currently do not have a good mechanism to collect boat traffic data, but we are exploring ways to better capture that information in the near future," says Shane Mahar, communications strategy manager for the New York Power Authority (NYPA), which controls the Canal Corp. No decisions have been made regarding permit sales for 2022, he added.

Further complicating the effort is an aquatic invasive species (AIS) problem. Water chestnut is a plant that forms dense mats of floating vegetation that can hinder vessel navigation. Zebra mussels create massive colonies that siphon nutrients from the water, which native mussels need, while also clogging water conveyance infrastructure (not to mention intakes on boats). Both are a growing problem along the canal. Unfortunately, the canal's greatest asset — connecting the Atlantic Ocean to the Great Lakes — is also something of a liability as it connects five major state watersheds to both the Great Lakes and New York Harbor, which empties into the Atlantic.

The NYS canal system is typically open from mid-May through mid-October. This year, it is scheduled to open May 20. Cruising the historic waterway, expect scenic vistas, abundant wildlife, numerous sites of interest, and quaint communities (some more boater-centric than others). There are more than 80 public boat ramps along the system.

The state is attempting to convert a waterway designed for utilitarian use into a world-class recreation corridor. New York's more than 524 miles of interconnected navigable inland waterways and 750 miles of continuous trails is well-suited as multi-day and multi-recreational playgrounds for boating, cycling, paddling, and hiking.

Since about 80% of upstate New York's population lives within 25 miles of the Erie Canal, "it definitely isn't just cruisers," Wiles says of the canals. "On weekends, you'll regularly find yourself sharing the locks with small yachts, fishing boats, kayaks, canoes, tour boats, and pontoon boats — all enjoying the waterways at the same time."

The canal remains a vital cruising artery for boats navigating the Great Loop, a 6,000-mile inland route that links Canada with Florida. Each year, hundreds of "Loopers" motor through the state canal system, spending money in local shops, restaurants, supply stores, boat repair yards, and marinas along the way. There are also snowbirds, who seasonally migrate through the canals to move between summer cruising grounds in upstate New York and the Great Lakes, and winter ports in the south.

New York is addressing these and other problems with its "Reimagining the Canal" initiative, announced in January 2020, with an additional $300 million in funding over five years to revitalize the Erie Canal corridor. Beyond that, the New York Power Authority annually spends $140 million for the canal's continued maintenance, operation, and infrastructure. The "Reimagine" initiative had several objectives including identifying ways to leverage the canal to support and boost local economic development, enhancing recreation and tourism along the canal, and assessing how the canal can mitigate impacts from flooding and ice jams to improve resiliency and restore ecosystems.

In its first year, Reimagine strategically managed certain movable gates to extend and improve angling along Lake Ontario tributaries that are fed with Erie Canal water in Western New York. "We're working with local tourism folks to give them a more accurate schedule of water releases to help promote and support their local fishing industry," Mahar says. An Iconic Lighting program launched in 2021 literally puts a spotlight on iconic infrastructure, such as the Verona Beach and Brewerton lighthouses on Oneida Lake and the through-truss mechanical lift bridge that crosses the canal in downtown Fairport, to further promote tourist appeal. The state's On the Canals program, which markets boating, biking, paddling, fishing, and birding on the canal, will continue for a third year.

Less visible than the marketing campaign and infrastructure work, another component to the initiative, the Canal Corporation commissioned a task force in 2019 to evaluate how to use canal infrastructure to mitigate threats posed by current and future AIS. To this end, dozens of scientists, lake association representatives, research organizations, and academics partnered to better understand AIS threats, existing mitigation efforts, and potential deterrents. Thirty-six potential deterrents were considered, including closing certain guard gates and locks, boat-lift inspection/wash-down stations, barrier screens, and bio-acoustic fish fences.

"Due to the complexity of the issue, the task force recommended that we further study how to best mitigate aquatic invasive species, and that is what we're doing," Mahar says. "There are no conclusions or recommendations at this time."

Boaters interested in keeping up to date on developments are encouraged to visit canals.ny.gov and sign up for the Notice to Mariners email. The site also provides a link to the Canal Corporation's social media accounts.