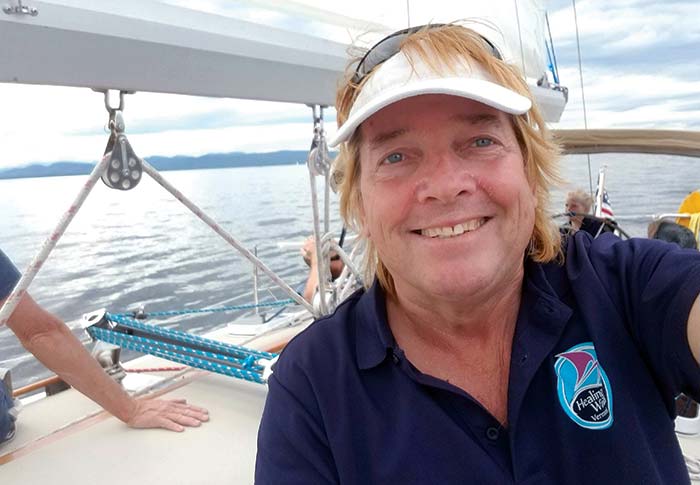 Kym particularly enjoys sailing south to Florida for the winter, savoring freshly caught seafood and visiting the charming seaside towns along the way.

When he was young, Capt. Kym Ketchum had his sights set on being a Grand Prix show jumping rider. Now in his 60s, and with years of experience as an equestrian photographer and sailor, his dreams have shifted. Being a self-proclaimed Peter Pan, though, Kym has plenty of time ahead of him.

Kym grew up on a horse and dairy farm in Vermont and began sailing on a Sunfish on Lake Champlain. As a teenager, he took a job as a horse groom. Eventually he made his way to Wellington, Florida, a hotbed of top equestrian sport, where he spent 30 years working the winters taking photos at large equestrian events as well as jobs doing family portraits and weddings for the area's equestrian families.

Eventually, though, it was time to go home. Four years ago, he was living on his sailboat in Florida when he decided to move back to Vermont to help his elderly parents.

"I moved off the boat and came home in the fall of 2018," Kym says. "Come spring, however, I was just sick for the water and heard about Healing Winds. I thought, 'Oh, that would be a good way to get out on the lake.' My original idea was I would help out this nonprofit so I could sail, and then I started taking people out."

Healing Winds is a nonprofit formed in 2014 to offer "a reprieve for those affected by cancer and all who love them." Located in Burlington, Healing Winds takes guests going through cancer treatment on a three-hour sail on Lake Champlain, which is flanked by Green Mountains of Vermont and the Adirondack Mountains of New York.

"It was this incredible transformation for me," Kym said. "I had no idea the affect that taking these people out on the boat would have on them. You know, I've sailed my whole life, so a lot of stuff I take for granted. Most of these people have never sailed. They are just in awe of the wind and how it moves the boat." Kym, now the lead captain for Healing Winds, has received many letters from those who've been out sailing with him expressing appreciation for being able to get outside, be with family, have fun, and forget about cancer for a few hours.

While the work is meaningful and he gets to do what he loves, it's not without challenges. He finds it difficult to take people out and then learn a few weeks later that person has died. But, he says, by listening to people while they are on the boat and hearing how much the experience means to them, he is able to focus on how rewarding it is to provide them that positive time on the water.

"I've always been a Peter Pan," he says. "I ski, I bike, travel, hike, and I love teaching. Sailing and skiing are my passions, and I love passing that on to someone else.