Is A Flare-Disposal Solution On The Horizon?

Might there soon be a solution to the expired flare disposal issue? 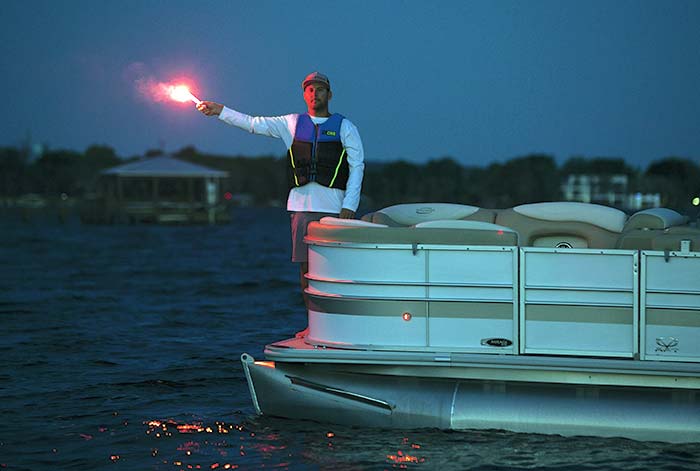 If you've ever asked yourself, "What should I do with these expired flares?" you've probably made a few phone calls, found that no one will take them, and out of sheer exasperation, stashed them in a locker or chart table. Out of sight, out of mind — at least for another three years. If you were to poll boat owners on your dock, you'd hear a slew of creative answers, ranging from pragmatic (keeping them aboard as backup) to hazardous (throwing them overboard or in the trash) to just plain illegal (using them as fireworks on the Fourth of July).

But it's not just boaters who are at a loss for how to dispose of them. It's a problem that has dogged businesses, state and local governments, and the Coast Guard for decades. Fortunately, there have been recent developments that may provide lasting solutions. Let's take a closer look at the problem and some of the leading initiatives to address it.

Why It's So Hard To Dispose Of Flares

Pyrotechnic flares expire 42 months after the date of manufacture, meaning boaters have to replace them roughly every three boating seasons. A 2014 study sponsored by the U.S. Coast Guard concluded that most boaters (between 66% and 88%) either do not dispose of flares or do so illegally. With close to 12 million registered recreational boats in the U.S., most of which are required by the Coast Guard to carry flares, flare disposal is a massive and mounting problem.

So, then, why will nobody take them? Expired flares are considered not just hazardous waste, but explosive hazardous waste. Sharing some characteristics with ammunition, they are treated with similar precaution. The Department of Transportation (DOT) considers them Class 1, Division 1.4 explosives and dictates how they can be shipped. The Bureau of Alcohol, Firearms, Tobacco, and Explosives requires that they be stored in a "Type 4" fire-, weather-, and theft-resistant magazine. 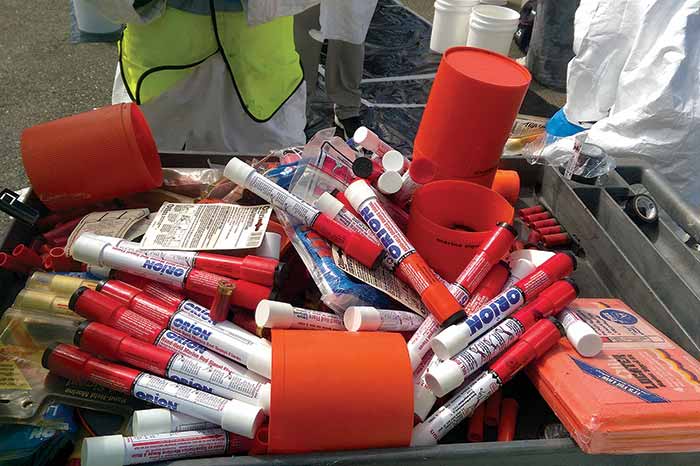 Some of the expired flares collected at a NASBLA-sponsored collection event in California.

Expired flares that are thrown into marina or household garbage go on to wreak havoc on human health and the environment, which is why the Environmental Protection Agency (EPA) regulates how they can be disposed. Flares contain perchlorates, chemicals that can quickly dissolve and contaminate ground and surface water.

Perchlorates are known to cause endocrine system and reproductive problems, and the EPA considers them "a likely human carcinogen."

A 2004 Rhode Island Department of Health study found that a single highway flare could contaminate 240,000 gallons of water, roughly the amount of water that 10 people will drink over the course of their lifetimes. Perchlorate contamination is a significant problem in the U.S., where it's estimated that some 11 million Americans live in areas where perchlorate levels in drinking water are significantly higher than what is considered safe.

Given the hazard they pose, there are considerable costs associated with legally transporting, handling, and disposing of expired flares. A 2014 study sponsored by the Coast Guard found the average cost to dispose of a flare at one of two EPA-approved incinerators in the country, was $3 per flare, not including transportation costs. While this represents roughly 33% of the retail value of a standard red handheld locator flare, consumers are not charged a disposal fee, and manufacturers and retailers bear no responsibility for disposal costs.

Though $3 per flare may seem a hefty levy, the Coast Guard study noted that "price is an unavoidable hurdle in any solution." Though it's illegal to set off flares in non-distress situations, the Coast Guard and other agencies spend millions of dollars responding to hoax calls.

Do Flares Really Degrade Over Time?

When the BoatUS Foundation team conducted a flare test in 2015, they took the opportunity to fire some expired flares. What did they find? The expired flares didn't burn as bright or fly as high as unexpired flares. Flares do, in fact, degrade over time. However, given that pyrotechnic flares only provide a few minutes of burn time, many boaters store expired flares aboard as backups.

How Government Is Addressing The Issue

State and local policies and programs are popping up across the country to tackle the problem.

On February 17, 2021, Rep. Joyce "Jay" McCreight proposed a bill (LD 514) in Maine's legislature to create a program that would collect and dispose of expired flares using a mobile incinerator. John Lee, BoatUS Government Affairs liaison, said, "If passed, the bill would make Maine a national leader on an issue that has vexed boaters, government, and environmental advocates for decades. It could help solve the huge dilemma of how to safely dispose of these hazardous materials."

This is the third time that McCreight has introduced the bill. Last year the bill died (along with hundreds of others), when the legislature adjourned due to the pandemic. "This is a doubly frustrating situation," said McCreight. "Having a safe, nonpolluting method of disposal to keep flares out of the waters and landfills as well as basements and sheds was the primary motivator. The other is the need for the public to be educated on the risks and solutions."

At press time, the bill had passed the Maine state legislature, funding for it was included in the state budget, and it was awaiting the governor's signature.

"Nobody is doubting the need," she said. "The fire marshal certainly didn't anticipate that he'd get 2 tons [of flares]," said McCreight, "and that was three years ago. There's been more since then." 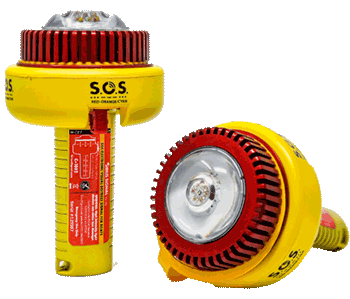 Electronic visual distress signal devices, or eVDSDs, have been available for several years and are an environmentally friendly alternative to pyrotechnic flares. They use LED lights designed to mimic the light output of a traditional handheld flare or signal SOS. In June 2018, the Coast Guard published a new standard that allows for a more conspicuous type of eVDSD to come to market and in 2020, Sirius Signal released the C-1002, the world's first two-colored plus infrared eVDSD.

PROS: They don't expire, meaning you don't have to replace and dispose of them every three years, nor are they hazardous to human safety, health, or the environment.

CONS: They're more expensive. Coast Guard-approved models retail for $90–$300, roughly two to three times the price of a four-pack of handheld daytime and nighttime red locator flares. Currently only the C-1003 model, which comes with an orange distress flag and whistle, meets daytime requirements. Otherwise, boaters must carry them in conjunction with a daytime signaling device (e.g., orange flag, approved smoke signal, or flares)

BoatUS Members save at least 10% on Sirius Signal eDVSDs plus free shipping. Get your exclusive promo code by logging in to your BoatUS account, choose "Resources," and click on the Sirius Signal logo.

What You Can Do About It

Despite the great initiatives being led at state and local levels, the vast majority of boaters have no real options but to stockpile expired flares in their boats and basements. Some municipalities do accept flares or have specific dates where these types of hazardous materials are collected. Check with your local municipality or visit earth911.com for options.

If you want to see flare disposal programs in your state, "talk to your legislator," said McCreight, who first learned about the flare disposal issue from one of her constituents, a Maine lobsterman. Visit BoatUS.com/Gov for information on how to contact your local representatives and to receive alerts on upcoming expired flare collection events.

So do we finally have an answer about what do with our expired flares? Not yet, but there's definitely a light on the horizon.