Anatomy Of A Boat Collision

We take an in-depth look at the facts behind an actual insurance claim. Who was at fault, and why? 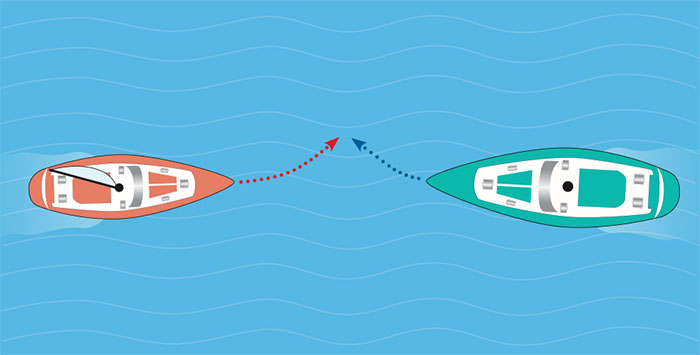 Having an in-depth understanding of the Rules of the Road might have prevented this collision between two sailboats.

The International Regulations for Preventing Collision at Sea, also called COLREGs or Rules of the Road, were adopted in the United States in 1864. Based on common sense, it's been said if all vessels always abided by the Rules, there would be no collisions at sea. In this article, we look at one claim that supports the idea that the Rules are meant to be followed.

The collision: Two sailboats on San Francisco Bay are approaching each other, bow-to-bow, on a collision course. Both boats are under power, each traveling at 4 to 5 knots, and closing quickly. A few seconds before impact, the skipper of the larger boat, a 40-footer, throws the helm hard over to starboard and yells at the skipper of the smaller boat, who responds by turning sharply to port. The two boats collide, with the smaller boat ramping up onto the deck of the larger boat. There were no injuries, but both boats suffered extensive damage.

As is often the case when two boats collide, both skippers insisted the other was at fault. There were no outside witnesses. These sorts of disagreements are typically settled by the respective insurance companies. In this case, however, no agreement was reached, and the claim went into arbitration. Who was at fault?

Discussion: Sails were neatly furled on the larger boat, but on the smaller boat the mainsail was up. The smaller boat's skipper claimed he was "sailing" (A power-driven vessel underway shall keep out of the way of a sailing vessel), but a check of the nearby weather buoys confirmed that San Francisco Bay was uncharacteristically calm that day, and his argument was quickly dismissed by arbiters.

The skipper of the larger boat claimed the collision was solely the responsibility of the smaller boat; after all, it hit him. Again, the investigators were not convinced. One of the primary Navigation Rules (Rule 5) was ignored by both skippers: Every vessel shall at all times maintain a proper lookout by sight and hearing as well as by all available means appropriate in the prevailing circumstances and conditions so as to make a full appraisal of the situation and of the risk of collision. Had either skipper been paying attention, the collision would not have occurred.

The judgment: In most, if not all, collisions, there is more than one cause and usually enough blame to go around, even if on the surface the reasons seem obvious. There is no "right of way" for boats. There are stand-on vessels, which are required to maintain course and speed, and give way vessels, which are required to take whatever measures are necessary to avoid a collision, usually specifically pointed out in the Rules.

As the investigator noted: "Being the stand-on vessel does not unconditionally impart immunity, but rather confers specific responsibilities." The Rules make this apparent: When, from any cause, the stand-on vessel required to keep her course and speed finds herself so close that collision cannot be avoided by the action of the give-way vessel alone, she shall take such action as will best aid to avoid collision. Even if the smaller boat was stand-on vessel, she still may be required to make course adjustments to prevent a collision.

Finally, if the vessels are meeting head on as was the case: Each shall alter her course to starboard so that each shall pass on the port side for the other. The skipper of the smaller boat made the mistake of turning to port, which violated another rule as well: The Rules specifically state that vessels shall not alter course to port for a vessel on her own port side. In a meeting situation such as this, where both parties were not paying attention, a last second turn to starboard by both skippers would not have avoided the collision but likely would have reduced the impact and resulted in less damage to both boats.

After reviewing all the facts gathered by the investigators and the statements from the skippers, the arbiters concluded that, "Based on the diagrams offered by both parties, it is not clear why the two boats did not see each other much sooner than they did. Both parties had a duty for lookout in this case that was breached. That duty was breached slightly longer by [the skipper of the smaller boat]; as a result, he shoulders 60% of the liability for the loss and that portion of the damages." The skipper of the larger boat was responsible for the remaining 40%.