The roots of many phrases and words we use every day can be traced to a life afloat. Here's a smattering of nautical sayings that have come ashore over the years. 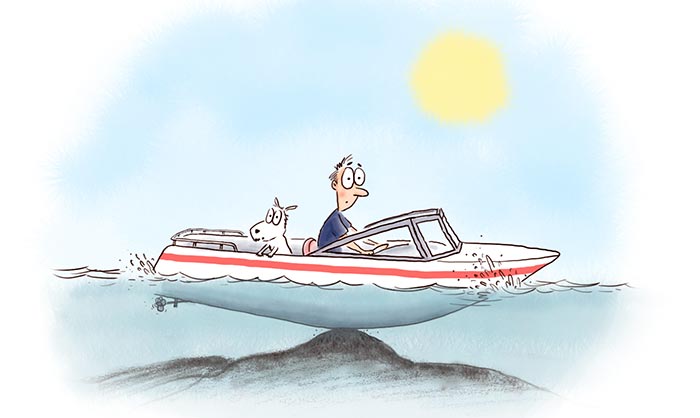 A cup of Joe
The nickname for coffee came about due to the reforms initiated in 1913 by Josephus Daniels, then secretary of the United States Navy under President Woodrow Wilson. One such reform was the elimination of the officers' wine mess, a policy received less than enthusiastically by many. Since that time a cup of the strongest drink allowed on board U.S. naval ships has been referred to as "a cup of Joe."

Bigwigs
Strangely enough, this is one bit of seafaring lingo that pretty much means what it says. Senior officers of Britain's Royal Navy at one time actually did wear bodaciously large wigs after the style of the day. 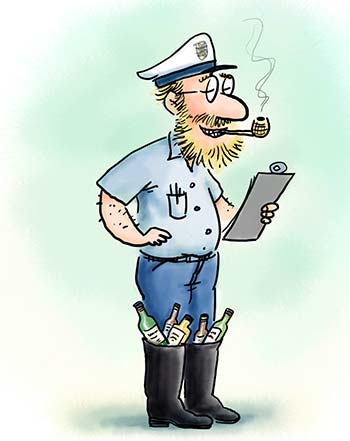 Bootleg
This term for the smuggling of illegal liquor was derived from the sailors' ruse of bringing in contraband by hiding it in the tops of the sea boots.

Carry a bone in her teeth
Phrase used to describe a ship sailing fast enough to foam the water in front of her bow.

Crow's nest
Name for the highest lookout station aloft, a term most likely derived from the old Norse practice of bringing cages of ravens aboard to assist in navigation. If the navigator was in doubt as to the direction of the nearest landfall, the cage was hoisted aloft, and a raven released. The bird invariably headed for land, the navigator noted the direction of flight, and plotted accordingly. Best guess is the lookout stationed aloft likely shared his perch with the feathered members of the crew from time to time, thus the name!

Duffel
A sailor's personal belongings (normally referring to his clothing) as well as the sea bag of coarse woolen fabric used to carry and stow them in. The name probably originated from the Flemish town of Duffel (near Antwerp) where the cloth was made.

Footloose
Uninhibited or spontaneous. The bottom of a triangular sail is called the foot, and a "loose-footed sail" is one attached fore and aft, but unsecured along the boom itself and able to dance freely in the wind if the clew (aft end) is freed.

Dungaree
Webster's Dictionary once defined dungaree as "a coarse kind of fabric worn by the poorer class of people and also used for tents and sail." While we probably couldn't picture our favorite pair of jeans hanging from the yardarm, discarded sailcloth (which was not dyed blue, nor was as well-woven as today's fabric) was often utilized by sailors to make items such as work clothes and hammocks. In fact, it was standard practice for captains in both the American and British navies to exaggerate the amount of sail lost during a battle in order to provide the crew with material. The cloth was called dungaree (from the Hindi word dungri), and the name became synonymous with the clothes themselves.

Gamming
A "gam" was a mutual visit between the crews of whaling ships when they happened to meet abroad. It was there the latest news and gossip was exchanged and yarns were spun amid plenty of song, dance, food, and drink. The word "gam" came from whaleman slang for a pod of whales.

Hard up
Destitute, fallen on hard or trying times, this is derived from "hard up the helm," an order to place the tiller as far to windward as possible during difficult weather, thus turning the ship's head away from the wind so she might ride easier.

But Why Is It Called The 'Head'?

The forward-most part of the ship was originally known as the "bows" or "beakhead" after the ram on the bow of a fighting galley (think beak as in bird of prey). During the Medieval period, the bows evolved into a raised castle-like structure from which archers (and later fighting musketeers) could fire down upon the enemy during battle, which is where the name forecastle (or fo'c'sle) is derived.

Over time, the forecastle devolved into basically a work platform covered with open grating. Due to the continuous flushing action of the sea and its location (which allowed the wind coming forward to carry the smell forward, too, away from the ship), this is where the lavatories or "seats of ease" came to be located, these being nothing more than benches built over holes cut into the grating.

Those who used them were fully exposed to both the elements and the ship's company with at least one Spanish traveler describing with mock sentiment the lovely views afforded the crew of the moon and planets, as well as the tarred ropes (which serve the same purpose as the corncob in rural America) and those impromptu washings provided by the waves. Thoughtful captains often had safety netting strung around the entire area, as it was not uncommon for patrons caught off guard to be washed overboard by larger seas. They could be busy places too, as a typical 18th century man-of-war possessed only six seats of ease for a crew of roughly 800.

Hunki dori
Commodore Matthew Perry's historic visit to Japan in July 1853 began an era of openness and commercial intercourse between east and west. Yokohama was one of Japan's busiest ports at the time, and the main street of the waterfront district, Honki-dori, became famous for its ability to provide an abundance of pleasures to sailors while in port.

While Honki-dori was relatively straightforward and easy to navigate, the winding side streets and back roads were not only confusing but potentially dangerous to unwary sailors (particularly those of the inebriated persuasion) who often fell victim to robbery or worse. Advice was if you stayed on Honki-dori you could probably find everything you desired in relative safety, hence the street name association with everything being OK. 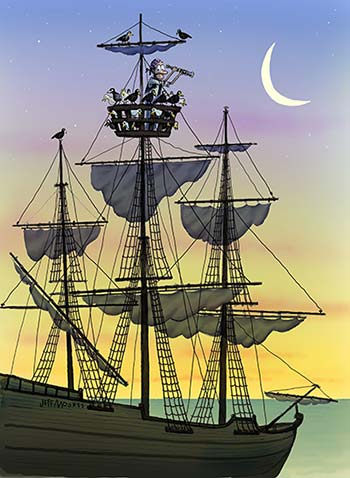 Know the ropes
One requirement of shipping aboard as an able seaman (versus an ordinary hand) was a thorough knowledge of all ropes pertaining to the vessel's operation, which on a square-rigger could equate to miles of cordage. Crew members achieving that level of skill were said to "know the ropes."

Lubber Line
A line marked on a ship's compass that's aligned with the vessel's centerline and used as a reference point showing the direction straight ahead. Even the greenest hand on board could be instructed on how to steer a course by simply keeping the lubber line on the correct heading.

Posh
The late 19th and early 20th centuries witnessed the birth of the golden age of travel. Huge, opulent luxury liners began crossing the globe, all constructed to provide the wealthy of the day a means of traveling about in style — meals equal to the world's finest hotels, orchestras for dancing, a small army of stewards to wait on passengers hand and foot. One perk available for those willing to shell out a little extra was found aboard the P&O steamship line, a major shipping company of the day serving China and India. Well-heeled travelers always requested the cooler cabins located on the shady side of the ship while crossing the Indian Ocean, cabins that P&O charged a premium for in addition to the already substantial fare.

As port was the shady side on the outbound leg (with starboard being the sought-after side on the return or inboard portion of the trip) passengers who requested such cabins had the letters POSH (port outward, starboard homeward) printed on their tickets, introducing a new word for elegant or fashionable into the English language.

Scuttlebutt
The scuttlebutt was a small cask (called a "butt") of water placed on deck each day for members of the crew to drink from, normally by dipping a chained tin mug through a small hole, or scuttle, cut into the barrel's side. The men could drink as often as they liked but were allowed only one cup per trip to conserve water. Another conservation practice was doing away with the scuttle entirely, with the crew drinking from the cask via an old musket barrel shoved through the bung.

As noise had to be kept to a minimum on deck (so commands and orders could be heard) and belowdecks as well (where off-watches were trying to sleep), the scuttlebutt was one of the few common areas where a sailor could relax while mulling over the day's events with fellow Tars. As such, the word itself eventually came to mean "rumors" or "gossip."

Square meal
A solid, hearty meal said to be derived from the square wooden platters hot meals were served upon aboard ship in good weather.

Toe the line
Sailors called to muster were told by the bosun to "toe the line," meaning they were to form up in a straight line, toes to one of the ship's deck seams.

Touch and go
Often used to describe a tricky or delicate situation, this phrase refers to a ship touching bottom with her keel but being able to continue without grounding solidly. It especially highlights those suspenseful few seconds all boat owners experience at some point — that period of alternating curses and prayers between touching bottom and reaching the safety of deeper water.

Windfall
Used to describe an unexpected stroke of good fortune, this is another popular term that has its roots in nautical language. During Britain's emergence as a growing naval power, the crown proclaimed all standing trees of a certain size located within His Majesty's realm belonged to the Admiralty to ensure an adequate supply of wood for shipbuilding. Landowners were forbidden to touch trees so designated. However if one was blown down via an act of God, the owner was free to claim and use this wind fall as he saw fit.

These snippets were excerpted with permission from "Jack Tar and the Baboon Watch: A Guide to Curious Nautical Knowledge for Landlubbers and Sea Lawyers Alike" by our own BoatUS Magazine contributing editor, Frank Lanier. Click here to purchase a copy.