Walleye are an especially skittish fish. Let's tag along with two expert anglers to learn the fine art of fooling them with stealth fishing. 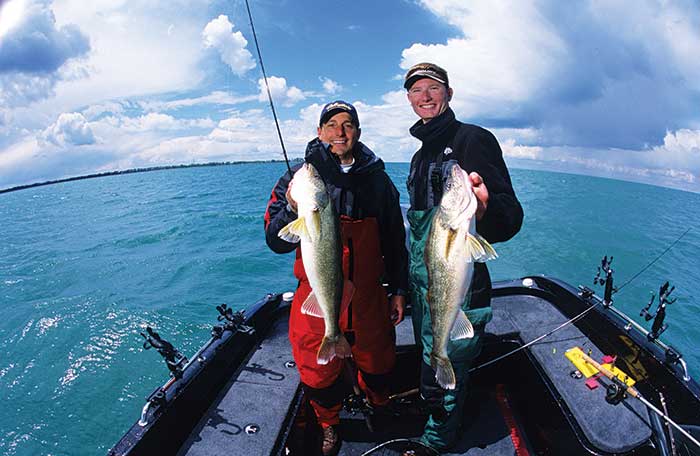 With a storm brewing behind them John and Ross land a double of 5-pounders before its time to head to shore.

Lake Erie in summer is a fisherman's dream — warm, sunny days when fleets of sportfishing boats work nomadic schools of walleyes a quarter-mile across, and hundreds of anglers put fish limits in the box.

But this June day isn't shaping up like that. A vicious wind is throwing hard rain against my motel window at 4:30 a.m., reminding me of another Lake Erie trait; this weather can quickly turn on you. Here is my one day to fish with two of the best walleye anglers on the lake. I want to get in on this rare opportunity, but dawn is breaking bleak and foul.

Walleyes are among the most prized and sought-after game fish north of the Mason-Dixon line. Their finicky nature is notorious, and their delicacy on the dinner table finds them in restaurants around the country. They are found in rivers and lakes from the central U.S. to northern Canada. But in Lake Erie they're found in rare abundance. Shallow Lake Erie (210 feet at its deepest) abounds with food for walleyes, and the western basin has thousands of acres of spawning habitat that brings successful hatches year after year.

My mentors for the day include Ross Robertson of Big Fish Charters in Port Clinton, Ohio, and John Tillman. Ross grew up working on an Erie charter boat and knows the lake well. As a licensed Coast Guard captain, he also knows boats and how to gear up for chasing walleyes. Not only can he catch them, but he enjoys sharing his knowledge.

John, from Merrill, Michigan, is an accomplished professional walleye fisherman who hones his techniques on Saginaw Bay. Versatile and lethal with spinners, he's refined the art of trolling, winning national walleye tournaments and an East Division Angler of the Year on the Professional Walleye Trail (PWT). When these two guys get together, it's a critical mass of walleye wisdom that puts the chances of a successful fishing day way up there — if we can only get on the water.

We're to meet at Rickard's Bait & Tackle in Port Clinton, Ohio, and when I arrive at 7 a.m., both Ross and John are already there. They shake their heads at the morning's weather, and we all agree to at least take a look before we give up on the day. John suggests driving several miles east of Port Clinton to look at another boat landing not so exposed to the northwest gale.

There we can see the lake is rolling with white caps and the color of brown mud as far out as we can see. The rain has passed, but the wind is relentless and will make for a cold and foreboding boat run. We'll either have to fish leeward of an island in the Bass Island group or troll like a roller coaster in wind-driven seas. We're going out in John's 20-foot Ranger 620V. It would be rough, but possible with good rain gear and the right boat and crew comfortable with big water. If anyone can do this well, it's these guys. I'm hoping we go, but it's their call.

They huddle in the truck cabin while looking out at the lake and discussing strategy. They finally get out and tell me it's doable, but it'll be rough and wet, and their destination today would have to be a slow 20-mile run over the horizon. I'm game for anything.

On a normal day this boat landing would be busy. But this morning? We're the only ones here. John and Ross launch in the buffeting wind, and we quickly load the boat up with gear. With only our eyes visible in rain gear zipped to the max, and life jackets snapped tight, we head northwest straight into the wind. For almost two hours we slowly make headway, busting rolling waves, wind blown spray hitting us like BB's. Nobody talks, we just hang on, charging into wave after wave, up and over one at a time. Except for a few ore freighters, we're out here alone southeast of South Bass Island in Put-In-Bay.

Beat up but warm and dry, we reach the lee of an island and find refuge from the wind and waves. The front has passed. The sky has begun to clear. There's just a chop on the water here on the island's quiet side, and John dries off the fishfinder screen and starts searching. "They're here," he says, pointing to sonar hooks all over the screen. They've learned over the years that walleyes historically like this area in spring and summer, probably a bait fish hangout, and it's one of a few spots fishable in a near northwest gale.

John runs upwind of the walleye school, turns around near the shore, and shuts down. They deploy a drift sock off the stern, and the bow swings around and points downwind as our first drift begins toward open water. They dig out Daiwa line counter reels and inline planer boards and start tying on spinner rigs with whole live night crawlers for bait. In a couple of minutes they're ready and deploy a spread of spinners and planer boards. 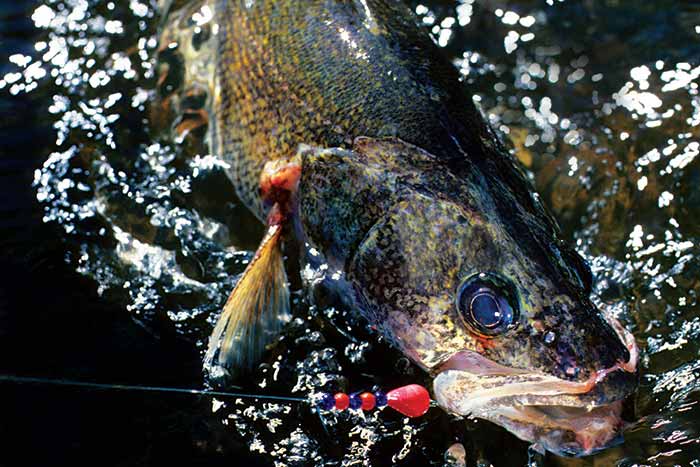 John and Ross make their own custom night crawler spinner rigs that include a treble hook trailer that catches short biting Erie walleyes.

John and Ross have tweaked the crawler spinner rig to perfection. They make their own from 14-20# fluorocarbon line and #4 and #5 blades. The spinners are upscale single hook rigs, but John and Ross add a critical small treble trailer that hangs free near the crawler's tail. Even notorious short strike walleyes get hooked with this rig when they try to take just the crawler's tail. With a 1-ounce inline weight set about 4 feet up from the spinner, they figure at 1 mph the crawler rig is traveling about 8 feet below the surface. They explain that walleyes feed up, meaning it's better to troll above them than below.

Speed is the most important aspect when trolling with spinners, John explains. Ross adds, "The two most important things in my boat to make the right speed and positioning possible are drift socks and electric trolling motors. And I carry at least 10 different sized drift socks. Different sizes and location of them allow for precision speed and location control, even in conditions that have everyone else at the dock."

The stealth approach is the best tactic anytime, so we use planer boards to keep the bait away from the boat, and the wind and electric motors to be quiet. John has one of his largest socks out, and we're drifting silent, straight, and true at 1 mph over 22 feet of water. Before they get all four lines out, the flag on one of the planer boards drops down and the board sags in the water. "Fish on!," Ross hollers, and John picks up the rod. With experienced teamwork, Ross unclips the board as John reels, then Ross reaches for the net as a 5-pound walleye nears the stern. With a quick swish of the net Ross brings the first walleye on board.

There are multiple types of planer boards, but they're all designed to help fishermen cover more trolling area farther from the boat sides (and away from boat noise). When a fish takes the bait, the red flag drops so the angler knows he or she has a fish on the hook (planerboard.com).

And so it goes for more than an hour. As the sky clears and sun warms the morning, walleye after walleye takes the bait. The wind is relentless, but so are John and Ross.

When our drift takes us too far from the island and into big waves, they pull up the gear and run back upwind toward the island for another pass through the fish. First John brings in an Erie trophy more than 10 pounds, then Ross gets an 11-plus. 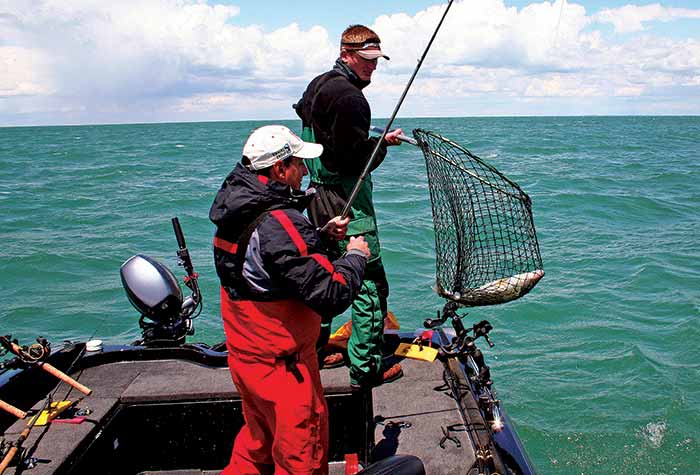 In the middle of a fish-catching frenzy, another 5-pound keeper comes in.

The fish are hitting hot and heavy with at least one coming in with every drift. It's a fish-catching frenzy to behold as John and Ross both bring in good keeper fish at the same time.

The rumble of thunder brings our attention back to the weather. A dark storm is brewing on the western horizon. It's turning into one of those Lake Erie days where you can get beat up in a rainy gale, get sunburned, and then struck by lightning all in the same day. We're bagged out anyway, so it's time to leave.

The 20-mile run is easier downwind, but it's still a gun up and surf down ride in big swells in open water. We're back at the boat landing with a two-man limit of fish (12 total) before noon on a morning most fishermen stayed home. That can happen on Lake Erie when you're on the right spot with the right boat and the right fishermen.

As we peel off rain gear and pack up, we see a couple other boats approaching the ramp at the same time. We asked them how they did and they showed us a thumbs down. They only fished around the breakwater and got nothing, they said, it was too rough to do anything else. When they asked how we did, we just said "OK." They should've seen the 10-pounders we released, and later at the cleaning station we learn the walleyes we kept for the skillet averaged a little over 5 pounds a fish. Only in Lake Erie can you catch walleyes like that.

May and June are considered peak months for walleye fishing on Lake Erie. The Bass Islands region on the western end of the lake is a busy summer vacation destination and can only be accessed by ferry or boat. Early reservations are recommended. Voted one of the top-10 attractions in Ohio, the islands offer a variety of outdoor activities from boating and fishing to kayaking, canoeing, historic winery tours, and fine dining. Cedar Point, not far away on the coast, is the "roller coaster capital of the world" and another favorite family destination. But if it's big Erie walleyes you want, visit Capt. Ross Robertson's website at bigwaterfishing.com and spend a day on the water with him.

Doug Stamm is a U.S. Coast Guard licensed captain, an aquatic biologist turned professional underwater/outdoor photographer, and the author of "The Springs of Florida" and "Underwater: The Northern Lakes." He lives with his wife, Lucy, and their English setter in the Wisconsin River valley of southwest Wisconsin.