Scientists partner with citizen scientists to explore an array of mysterious 'blue holes' of the Gulf of Mexico. 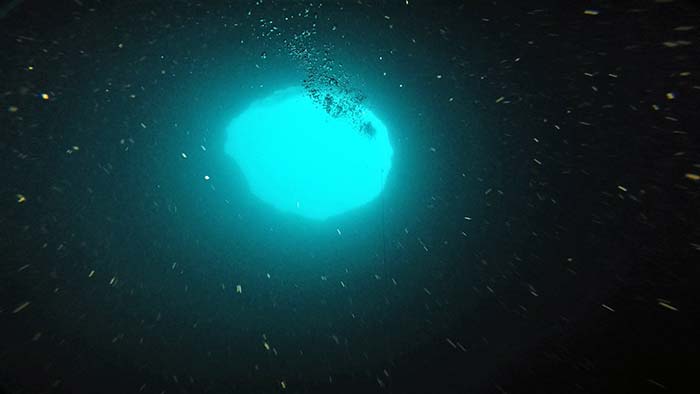 A diver's view looking up to the opening of Amberjack Hole, more than 100 feet beneath the Gulf of Mexico. (Photo: Mote Marine Laboratory)

Deep under the surface, the Gulf of Mexico's continental shelf is pocked with an unknown number of sinkholes, called "blue holes," likely formed thousands of years ago. They are mysterious because, as of now, scientists don't know how many there are, where they are — nor do they entirely know what is in each of them. What they do know is that these holes can be several hundred feet deep with small openings, there is diverse marine life, and that it was fishermen and divers who first found them.

"A lot of the ways we get these [blue hole locations] are from fishermen who have gone out and found some kind of a feature on their depth sounder or find that there's really good fish in these areas, and they report them to us," says Dr. Emily Hall, Mote Marine Laboratory's lead scientist for a two-year project investigating two sites in partnership with Mote Marine Laboratory, National Oceanic and Atmospheric Administration, Florida Atlantic University, Georgia Institute of Technology and U.S Geological Survey.

The partnership, funded by NOAA's Office of Ocean Exploration and Research, explored the Amberjack Hole in 2019. Amberjack Hole is 30 miles off of Sarasota, 112 feet below the surface and then another 350 feet to the bottom. In addition to finding two deceased smalltooth sawfish at the bottom of the hole, the team found that nutrients appear to cycle from the bottom sediment of the hole to the water above the hole and then back down again, creating a positive feedback cycle and possibly explaining the diversity of life in the hole.

"The main entrance is about 100 feet in diameter, but when you get down to about 200 feet there's a restriction and the restriction is only about 20 feet across — that's the hourglass shape. Volunteer tech divers are going to go all the way to the bottom, they're going to go down to 425 feet and at least some of them would like to go deeper if the opportunity presents itself," says Hall, who also explained that a 600-pound piece of equipment called a lander will be lowered down into the hole.

The tech diving teams will take samples and do biological surveys at the bottom while the rim divers will take samples and perform surveys at the rim of the hole. The technical diving done by the volunteers, called "citizen scientists" by Hall, is dangerous, beyond the limits of recreational diving, and requires extensive training. But these citizen scientists also get to go where no other human has likely gone before.

Both anglers and commercial fishermen are encouraged to report if they think they have found a hole. Hall says they are happy to talk with anyone and discuss what they have found and compare any numbers to the locations that the team already has. And while there is no need to avoid these areas, Hall does say they "hope people appreciate these environments are so unique and that the cleaner we keep them, the more the fish are going to stay. Part of our mission is to work with citizens, and hopefully we give something back to them about these really great spots and come up with ways to protect them so they can be open to fishermen and open to divers and not be destroyed."

If you think you have found a blue hole, email info@mote.org.