A young couple makes the profound decision to head straight into a health-care battlefront, by boat, to help those in need. 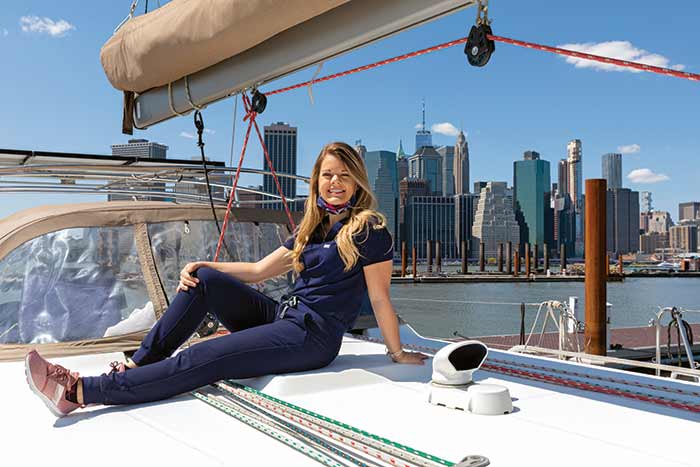 Nurse Rachel Hartley traveled with her husband, Taylor, by sailboat from southern Virginia to New York City to help on the front lines of the coronavirus pandemic. She says the Big Apple's sailing community was welcoming and supportive. (Photo: Taylor Hartley/thartleyphotography.com)

Sailing into the unknown, in this case from Virginia to New York City, specifically to land in the heart of a raging pandemic, takes people of exceptional talent and character. Taylor and Rachel Hartley are such people. Rachel is an ICU nurse at Lynchburg General Hospital. Taylor is a college recruiter, landscape photographer, and passionate sailor.

During the five years she's been a nurse, Rachel was a critical-care ICU nurse for three years, then, for the last two, an anesthesia prep nurse preparing patients for surgery.

"Our surgical cases had come to a near stop," Rachel says about the first surge of the virus, "while at the same time I was hearing of the dire need for critical-care-trained nurses in New York."

Taylor says his wife came home from a shift and said her heart was leading her to New York City, which was, at the time, being hit the hardest by COVID-19. "We were compelled to join relief efforts and help bring hope to people whose lives were being wrecked by this virus," says Taylor. With the decision made, the young couple went into action. Taylor's initial idea was to sail Turning Points, their 2007 Beneteau Cyclades 50, but ruled it out after learning New York City had minimal long-term anchorages, and most marinas were either shut down or out of their price range.

Before he could book an Airbnb and drive north, Rachel had written to a local sailing group in New York on Facebook, simply asking if they had any suggestions. "The response was unbelievable!" Taylor says. "The boating community rallied, and within minutes we were contacted by someone at ONE°15 Brooklyn Marina who wanted to get involved with relief efforts and offered to host us. Their kindness toward us has been overwhelming."

Three days later, on April 10, they were underway with two friends as crew. Taylor plotted the course to New York Harbor from their home port in Hampton, Virginia, which came to 260 nautical miles on the head.

"With a limited weather window, we set out on Good Friday night at about 11:30," he says. "Kevin, a close family friend, and I took turns on watch while the rest of the crew kept us in hot chocolate and company. Thirty-five hours later, we rolled into New York Harbor. Arriving by boat has been a dream of mine since I was young."

Taylor had grown up sailing with his dad and sister and logged thousands of hours on little Sunfish, Hobie Cats, and on up to a 25-foot Catalina, before buying the Beneteau.

"Coming to the city and working as an ICU nurse again after a two-year sabbatical in critical care was quite a transition," says Rachel. "Especially working in this crisis setting where the hospital had converted dozens of rooms into intensive-care rooms. Working in these jury-rigged rooms with a slew of other traveling staff presents numerous challenges, but we overcame them together."

On top of that, the patients were "outrageously sick." She describes the experience as "quite sobering for me as a nurse caring for these patients, with no definitive cure or treatment to offer, and to witness such a large amount of death."

The challenge was great, but the contribution by outside health-care professionals, volunteering from around the country to provide relief to overworked and exhausted local nurses and doctors, played an invaluable part in finally helping the city "bend the curve" and weather the massive surge of critically ill patients.

Arriving [in New York Harbor] by boat has been a dream of mine since I was young.

After ending each of her night shifts, Rachel returned to the boat to unwind and rest. "We have been so blessed by the New York City sailing community," she says. "They have welcomed us with open arms and have gone above and beyond to ensure we're cared for. It's been a privilege to be part of this community and witness how this virus has sparked so much unity in so many areas."

Overall, Rachel says, she's appreciated everything about this experience, including the hard work, exhaustion, and dealing with so many difficult emotions — and she's loved being on the boat.

"Turning Points is accommodating and comfortable. We simplified our cooking a bit and have been very careful planning out grocery and laundry runs," she says. "Sleeping during the day aboard is an adventure, given the city waterway traffic. Turning Points frequently catches the wake of ferries and freighters, so I had to get used to a steady rocking and rolling. Now that helps lull me to sleep."

Meanwhile, Taylor worked remotely from onboard, did boat projects, and volunteered with a homeless shelter. By the time Rachel's contract with NYU Langone ended in June, virus hospitalizations in Brooklyn were coming back under control, and the virus began raging across other parts of the country. Eventually the Hartleys would sail back home, knowing they'd done their best to help those in need at this critical time in American history.