It's The Tales We Seek

For one angler, the act of fishing isn't a means to an end. It's about creating the chapters that write the stories of our lives. 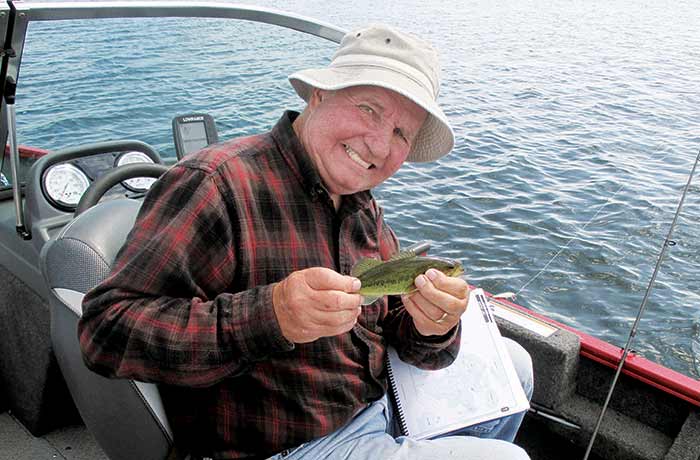 The author with a bass that looks ­really big!

An instant after my plug landed near the lily pads, the water exploded. A big bass had hit! As his body rose nearly completely out of the water, I realized that this bass was something special. My adrenalin level rose as I worked him toward the boat. Following years of picturing this moment in my dreams, I was about to land a trophy bass. After a couple of runs, the big fish was finally alongside the boat, then safely in my landing net. I let out a war whoop and admired my prized specimen.

Sounds like a typical story in an outdoors magazine, right? Well, in reality, this bass was around 4 pounds — nothing by national standards, but by far the biggest bass I'd ever caught. And this article is not for the professional fisherman; it's for the rest of us.

I'm not what I'd consider a big-time fisherman. (Nobody else would consider me in that category, either.) I feel lucky when I catch anything, and there are many times I don't. My tackle consists of a hodgepodge of old and mismatched gear. I've never figured out how to work an artificial night crawler across the bottom (if that's even where you are supposed to work them). That doesn't mean I don't enjoy fishing, and an essential part of enjoying fishing is having good memories. To me, that's what it's all about. How do the rest of us have good memories about our fishing experiences? One way is to rely on luck and catch some big fish. Once in a while even the worst of us stumbles into a good catch.

I don't want to depend on my luck, however, so I've developed a few simple rules to guarantee that I'll have joyful memories and great stories to tell. Let's see what these rules are and how they work.

Rule No. 1: Never measure your fish. Fish will continue to grow long after being caught, as long as you don't know their correct length and weight to begin with.

Remember that bass at the beginning of this article? I said it was a 4-pounder, but in reality I never did have it weighed. All I know is that it was BIG. Now that I think about it, that fish must have weighed more than 4 pounds, especially considering the way it fought. I'll bet it was closer to 5 pounds. Could've been 6.

Here's another example of how this rule works. Several years ago, I was at a meeting in the White Mountains of Arizona. During our lunch break a couple of us decided to take a quick shot at the trout in Sunrise Lake. After a few casts no more than 100 yards from the dock, I had a nice strike and caught a BIG rainbow. I wanted to show others attending the meeting this nice fish before I released it, but we had no container to keep it alive on the boat, so we rowed to shore and placed the trout under our landing net to keep it alive at the edge of the water. (See Rule No. 3 for additional information on the technique of being inadequately prepared.) We saw one of the guys a few minutes later and told him to check out the nice trout in the net. His approach was to lift the net out of the water to get a better look. Of course the trout immediately swam away.

I was not upset and immediately saw this as an opportunity to capitalize on Rule No. 1. That trout had grown by at least 25% by the time we got back to our meeting, and it had grown another 50% by the next day. In fact, it continues to grow. Pretty soon I'll be able to enter it in the Fishing Hall of Fame category for those that got away. 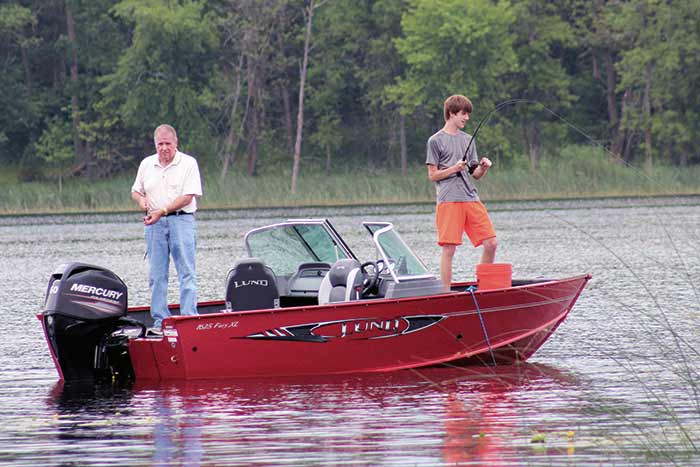 The author and his grandson enjoying a nice summer day on Nokay Lake in Minnesota.

Rule No. 2: Never check your tackle after it's been in the garage for a year. You get much better memories from the ones that get away than from the ones you catch.

Several years ago we planned a family vacation at Johnson Lake, north of Grand Rapids, Minnesota. I dreamed all winter long about the great fishing I was going to have. Finally the day of departure came. I gathered up my dusty tackle in the garage, scraped off the cobwebs, and threw it all in the trunk. As soon as we settled in our cabin, my son and I set out for the BIG ones. As I rigged up my pole, everything was going my way. My snap swivel from the previous year was still tied on, so I didn't need to waste time remembering how to tie the right knot. I put on my favorite plug and began casting.

Before long, I had a strike. A nice bass took the plug. As the fish broke the surface, my line decided to do the same — break that is. To be honest (all fisherman are, aren't they?) the fish wasn't really that big. However, I began to think about how I could apply Rule No. 1. Also, I was upset because that bass had my favorite plug. For the next half-hour or so, the bass kept jumping around the boat, shaking my favorite plug in front of me. Then we didn't see him anymore. But lo and behold! There was my plug floating a few yards away. We rowed over, picked it up, and I tied it back on — this time I cut off a little line where it was nicked and frayed. Now I ask you, would I have as good a story if I'd caught that bass? During the next few days I caught several nice fish, but the one I remember most is the one that got away.

Rule No. 3: Never be prepared to land the really BIG one. You'll probably blow it anyway, and if you've got all the right equipment, you won't have nearly as good an excuse (or story).

An excellent example of the application of this rule happened to my wife and me on another trip to Johnson Lake. We'd spent two days sitting in our cabin watching the rain fall. Finally, on departure day, the weather broke into beautiful sunshine. We had about four hours before we had to leave. I suggested we go for a boat ride. I threw a couple poles in the boat and we shoved off.

There's a nice weed bed in the lake noted for good crappie fishing. When we reached it we decided to wet a line. I began casting my favorite plug (yes, I still had it) to see if I could find a bass or two while my wife tossed a small jig out for the crappie. Now let me describe Judy's rig: She had one of those kids' Zebco outfits that comes complete with rod, reel, and line. At the time I think they cost $5. She was using the jig without a steel leader, and the line was what came with the outfit four years before.

That day was beautiful: a warm sun with no wind. We were enjoying the peace the setting gave us prior to returning to our home and jobs. Judy began to reel in, remarking that she had snagged some weeds. "Those aren't weeds," I said. "You have a small hammer handle pike on there."

And so it was. As Judy began lifting her little pike out of the water, a monster muskie came from under the boat and grabbed the pike from her hands. It was just the way you've heard about it before. That muskie couldn't have missed Judy's fingers by more than 6 inches. Judy had an understandable reaction: "Oh, my God," she exclaimed and jammed the pole into my hands.

The muskie stripped off about 10 feet of line, then just lay there. There was no fight; it was like I had a big rock on the end of the line. So I assessed the situation; we had no landing net, no gaff hook, no steel leader, for all practical purposes no hook at all on the end of the line, and a pole designed for bluegills, not muskies. This led me to a seemingly obvious conclusion. "There is no way we're going to catch this fish," I proclaimed.

I certainly wasn't about to give up after a vote of confidence like that. The nearest shoreline was about 300 yards away, so I decided we should row to shore and try to beach the fish. As Judy rowed the boat I dragged the muskie along like an anchor. Occasionally, he would ease the pressure a bit and I would reel him up. I could see him and he was BIG; bigger than my leg and at least 30 pounds (see Rule No. 1). When he got too close to the boat, he would pull some line back out and drop from sight. This muskie must have wondered at the peculiar behavior of his meal.

By the time we were halfway to shore, we'd attracted an audience on a nearby dock. One of the spectators shouted out to see if we were having motor problems. "I've got a muskie on," I responded, "and I need a landing net."

Now, this fellow turned out to be an excitable kind of guy. When he realized what was going on he yelled back "I've got one," jumped into his boat, and roared toward us at full speed. Wham! Into the side of our boat he came, nearly knocking us and himself into the water. "Here's the net," he offered. By this time the muskie decided his dinner wasn't worth all the bother and commotion. He released the pike and swam away, never to be seen again. I took the net from our helpful observer and calmly and professionally dipped the small pike out of the water. Our friend looked quite disappointed as he mumbled "That's not much of a muskie."

"He put up a great fight," I replied and thanked him for his help. He probably wonders to this day why someone would need a net for such a small fish. But that's how nicely Rule No. 3 works; not only did I get a great story, this stranger got one, too. Further, this 30 pounder, or perhaps 35 pounder (see Rule No. 1) muskie was still out there to give someone else a nice story to tell. And for any doubting Thomases, we took pictures of the little pike and the HUGE bite marks in its sides.

Let's face it. For most of us, if you add up all the costs of recreational fishing, it's obvious that it would be far cheaper to buy your fish at the supermarket than catch them. When we go fishing it's not for the filets; it's for the tales and the memories.

Conrad Fjetland retired in 1997 from the U.S Fish and Wildlife Service after a 32-year career in many sections of the country. After earning a law degree, he practiced law for a dozen years in Arizona and Texas. He and his wife of 52 years then retired again to a lake in Minnesota where he enjoyed fishing in his Lund Fury Sport boat. Recently, he and Judy moved back to the White Mountains of Arizona. He says there is a big trout out there waiting for him.