How Not To Read A Hurricane Map

Maps shown in the media are often misunderstood. Be careful: Incorrect interpretation could leave you and your boat unprepared. 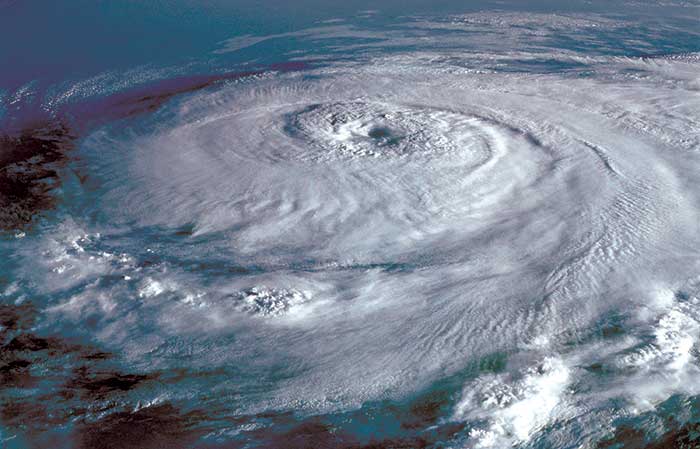 When Hurricane Irma swept across Florida in September 2017, the damage was catastrophic. It was the most intense hurricane to strike the continental United States since Katrina in 2005. It was also deadly. Before finally dissipating over Missouri, Irma left 92 Americans dead. In an effort to help inform BoatUS Magazine readers about what's coming when a hurricane is forecast, let's zero in on how to read a hurricane-prediction map.

When a hurricane is forecast, the National Hurricane Center (NHC), part of NOAA, produces a map of the likely track of the hurricane. Some boaters look at the map and wrongly assume that the widening cone shows the hurricane getting larger over time. Others think that the circles drawn on the map represent areas that will be affected by the hurricane, and that everything outside the circles are safe — also very wrong. These misconceptions leave many boaters either totally unprepared or poorly prepared for the storm, vulnerable to serious damage or total loss of their boats as a consequence.

What Do Those Circles Mean?

On any good hurricane tracking forecast map, there are dots representing, day by day, how far the storm is expected to travel and where the CENTER of the storm may be. But hurricanes are very unpredictable, so a circle is drawn around each dot on the projected track. The circle is NOT, as is often assumed, the extent of the storm. And the circle is NOT showing the outer edges of the storm. It shows only where the possible CENTER of the storm may end up, which is somewhere within that circle. If the eye of the storm ends up on the edge of that circle, the ramifications for the locations all around it can be dire, including locations far outside the circle.

The predicted circles are joined with lines on each side. These form what is often called the "cone of uncertainty." The eventual track of the storm may be anywhere inside that cone, but even this is not certain. It's important to note that the cone of uncertainty is usually greater as you extend out in time, because it's easier to predict the course of the storm tomorrow but more difficult to know where it'll be next week.

NOAA's National Hurricane Center warns that the final track of any given storm plays out exactly as forecast only 70% of the time. This means that one in three times the eventual track is outside that cone of uncertainty. Irma, for instance, was predicted by tracking models to travel up the center of Florida. In actuality, the center of the storm was farther west and followed a line almost parallel with the west coast of Florida before heading up across Georgia and Tennessee, finally dying in Missouri.

In addition to wind strength, information on barometric pressure may be given. The lower the pressure, the worse the storm. Also, a very low barometric pressure may mean a higher rise of the ocean. A trend up in barometric pressure is good news, but don't let your guard down; all of this often changes. This is why you can't just take a look at the map on Monday and forget about it the rest of the week. Not all maps show complete data; some are produced to show only the more basic data. 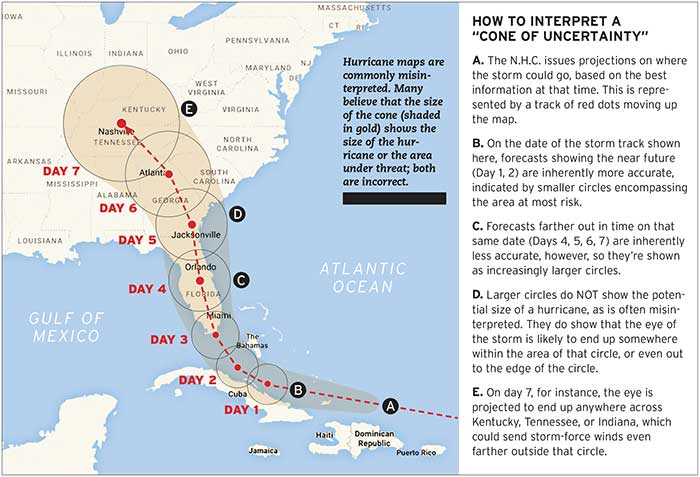 Many boat owners wait until it's too late to take action, erroneously thinking that if they're outside the cone they'll be safe.

"If there's one thing boaters need to learn, it's that hurricanes can be unpredictable," says Mike McCook of the BoatUS Marine Insurance Catastrophe Team. "In the case of Sandy in 2012, many of the forecasts showed the storm heading out into the Atlantic. Instead, the storm tracked west and made landfall in New Jersey, catching boat owners off guard with devastating results."

High winds, rain, and storm surge are just a few of the common phenomena that may affect boaters hundreds of miles from the actual center of a hurricane. Learning to read these maps accurately will give boaters a better idea when to take decisive action to protect their boats and property earlier, and with less panic, when a storm is forecast.