Here's what we're learning about these magnificent creatures and where boaters can spot them along their migration routes. 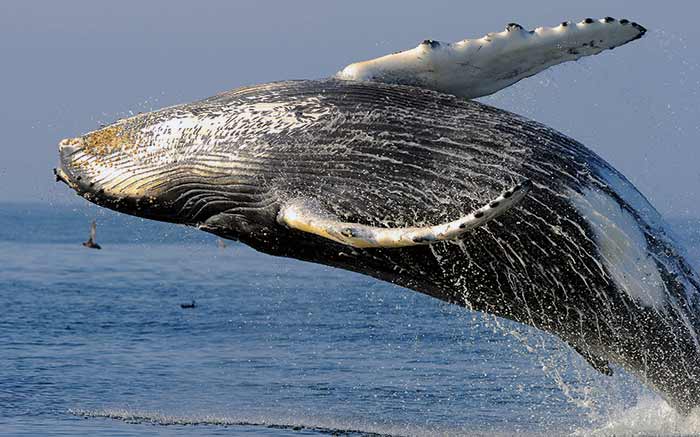 A humpback whale offers an eye-catching breach. Scientists are not sure of the reason they do this acrobatic maneuver, though it may be a form of communication. (Photo: Ari Friedlaender, NOAA Fisheries Ppermit 14245)

At the completion of her 1,500-mile journey, a humpback whale waits patiently for the arrival of her calf in the warm, shallow water breeding grounds of the Caribbean. Of course, "wait" is likely a misnomer, as her sense of time and space is a world apart from our own. The medium she moves through, the distances she travels, and the annual rhythms to which her life is attuned are alien to us. Yet, thanks to new technology, we're now able to see into her inner and outer world, in a way never before possible, and answer questions that have long mystified researchers.

It's believed that whales began migrating 5 million years ago when the climate changed and food sources became more dispersed. A 2019 study used barnacle fossils to decode ancient whale migratory routes. The barnacles, which had hitched rides on ancient grays and humpbacks, acted like Pleistocene GPS trackers. By examining their chemical composition, researchers showed that some humpback whale subpopulations have been returning to the same breeding ground off the coast of Panama for 270,000 years.

How Do They Do It?

There have been a few theories as to how whales navigate such vast distances across the globe. One popular theory has been that blue whales are simply following their food source. But a new study suggests that they might actually be using a form of memory to navigate.

The study measured chlorophyll, a green pigment present in plankton, which is then eaten by krill, the primary food source of blue whales. Chlorophyll concentrations were compared with the movements of 60 satellite-tagged blue whales in the Eastern North Pacific. Scientists were surprised to see that the whales were not following their prey in real time. Instead their movements were correlated with 10-year historical averages of chlorophyll, leading scientists to infer that blue whales might be using a form of memory to guide their movements. 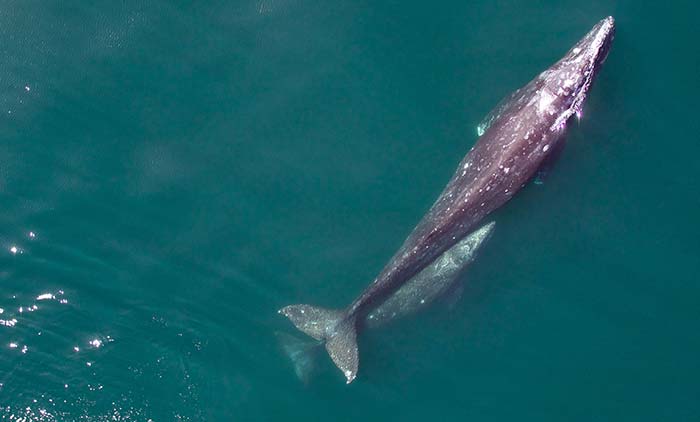 A gray whale and her calf swim off the ­California coast. (Photo: NOAA)

You'd think a 40-ton animal would be a fairly easy thing to keep tabs on, but the whales' long ranges and remote habitats make them particularly challenging to study. Here are some of the new technologies that are helping us listen in on their lives.

Why Do They Do It?

More than a hundred years ago, whalers noticed that many whales migrate to the tropics to bear their calves, but scientists still don't agree on the reason for this. Nutrient-dense, cold water supports an abundance of feeding opportunities, whereas, in warm-water calving grounds, whales must fast as food is scarce. So why bother migrating at all?

Scientists have proposed a few theories. Some say whales migrate south because warm waters are important for conception. Others say it's to ease the shedding of barnacles or molting of skin. Another possibility is the need to protect calves from the attacks of cool-water-dwelling killer whales.

On the West Coast, migratory routes and highly productive feeding grounds are routinely transited by container ships bound for and departing from busy ports like Los Angeles, San Diego, San Francisco, and Seattle, resulting in numerous ship strikes which cause stress, injury, and death to whales. A 2017 study, published in the journal Plos One, found that blue whale mortality was 7.8 times the U.S.-recommended human-caused mortality limit, suggesting that vessel strikes may be seriously limiting population growth and recovery. 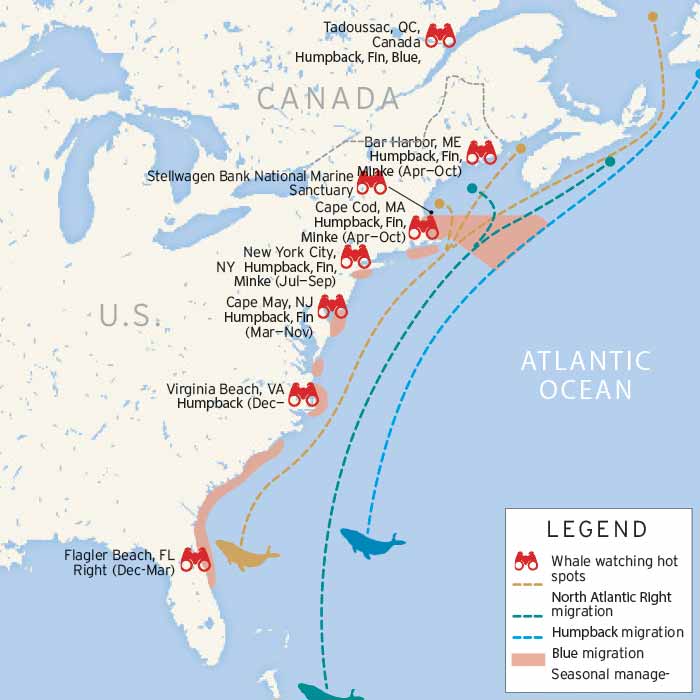 On the East Coast, the threat of entanglement is especially dire for the North Atlantic right whale, which has been listed as critically endangered by the International Union for Conservation of Nature. With a population of just over 400, North Atlantic right whales are one of the rarest marine mammals on earth. Studies have found that 85% have been entangled in fishing gear at least once, 60% more than once. Not only is entanglement life-threatening, it causes injuries and stress, which biologists believe reduces calving rates.

In 2016, a 5,000-square-mile area off the New England coast, the Northeast Canyons and Seamounts National Monument, was closed to fishing by the Obama administration, creating the Atlantic Ocean's only fully protected marine sanctuary. The purpose was to enable recovery from overfishing and aid in the protection of whales and marine life. Heavy fishing gear used on offshore lobster and crab boats in this area injure and kill endangered right whales and other whale species. On June 5, 2020, President Trump reopened commercial fishing in the sanctuary.

We need eyes on the water ... thousands of citizen scientists in their boats ... reporting what they’re seeing is very powerful.

Changing climate has compounded these issues. 2015–2016 saw a record number of entanglements on the West Coast when an unprecedented marine heat wave compressed humpback feeding into a narrow band of water near the coast. When Dungeness crabbing opened, commercial fishing boats focused on the same small area, leading to a record of 53 whale entanglements in 2015 and 55 in 2016.

Could An App Save The Whales?

You can directly contribute to better
understanding of whale movement and
migration by reporting sightings
using the Whale Alert app.

Strikes and entanglement can be reduced by better understanding where whales are at any given time. Wiley has worked closely on an app that does just that. Whale Alert is a free app that allows biologists, whale-watching vessels, U.S. Coast Guard, commercial ships, recreational boaters, and the general public to share real-time whale sightings in the United States and Canada.

The app shows a map that displays reported sightings and conservation areas. Using GPS positioning, it alerts mariners when they're entering whale "safety zones" and displays the appropriate "do's and don'ts," including speed limits, for that area.

Recreational boaters can even play a role in establishing new dynamic management areas (DMAs). "Say a recreational boater comes across five or six right whales and reports it over Whale Alert," says Wiley. "That report goes right to the National Oceanic and Atmospheric Administration (NOAA), and they can make a dynamic management area around that area within hours." The DMA is displayed on the Whale Alert app with voluntary speed restrictions.

The app also allows boaters to report whales in distress and connects them with trained first responders who can help. (See "Become A Citizen Scientist" below to learn how you can use Whale Alert.) Even with 40,000 downloads, the app's effectiveness is contingent on the number of reports submitted to the platform.

"We need eyes on the water," Wiley says. "With climate change, the historic distribution patterns are changing. We need to know where the whales are, and there's no better way of finding out than by enlisting the help of boaters. To have thousands of citizen scientists in their boats looking and reporting what they're seeing is very powerful."

Hope On The Horizon

New technology, policy, and citizen science can have a dramatic reduction of the number of whale strikes. For example, Wiley's research led to a relocation of shipping lanes in the Stellwagen Bank National Marine Sanctuary. As a result, the estimated risk of ships striking whales while using shipping lanes in the sanctuary has been reduced by 81%. 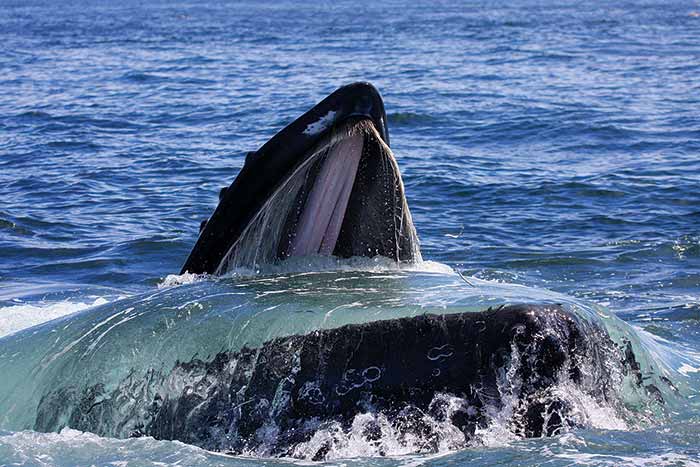 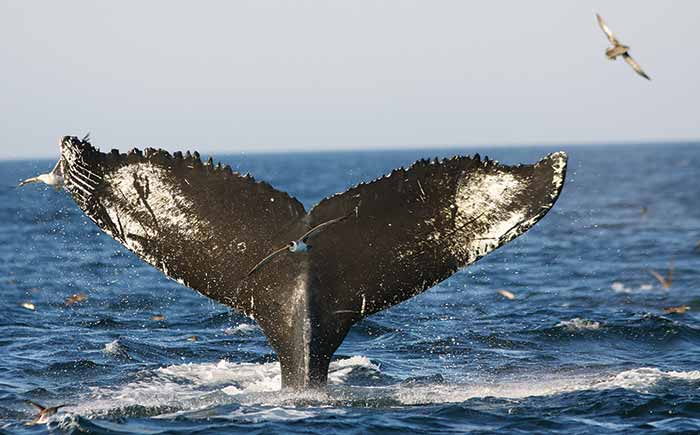 Fins up signals that a whale is going for a deep dive. (Photo: Elliott hazen/NOAA, NOAA Fisheries permit 14245) 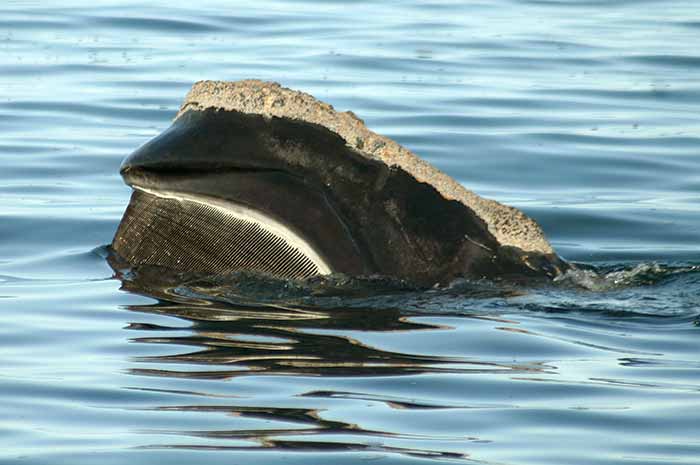 "It used to be that strike deaths were the number-one [cause of mortality in North Atlantic right whale populations]," says Wiley. "Now, because of all the action that NOAA has taken, ship strike deaths are way down, and entanglements are the main problem."

Wiley recently worked on a project that used video tags to observe humpback nursing behavior underwater in the Gulf of Maine. The videos offer an extraordinary peek into the intimate world between mother and calf. In a video shot from the calf's perspective, a humpback whale slows her movement through the water, aligning herself alongside her calf. Her fluke strokes decrease and she glides in stillness as the calf nurses. Mother and calf are momentarily connected, suspended in space and time, until the calf pulls away and a puff of white milk clouds the water.

Did You Know: Tail flukes have distinct patterns that allow researchers to track and identify individual whales.

This moment caught on film represents a mere drop in the oceans of data that Wiley and his team have collected, but it's emblematic of technology's potential to protect cetaceans beyond recording facts and figures. Technology is opening a portal into their blue world. A world that, on closer inspection, feels profoundly familiar.

How To Be 'Whale Aware' On The Water

Should you be worried about hitting a whale in your recreational boat? Wiley said that recreational vessel strikes do happen. In fact, large pleasure boats were the likely cause of recent "serious injury/mortality events" involving two of the total 10 North Atlantic right whale calves born in 2020. But he's also concerned about the risk to human life.

"The people inside a recreational vessel can get severely injured if they hit a whale. If you're going fast and you hit a whale, you're going to come flying out of that boat. The whales are so big, they're not really easy to scare. They have this personal space around them that isn't very big. They don't start to take evasive action unless something is pretty close. By the time they react, the boat has already closed the space."

To reduce the chance of a collision: