Keeping the water on the outside of the boat is essential. Here's how an inboard-powered boat gets a shaft from the inside to the outside. 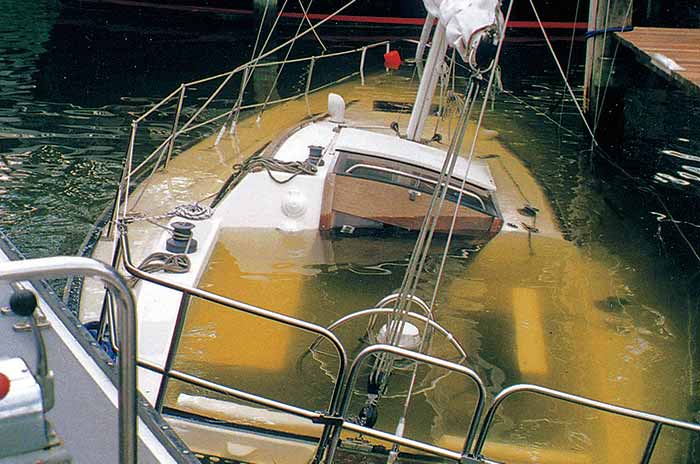 If the stuffing box fails, water can fill the boat so fast that the bilge pump can't keep up, leading to sinking.

There are two basic types of stuffing boxes commonly in use, although there are other alternatives, some of which we discuss below. Perhaps the most common type consists of a stuffing box body attached to a special heavy-duty hose (attached to the shaft gland), a compression sleeve into which the stuffing is packed and which screws over the body, and a locking nut that locks the compression sleeve into place.

The second basic type, like that on my boat and to which I'll primarily refer in this article, consists of the body that is attached to the hose and into which the packing is stuffed, and a compression sleeve that compresses the stuffing by tightening the nuts on the bolts protruding from the body.

A PSS shaft seal before fitting. The carbon ring is placed under tension by the rubber bellows against the stainless-steel ring, which is clamped to the shaft. Note the water injection nipple at the top of the carbon ring.

Under the compression sleeve are three or more rounds of packing material. Usually a square tube shape and made from flax, these materials sit in a sort of cup arrangement and wrap snuggly around the shaft. As the packing compression sleeve is tightened, the flax is slightly squeezed outward toward the shaft, lightly gripping the shaft and preventing water from entering the boat.

When properly adjusted, stuffing boxes are designed to "leak" slightly at two to three drops per minute while the engine is running and the shaft is turning. There should be no dripping when the boat is at rest and the shaft is not spinning.

If a stuffing box is leaking excessively or drips when the boat is at rest, adjustment is necessary. To do this, loosen the locknut (depending on type, this may be the nut threaded around the body or lock washers on the bolts), tighten the adjustment sleeve a little, then retighten the locknut. The stuffing box must never be overtightened as it's designed to leak a little. The water acts as a lubricant and prevents the packing from overheating while the shaft is turning. After you make any adjustments, monitor the stuffing box to ensure all is well; at no point should a packing box get too hot to touch. If you can't leave your hand on the fitting after the engine has run, that's an indication that it's been overtightened and you need to loosen the compression sleeve just a little.

Repacking May Be Necessary

Over time the packing will wear, and no amount of adjustment will prevent more water than desired from entering the boat. When this happens, it's time to change the packing material, which can be purchased from retailers such as Defender or West Marine.

Packing comes in different sizes depending on the size of the shaft; the larger the shaft, the bigger the packing required. As a general rule, shafts up to about 11/2 inches require quarter-inch packing. Any larger, and you'll probably be looking at 3/8 inch.

While packing material is traditionally made of flax, recently it's being made out of other materials. Perhaps the most popular incorporates Teflon, which increases wear resistance while reducing friction on the shaft.

Although it's possible to change the packing with the boat in the water, we recommend against that. Do it with the boat on the hard, especially if this is your first time.

Stuffing box failure when a boat is left unattended at the dock will almost always result in a sinking. The inrush of water is so severe that no bilge pump can keep up with the flow. Bad as it may be with the boat tied to the dock, when the boat is offshore and possibly miles from a safe haven, it can be devastating.

While the exact course of action will be determined to some extent by the boat and type of shaft stuffing box or seal you have, the first thing you'll want to do is stop or at least slow the rate of water coming into the boat. If the boat is under power, shut down the engine. This may sometimes be enough to stop, or reduce, water flow. Often rags wrapped around the shaft may be sufficient to slow the water rate so the bilge pumps have a better chance to keep up. 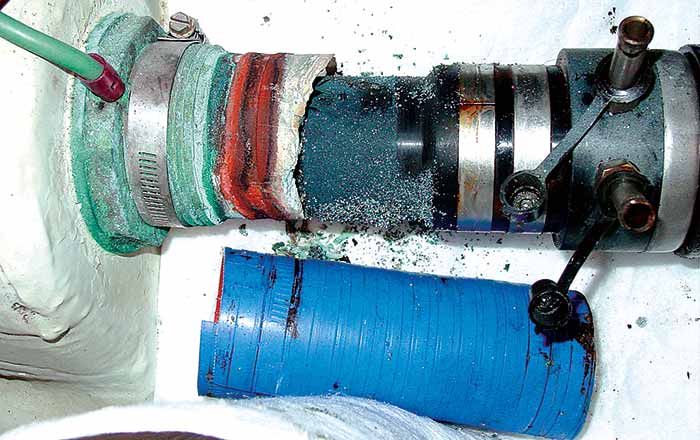 Failures are not always with the shaft seal or stuffing box itself. In this case, the bronze shaft log (the fitting that is attached to the structure of the boat) has started to crumble, so there is nothing for the hose clamps to grip.

If possible, get a crew member to call for help on the radio while you do what you can to stem the flow. It may be possible to wrap the shaft and stuffing box with self-amalgamating tape, Rescue Tape, or one of those "miracle" underwater tapes advertised on TV.

Some boats have V-drives where the stuffing box is located literally under the engine, making temporary repairs almost impossible.

Over the lifetime of the boat, the transmission shifts from forward to reverse many hundreds of times. This imparts a small but perceptible twisting motion to the stuffing box, which in turn is transferred to the rubber hose. If the packing were to run dry by being overtightened, this twisting motion increases significantly, stressing the hose. Often a short length of exhaust hose may be used, but this is incorrect. Hose specially designed to connect the stuffing box to the shaft log will be five-ply, a heavier duty than exhaust hose. This is not a place to save a few bucks. The same goes for hose clamps, which should be nonperforated stainless steel. (To learn more about hose clamps, see "All About Hose Clamps")

Another potential source of failure is where the water is injected into the stuffing box or dripless seal. (Some stuffing boxes with packing will not have water injection.) The injected water serves two purposes: It keeps the rotating shaft cool and provides lubrication. However, should the injector hose fail in some way, either by coming detached from the nipple on the stuffing box or by developing a leak through a split, two outcomes are possible. Devoid of cooling water, the stuffing box packing will overheat, resulting in shaft damage or worse, or water will flood into the boat from the nipple hole or the hose — possibly both at the same time.

Also, if the stuffing box has water injection for cooling and lubrication, it may be possible for the sleeve that goes into the hose to seize to the shaft due to overheating and twist the hose until it breaches. Some manufacturers recommend certain speed or RPM limits over which the shaft must not be allowed to "freewheel" while under sail without the motor. Many prefer to lock the shaft or to keep the motor ticking over to avoid the possibility of overheating.

Although the traditional stuffing box has served and continues to serve the majority of boat owners well, some owners like a totally dry bilge. Dripless stuffing boxes can allow just that. There are two main types. For example, lip seals like the SureSeal from Tides Marine, feature a seal that has a flexible lip riding on the shaft to keep the water from entering the boat. Another is commonly called a face seal, where a special carbon ring is pressed under tension against a stainless-steel ring clamped to the shaft. Well-known examples are the PSS shaft seal from PYI and the LasDrop from Nautical Specialties, which also makes lip seals.

When correctly installed, both types of seals should last for many years and should allow no water into the boat. And just in case you were wondering if dripless seals were reliable, the LasDrop seals are made for commercial applications in shaft diameters up to 8 inches! All these types of seals rely on seawater for cooling and, in some cases, lubrication. Without it, the seal will have a very short life and fail. Many engines have a take-off port on the wet exhaust for just such a connection. Often, where a traditional stuffing box is replaced with a dripless type, the hose can be transferred from the old to the new.

The maintenance of dripless seals is pretty straightforward. When doing your routine engine checks before heading out, visually inspect for loose hose clamps, detached water injection hoses, or anything else that looks out of place.

Sometimes face seals can leak, frequently due to a tiny piece of dirt trapped between the carbon ring and rotating stainless shaft ring. Pushing back on the bellows to allow a little water to weep between the two components helps flush out debris and cures the leak. Different manufacturers will have specific instructions on maintenance and installation, which should be followed to the letter.

How To Repack A Stuffing Box 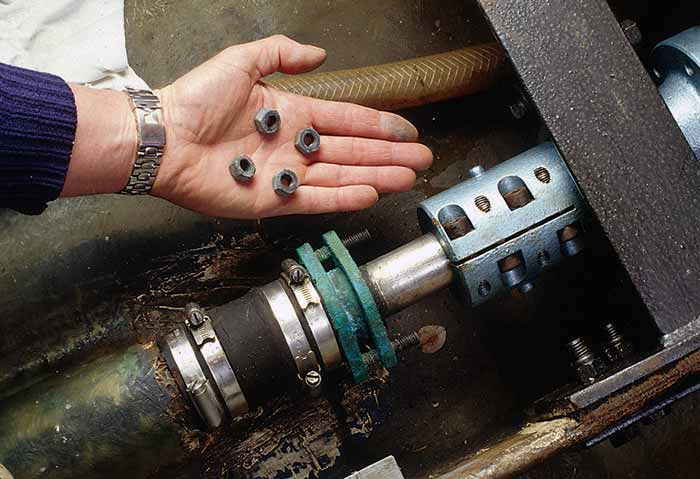 1. Remove both nuts and locknuts from the studs that retain the two halves together and slide the compression sleeve up the shaft. 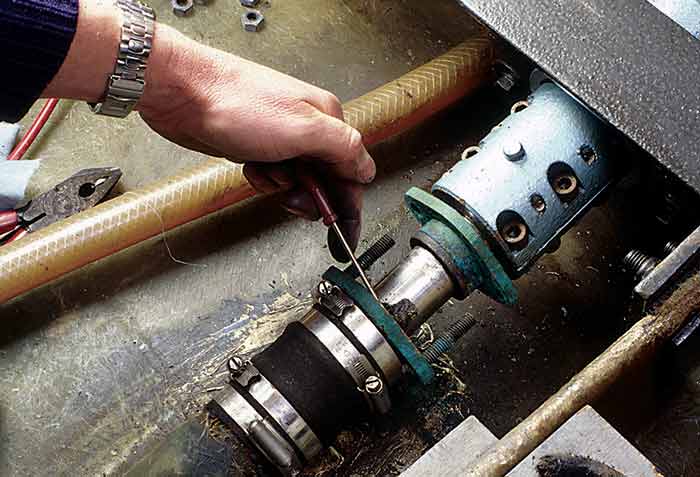 2. Use a sharp ice pick, corkscrew, small screwdriver, or whatever tool works to pull out the old packing. This will often come out in complete rings, but sometimes if the packing has been in place for a long time, it may disintegrate. 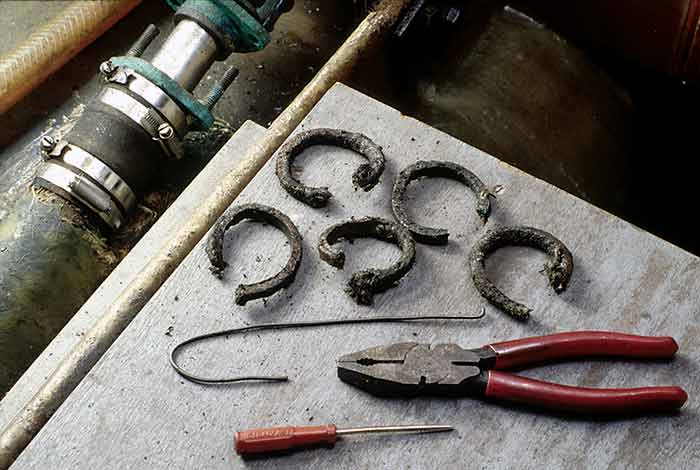 3. Here all the packing has been removed, and as you can see, there are five rings in this installation. Yours may have fewer — three is common on smaller shafts. 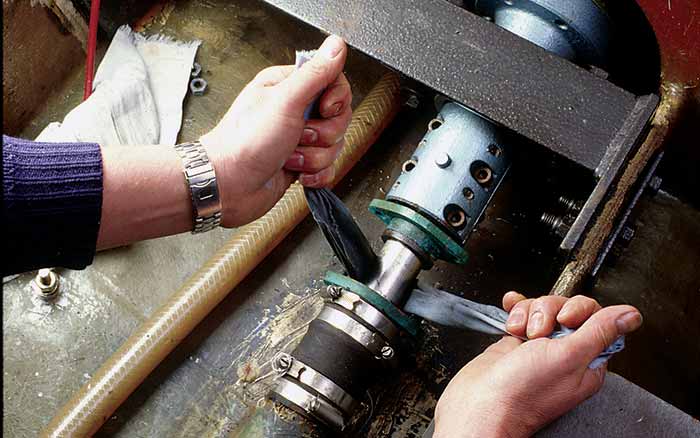 4. Carefully inspect the shaft for damage and scoring, and clean thoroughly with a rag.

5. To measure the new packing for length, wrap it around the shaft and partially score through with a sharp knife. Do not cut all the way through, or you could damage the shaft. I like to cut the ends at 45 degrees and not straight across, as shown here, as I feel it makes a better seal when pushed into the packing nut. 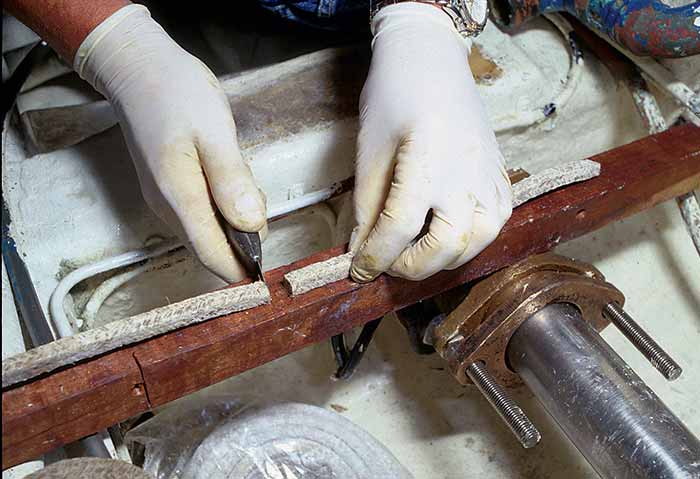 6. Lay the packing on a suitable block of wood and cut it all the way so that you have individual pieces. 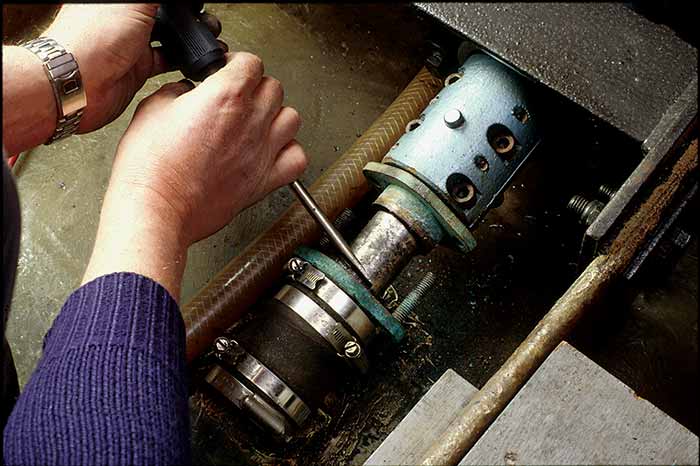 7. Push the new sections of packing into the packing gland. Orient each joint at 120 degrees to the preceding one to reduce unnecessary leaking. 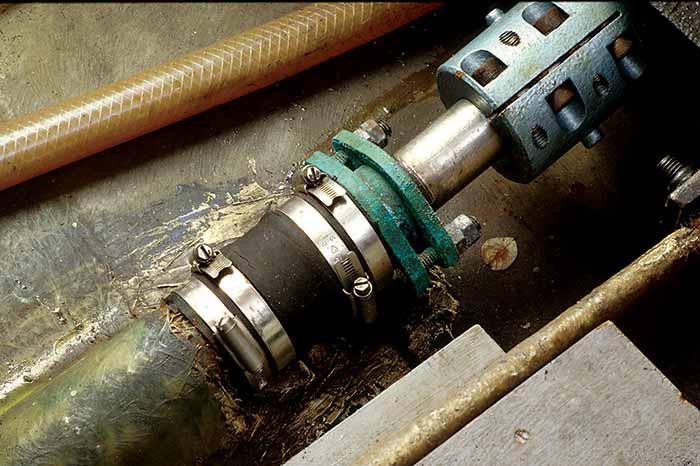 8. Reassemble the components and tighten, but don't overdo it. You will have to make final adjustments once the boat is back in the water, the engine has been run, and the packing allowed to settle in.