Illegally operated charter boat operations are more common than you think. Here's an inside look at a Coast Guard sting operation. 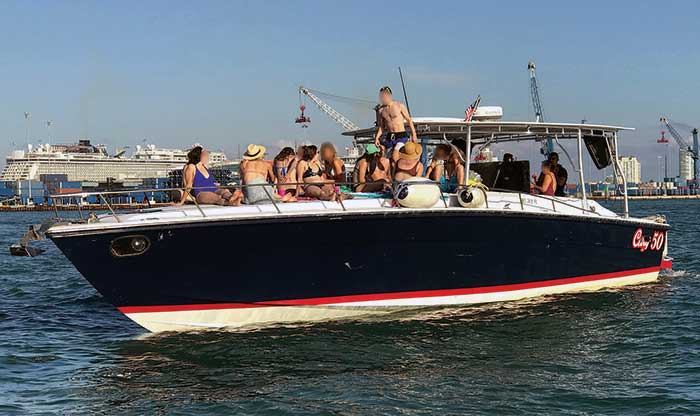 Coast Guard Station Miami Beach crewmembers board the 50-foot pleasure boat Natalie on the Miami River in December 2019. The cruise was terminated after it was established that it was an illegal charter operation. (Photo: Ayisha Loya/Coast Guard)

On March 31, 2019, when Dallas Ladd, 38, welcomed two passengers aboard his 45-foot motoryacht Sea You Twerk, he didn't know they weren't his usual customers — partygoers looking to let their hair down. The passengers were undercover Coast Guard special agents running a sting operation to investigate Ladd for operating an illegal charter.

In February, according to the Miami Herald, the Coast Guard had stopped Sea You Twerk and found multiple violations, including not having a valid Certificate of Inspection and not having a credentialed mariner captaining the boat. A month later, Ladd was issued an order by the captain of the port to cease operation. But he didn't.

From 2016 to 2019, the Coast Guard intervened in roughly 250 illegal small passenger vessel and charter operations across the country, adding up to nearly a half-million dollars in assessed civil penalties. Florida is home to the most infractions, but Coast Guard crackdowns have taken place in chartering hotspots coast to coast, including California, Illinois, and Virginia.

The issue of illegal charters is not one the Coast Guard takes lightly because at issue is passenger safety. "It's important that charter vessels go through an inspection or hold some type of documentation verifying that they're safe to carry passengers," says Lt. Cmdr. Lisa Hartley, of the Coast Guard's 7th District, which stretches from Charleston, South Carolina, to Key West, to Savannah, Georgia — and includes the U.S. Virgin Islands and Puerto Rico.

Hartley has seen three deaths in her district related to illegal charters in the last few years. "Easter 2018 there was a fatal accident on board Miami Vice, an illegal charter, where a passenger was fatally struck by a propeller," Hartley says. The unqualified captain was unaware that a passenger was in the water when he engaged the props. "In Tampa, Jaguar was another case that resulted in two deaths," a Colorado State University student and a charter employee who were swept out by a rip current into the Gulf of Mexico.

In June, the Coast Guard terminated the voyage of the 42-foot power cruiser Momentum II, with 31 people aboard, in the vicinity of Miami Marine Stadium. The skipper was issued for six violations, including failure to have a valid Certificate of Inspection, not have a credentialed skipper in control, and failure to have sufficient personal flotation devices.

Thinking you'd like to rent a boat? The Coast Guard advises you to ask the captain for:

"Most customers take for granted that everything is being regulated and that they're safe because someone has oversight," says Jesus Porrata, lead marine investigator at Coast Guard Sector Miami. "When you hop on a bus or a plane or a train, you don't ask the captain [for credentials], you assume that everything is in place. When it comes to boating you can't make those assumptions because a lot of people are using their vessels in an illegal fashion. They're putting passengers at risk by not having the proper skill set, not keeping the vessels in a state that's seaworthy, not having the proper life-saving appliances aboard."

In some cases, boat owners may be unaware they're breaking the law. According to Porrata, "Most individuals deem themselves properly trained, either because they've owned the vessel for a long time or because they hold credentials in other countries, but not necessarily in the U.S. Sometimes you have people who have some type of credentialing in the U.S., but may be exceeding those credentials."

Boat owners and operators risk maximum civil penalties of $39,000. However, if the vessel is in violation of a cease and desist order, civil penalties are $94,000. An individual may also face criminal fines of $250,000 and six years in prison.

Could You Be Unwittingly Operating An Illegal Charter?

You need a Coast Guard credential if you carry even one passenger for hire on your vessel. However, the difference between operating as a recreational vessel and operating as a passenger vessel can be quite subtle.

"Passenger for hire" is defined as a passenger for whom consideration is contributed as a mandatory condition of the charter. "Consideration" means an economic benefit and includes payment of money or donation of fuel, food, beverage, or supplies. A passenger may volunteer to share costs, but if the contribution is a requirement (i.e., the charter won't happen without it), the vessel is operating as a passenger vessel and requires a Coast Guard credentialed operator.

The ease of online booking has significantly contributed to the illegal charter problem. "We can book anything on the internet these days," says Hartley. "That's why we always stress ‘buyers beware.' It's important to check the captain's credentials and make sure they're valid."

In addition to online marketplaces like Craigslist and Facebook, boating-specific peer-to-peer (P2P) sites (think Airbnb for boats) allow owners to rent out their boats. While these platforms offer a great way to offset the costs of boat ownership, boat owners using these platforms can easily run afoul of the law if they're not properly equipped and credentialed. Many P2P platforms do not verify captain credentials. In fact, in an article published in the Chicago Tribune, Lt. Kate Woods, chief of the Coast Guard Marine Safety Unit's Chicago inspection division, estimated that in the summer of 2017, 90% of the boats offered for rent on one P2P platform did not comply with federal rules.

In addition to enforcement, the Coast Guard is tackling the illegal charter problem by reaching out to both charter customers and operators to educate on the differences between legitimate and illegal charters. "We invite our local marine operators, vessel owners, and customers to workshops where they learn the regulations and proper operating requirements," says Porrata.

P2P company Boatsetter also takes the issue seriously and verifies captain credentials against a database of Coast Guard credentialed merchant mariners. "We are the only platform that has an automated verification process for Coast Guard licenses," says Boatsetter chief operating officer Chris Fox. "In order to be paid as a captain on our site, you have to have your captain's credentials."

Far from being a naïve boat operator, Ladd blatantly advertised illegal charters aboard Sea You Twerk on social media, posting videos and photos of bikini-clad partygoers dancing on deck. Leading up to the sting operation, Coast Guard investigators had boarded Sea You Twerk on several occasions. Each time, Ladd insisted that he was just out partying with friends — he hadn't been paid to take them out. 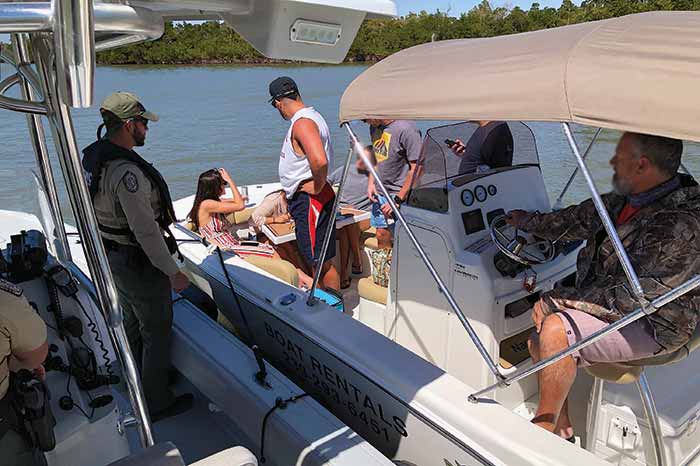 Two Coast Guard special agents, posing as customers, called Ladd to book a charter. They paid for the ride, and once aboard they recorded Ladd telling passengers to lie and say they were friends if Sea You Twerk was boarded by the Coast Guard. According to an investigator, Ladd said it was OK to do illegal drugs on the vessel.

Ladd was issued a COTP (captain of the port) Order on March 13, 2019, and weeks later was arrested at Bentley Bay Marina before embarking on another illegal charter. He pled guilty to violating a COTP Order and was sentenced to 30 days in prison and prohibited from owning or going aboard any boats while on probation for three years.

Drugs, special agents, and sting operations may sound like the stuff of a television or book crime series, but according to Porrata, there was "nothing special about this case."

"It's what normally happens here," he said. "You take a Sea You Twerk out of circulation and another vessel will pop up tomorrow." However, "Mr. Dallas Ladd was the first individual to be incarcerated for a COTP Order violation, so that's Coast Guard history in itself. It will hopefully send the message that we're taking this matter seriously."

"We also have a limited charter endorsement that allows for larger boats to operate as a charter with a crew endorsement," Pellerin adds. "An owner would need to contact our underwriting department for a review. If approved, we'll add this endorsement for no more than 30 days of charter per year." Cost is 5% to 10% of the annual premium, depending on the number of days requested to charter; crew coverage is additional.

Make sure you're covered if you want to charter your boat, and it's equally important for your guests to ask for proof that your policy and endorsements are in effect. Then everyone has peace of mind and can enjoy the experience.