Where do fiberglass vessels go when they’re past their useful lives? Until recently, the landfill. An innovative recycling business could change all that. 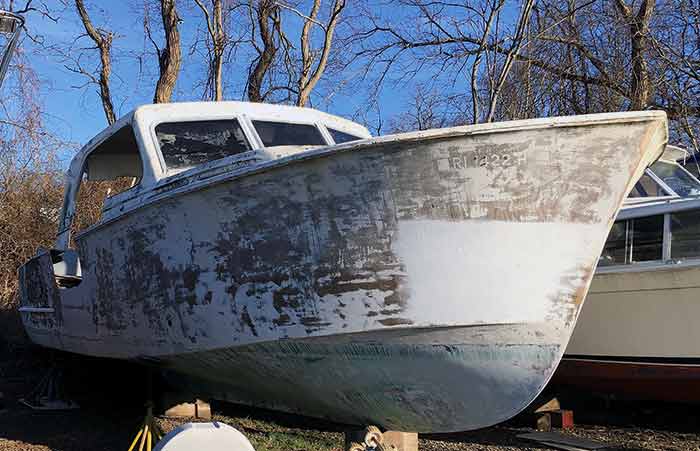 "Dead" fiberglass boats are finding new purpose — as a fuel source for the cement industry.

When a southwest Florida law enforcement officer determines a boat is derelict or abandoned, that boat joins the ever-growing list on Justin McBride's desk. Executive director of Florida's West Coast Inland Navigation District (WCIND), McBride checks his list of companies precertified to remove the derelict vessel, and a bid is placed. If the vessel is fiberglass, it's hauled, towed, scrapped of valuable parts, and — with no other options — dumped in a landfill.

The cross-linked polyester and fiberglass composites of the fiberglass hull, ideal for strength and durability for a lifetime on the water, are not biodegradable and will sit in the landfill for centuries. "We've looked into recycling," McBride says, but the local recycling facilities aren't interested. It's cost prohibitive.

American industry is also looking for a solution. Large marinas need to get rid of multiple dead boats; manufacturers are trying to move toward zero-waste products and closing resource cycles. The car and airline industries are working toward fiberglass recycle during the design stage. Even individuals with old hulls on their property face challenges; depending on size and situation, boat removal and disposal can cost upward of $10,000.

In 2018, there were 951,000 boats registered with Florida's Department of Highway Safety and Motor Vehicles, an estimated 12 million documented boats across the U.S., and 280,000 new powerboats sold nationwide. National Marine Manufacturers Association studies report an increase in sales this year. As new boats are added to our national fleet, and limited landfill space for "end-of-life" fiberglass boats shrinks toward critical mass, the question becomes: What will we do with all of these dead boats and industrial fiberglass waste?

This is a question University of Rhode Island Sea Grant director Dennis Nixon has been asking for years. As head of Rhode Island Sea Grant, Nixon heard one wish repeated over and over during his discussions with boatyard owners, marina managers, and boatbuilders. "They kept telling me, 'We've got to figure out something to do with these old fiberglass hulls,'" Nixon says, "other than smashing them up and taking them to the landfill. It's embarrassing." Rhode Island has only 12 years before its landfills are topped.

URI graduate research student, and now head of the program, Evan Ridley took up the baton on the fiberglass dilemma and in January 2018 launched the Rhode Island Fiberglass Vessel Recycling (RIFVR) Pilot Project. Sea Grant, along with several public and private partners, created RIFVR to research options and solutions to Rhode Island's derelict vessel and end-of-life fiberglass boat disposal problem. Ridley, project manager, tightened the project's scope to exploring the use of dead fiberglass boat hulls as a fuel source for the cement industry.

Ridley modeled his project on the German wind industry, where used giant turbine blades were shredded and burned in cement kilns as an alternative to burning fossil fuels. Germany's viable fiberglass recycling business, Ridley says, is the goal of the Rhode Island-based program. RIFVR's "product" (fiberglass hulls) was tested by a cement factory in South Carolina and deem­ed to be a viable fuel source for the industry. By the summer of 2019, Ridley had developed a multipart fiberglass hull-recycle model:

It Takes A Village

"From a regulatory standpoint, the Rhode Island Resource Recovery Corporation partnered with the RIFVR program and offered advice on how to work within environmental standards," Ridley says. State government helped Ridley understand guidelines and legislative policy.

The cement industry, by taking on a role and accepting the product, helped ignite the project and give it viability, Ridley says. National organizations such as the Association of Marina Industries helped the project get traction and notice, and helped determine how large the dead-boat problem is. Funding from multiple sources, including the Rhode Island Marine Trades Foundation, Rhode Island Sea Grant, 11th Hour Racing, and the BoatUS Foundation (BoatUS.org/Grants), in the form of grants and in-kind contributions, was critical in getting the project off the ground.

Private, state, local, and federal groups, businesses, and industries partnering together is the lifeline of the model, Ridley says. "BoatUS is widely recognized by a large boat-owning population. To have BoatUS take part in what we're doing elevates the platform."

Landfills In The Sunny States

Florida and California, two top boating states with millions of registered boats between them, have state agencies and local and regional programs designed to manage derelict vessels. Most removal projects in Florida require environmental permitting from the Florida Department of Environmental Protection or the U.S. Army Corps of Engineers, depending on jurisdiction.

The Florida Fish and Wildlife Conservation Commission (FWC) offers grants that local governments (not private citizens or nongovernmental organizations) can use to get rid of derelict and abandoned vessels after the owner has been provided due process. In fiscal year 2018–19, Florida allocated $1,000,000 for this program. The vessels currently end up in a landfill.

California had approximately 800,000 registered recreational boats in 2018. California State Lands Commission has an Abandoned Vessel Program, which provides the commission (and some local jurisdictions) the authority to remove problem boats blocking or polluting waterways. California's Division of Boating and Waterways sponsors a no-cost Vessel Turn-In Program (VTIP), aimed at the boater. Although recycling and dismantling usable parts can be part of these removal and disposal programs, the fiberglass hulls still end up in a landfill.

Nixon spoke at a national Sea Grant conference and received a strong, positive reaction from Washington and Oregon. Washington is working on its fiberglass boat recycle program, Nixon says. "It's a large boating state with a lot of derelict boats." At press time, RIMTA announced that a NOAA Marine Debris Program grant is allowing expansion of the pilot program into Washington as well as Connecticut, Massachusetts, and Maine.

Washington's proximity to Geocycle, a waste-management organization owned by international cement manufacturer LafargeHolcim, could be a geographic advantage. Meanwhile, in 2015, the U.S. Department of Commerce awarded Port Angeles, Washington, a $2 million grant to turn an existing facility into a 25,000-square-foot Composite Recycling Technology Center. The Pacific Northwest potentially has the right mix of partners from the marine industry, government, waste management, and cement industry.

Rhode Island's small size and landfill limits incentivized consumers and industry partners to look for fiberglass-waste alternatives. Larger states with more room and greater landfill resources may not yet feel the pressure the Ocean State is facing, but when they do, Rhode Island could lead the way on the fiberglass recycling front.

"One of the most valuable things we produced out of this is the model," Ridley says. The cement kiln might not be the silver bullet, but it's showing the most potential for the volume of fiberglass that needs to be recycled. We've made great strides," he says, "but it's a long process. The technology may advance and we're hoping the model, framework, and network will be there to provide a template for bringing this new technology to scale."

Examples From Across The Pond

Coastal Europe has challenges similar to Rhode Island's, with limited amounts of high-premium land and thousands of end-of-life fiberglass boats. Norway, a country with a long coastline and thousands of decommissioned boats, is challenged by the fiberglass problem. The Norwegian recycling company Veolia, along with SINTEF Materials and Chemistry and other regional partners, developed a chemical process to separate a boat's polyester and fiberglass, allowing both parts to be reused.

Some European governments are considering limitations and bans on landfills and dumps. Germany has restrictions against disposal of composite waste in its landfills. In 2018, France enacted an eco-tax for the disposal of end-of-life boats to stem France's rising costs of dismantling and recycling them. As of 2018, China, once the consumer of the world's trash, is no longer accepting U.S. recyclable waste.

Theresa Nicholson is an award-winning writer who sailed the world on her sailboat Tosca for more than a decade. She is currently based in Sarasota, Florida.