The July, 2004 Seaworthy article, "Hurricane Preparation Starts with Three Considerations: Location, Location, Location" made the point that when your boat has to be left in the water, deciding where it will be safest is more important than any other decision you'll have to make to protect your boat. No other decision comes close. Stripping the boat and adding extra lines, while critical, won't do much to protect a boat in a crowded marina that will be exposed to breaking waves. Entire marinas that were "protected" from the surge by low-lying spits of land or seawalls have been devastated in storms. 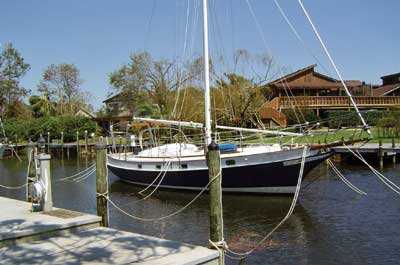 Other issues of Seaworthy have also dealt with the problem of where not to leave your boat during a hurricane. In this issue, Seaworthy will look at one of the most secure places to leave your boat when it has to be left in the water: A residential canal or narrow waterway. The latter includes the heads of creeks and small rivers, mangroves, and bayous.

There are never any guarantees in a hurricane, no matter where you leave your boat, but there are some obvious advantages to securing your boat in a narrow body of water. For starters, there won't be large, breaking waves, which are like wrecking balls in a storm. But equally important, a boat can be secured in the middle of the waterway with long lines ashore, which allows it to rise and fall with the surge. Accounting for the surge is much more difficult at a dock; lines can be run to more distant pilings, but lines stretch and pilings and piers will be much closer, typically only a few feet away. Boats that are anchored or moored can rise and fall with the surge but also face the considerable risk that the anchors (yours or someone else's) will drag or the pennants will fail. Given the large number of boats in some areas, scope can also be a problem.

Securing a Boat in a Canal — A Few Considerations

Despite the considerable advantages, many boats in canals have been damaged in recent hurricanes. Most were on lifts or at docks where they were still vulnerable to high winds and the surge. All it took in a canal was one or two boats breaking loose to damage a lot of other boats. A beamy 33' cruiser had been tied in the middle of a canal in Punta Gorda, for example, with four 5/8" dock lines (probably the boat's working dock lines) broke loose and destroyed four other boats. While the concept of tying the boat in the middle of the canal was excellent, both the number and size of the lines were inadequate for that size boat in a hurricane. Eight lines should be the minimum.

Another problem in past hurricanes has lines secured to trees that were blown over. The most vulnerable trees in a storm are non-native "exotics" such as palm trees, which have notoriously shallow root systems. Pilings, most indigenous trees, and even earth augers screwed into the ground are a better alternative.

A BoatU.S. member in Port Charlotte watched a neighbor's boat that had been centered in a canal get bashed against a seawall because its nylon lines were being stretched too far in gusts. No mention was made of what size or how many lines were used.

One solution would have been to distribute the load by using more and larger lines. Using braid-on-braid lines, which has about 50% less stretch than three-strand, would also have helped. Probably the best remedy would be to use some slightly longer polyester lines with the nylon. Polyester has about half as much as nylon braid but is far more resistant to chafe—about 10 time more resistant. By making the polyester line longer, the nylon lines can absorb the initial force in gusts before being brought under control by the polyester lines.

Finally, whichever lines you decide to use, try to keep the number on any one cleat or piling to two. That way if there's a failure, the boat will still be well secured.

The benefit of multiple long lines to shore can't be overstated: longer lines allow the boat to rise and fall with the surge without coming into contact with pilings, piers or seawalls. John Myran's 38' sailboat, shown above, has been through four hurricanes in the canal behind his Gulf Breeze, Florida home since 1995.

Here's What John Did Right to Prepare His Boat

Here's What John Did Wrong

Nothing. John did everything right.

John's boat survived all four hurricanes without a scratch. During Ivan his house wasn't so lucky; the 130 mph gusts and 12' surge did considerable damage to the structure and furniture. John and his wife were not able to live in the house for six months while it was repaired. Where did he live? The boat!