Why You Should Use A Float Plan

When your day doesn’t go as planned — and you’re not back at the dock when expected — ­someone needs valuable info to send the cavalry. 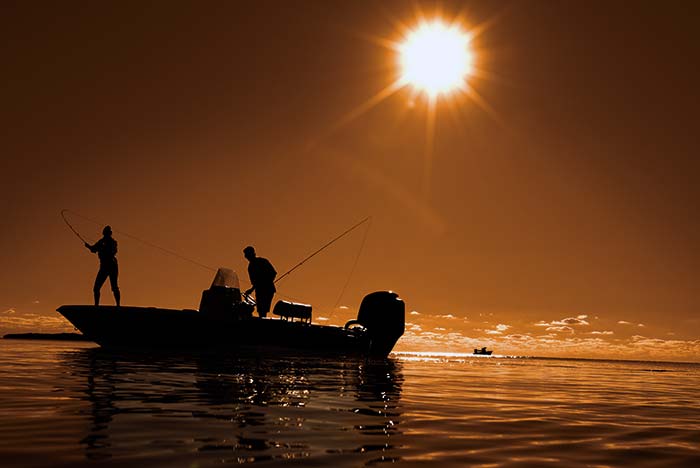 A good day on the water can go bad — fast. A float plan can ensure you get the help you need before it's too late. (Photo: RBFF/Jim Gallop)

You're a few miles from shore, wrapping up a few hours of fishing, when you turn the key to start the engine and hear "click." Your battery is dead, and you're too far from shore to get a cell signal. You told a friend you planned to be home before nightfall. As the sun sets, you realize that's not going to happen. The next day your friend realizes you're not home and calls the Coast Guard. They ask what kind of boat you're on, the color, what kind of trailer you have, where you launched. Your friend doesn't know any more than that you're on a small boat with an outboard. A wide area search and rescue is launched with no way of knowing where to start.

Scenario 2: On the way back from a nice outing off the east coast of Florida, a thunderstorm suddenly kicks up and a huge gust flips your small boat, dumping you and your nephew in the water. Your electronics are wet, and all you can do is hold on to the hull in the chilly water as the sun sets. It's Saturday and you're not due back to work until Monday. No one knows anything more than you "went out in the boat somewhere."

These two scenarios have two things in common. First, they're both actual events, and second, both skippers needed a float plan. In the first instance, the man was found after an exhaustive search that started in the wrong place. In the second one, the men were located nearly four days after capsizing and spent a few days in the hospital recovering. In either case, giving a float plan to a trusted person would have allowed rescuers to quickly locate the distressed boaters and prevented unnecessary time and expense for searchers.

Float plans are useful for any boat, whether it's a kayak or cruising yacht. Here is a blank one to get you started. Fill it out completely and give it to someone reliable. Be clear about when they should take action. You don't want them to panic if you're a few minutes late, but you also don't want them to delay too long. It's better to notify rescuers and have it called off when you show up a little late than wait overnight while you may be treading water.

Whether you are on the water for an afternoon or a month-long excursion, a float plan can be a lifesaver. Download a copy of the BoatUS Float Plan to get you started.

A float plan includes all the pertinent information the Coast Guard will need in a search, including the names of the owner and operator of the vessel, description of the operator and passengers, and information about the vessel. It will also include info about your trip including departure date, departure location, destination, your planned route, if you will have a buddy's boat close by, and your expected return time. Also, consider adding another page with photos showing the make and color of the boat along with any identifying markings, and the size and brand of your outboard. And don't forget to notify your emergency float plan contact when you reach your destination and if you materially change your plans. Some details in float plans may vary depending up on the length of your trip.

My partner and I recently completed a month-long, 950-mile cruise up the East Coast. Using a BoatUS float plan gave us peace of mind, especially on longer legs. We came home with a few suggestions to share with fellow boaters.

1. During your trip, try texting, emailing, or/and calling your float plan contact person to check that you can get through.

2. Text or call your contact at arrival and departure points during an extended trip, especially one with several longer legs.

3. If your boat has an MMSI properly registered and an AIS properly set up, your contact (or even rescuers) can plug your MMSI number into an AIS tracking website to pinpoint your location and watch your progress. (Note that the websites aren't always up to date.) BoatUS Members can request a free MMSI number.

4. If you're buddy boating, encourage your friend(s) to file a float plan, too, and tell your contacts you're traveling in company, following the same itinerary — useful info if help is needed. Also, if both boats have MMSI-enabled VHFs, try calling each other's MMSI number periodically to check in. Calling by MMSI number keeps channel 16 open for emergencies as it starts its transmission on dedicated digital MMSI channel 70.