The Fish Are Listening

What sounds do fish hear — and how do they affect their behavior? Join us for a scientific dive into their auditory world. 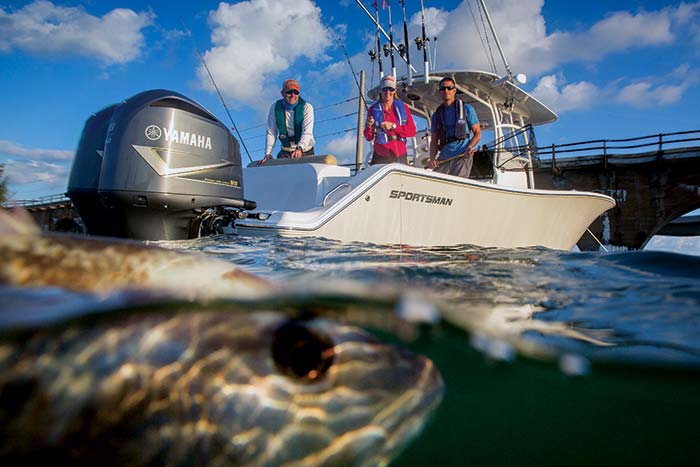 Sounds from inside the boat, such as talking, dropping tackle on the deck, music, or slamming a hatch, are transferred into the water, often scaring away the fish you’re trying to catch. (Photo: Yamaha)

Ask any angler how people spook the fish and ruin a hot bite. Noise is sure to quickly come up in the conversation. Slamming boat hatches, revving outboards, and hoots or hollers are all known fish-spooking sounds that can send scaled critters scurrying. But the effect sound has on our quarry is rarely understood by anglers with any sort of real depth. More importantly, having a deeper understanding of what fish hear — and how they hear it — could give you a leg up on the competition.

To get the straight scoop, we went to Dr. Arthur Popper, emeritus and research professor at the University of Maryland's Laboratory of Aquatic Bioacoustics, an expert when it comes to what and how fish hear. We asked him to consult on and contribute to this article so that you can gain a new understanding of the sounds beneath the sea, and hopefully become a better angler.

How To Stop Spooking Fish (What Fish Hear)

Unlike us humans, fish hear using an inner ear located inside the brain cavity, just behind the eyes. There's no need for an outer ear, as the fish's body is about the same density as the water, and so sounds travel through the water, the fish, to its ear. Beyond that, fish ears are, in many ways, similar to the ears in mammals; in fact, the ear first appeared in fish hundreds of millions of years ago, and later ears evolved to work on mammals.

Just what range of frequencies can a fish detect? To put their hearing abilities in perspective, remember that a teenage human can ideally (without accounting for hearing damage) hear sounds from about 20 Hz to 20,000 Hz. Most fish, both in freshwater and salt, detect sound from 40 Hz up to 500 or 1,000 Hz (though some, like salmon, only hear to about 400 Hz, while others, such as herrings, can hear to over 3,000 Hz).

So most species have a range of hearing that's more limited than ours. The best hearing fish, however, and perhaps the best hearing of all animals, are shad. These fish can hear sounds to almost 200,000 Hz, which reaches even higher frequencies than dolphins or bats can hear. This was discovered by Dr. Popper and his students, and their experiments suggested that shads may have evolved with ultrasonic hearing to detect the echolocation signals of dolphins, and thus avoid being eaten.

For a point of reference, consider some examples of musical instruments. The frequency of a bass guitar ranges from 41 to 262 Hz, as compared to an acoustic guitar, which ranges from 82 Hz on the low end all the way up to 1,397 Hz. And a cymbal would be more like 3,000 to 5,000 Hz. Bottom line? Most fish species hear only relatively low frequencies. But at the same time, much of the sound in human speech, boat engines, walking, music, and other noises we make aboard contain plenty of low frequencies that fishes are likely to hear.

Want to listen to the sounds fish make to communicate each and every day? Visit dosits.org, to hear the sounds different fish species make in the wild.

The lateral line (a line of small pores that sense water movements and vibrations), is found along the upper body and head of most species of fish and sharks. The line detects signals up to about 100 Hz, but there's a catch. The lateral line is only able to detect those signals if they're within a few body lengths of the fish. So the lateral line may overlap a bit with the ear in the range of frequencies it can detect, but detection is at very short distances. The role of the lateral line is primarily to detect water movements near the fish, from other nearby fish (assisting in schooling behavior) or potential predator or prey objects nearby.

Fish use their hearing abilities to monitor the "acoustic scene," the sounds in the environment that give the fish information about what's going on around them. These sounds come from everything from movement of the water's surface, to rain, to the sound of other animals. Some fish, such as cod, haddock, toadfish, croakers, and drums, also make sounds to communicate with one another, including to find a mate. Hearing the acoustic scene enables fish to learn about activities and objects in their environment that may be much farther away than the fish can detect with their eyes or other senses. In other words, they use their hearing to expand their world of information. And that information includes our presence in or around their environment. When you slam that hatch or crank that generator, you may be alerting the fish to a potential threat — you.

When you slam that hatch, you may be alerting the fish to a potential threat — you.

In human terms, it's no different than the way we constantly monitor the sounds around us. Think about driving your boat, and hearing sounds of the engine and your friends talking, even when you don't see these things. If there is a change in the acoustic scene — such as the sound of another boat approaching — you are aware of it perhaps even before you see it. Fish more or less monitor their surroundings using sound the same way.

Wait a sec! We catch fish from trolling boats that make plenty of noise, we catch fish with a stereo playing loud enough to vibrate through the hull and transmit that acoustic guitar into the water, and we catch fish next to bridges with trucks constantly rumbling overhead and transmitting sounds down through the structure. Shouldn't those fish be scared half to death by all that noise? Nope. Just as all sorts of animals (and humans) become accustomed to perpetual sounds that don't abruptly change, it's likely that fish do exactly the same thing. In fact, the fish may quickly learn to ignore these sounds — at least until there's a sudden change in them. Note to self: An idling engine may actually be less likely to spook those fish than an engine that's abruptly started and stopped.

The plural of "fish" is also "fish," but "fishes" has a few uses, and both are acceptable. In biology, "fishes" is used to refer to multiple species of fish, while "fish" is used for plural fish of the same species. grammarist.com

The Sounds Of Success ... And Failure

There are a number of takeaways anglers should bear in mind after considering how and why fish hear. The first is that traditional theory of making loud, sudden noises spooking fish is certainly true. But beyond that, consider other human-made contributors to those sounds beneath the surface that you have no control over. In scientific parlance, these are called "anthropogenic sounds." A pile driver working in a quiet creek, a water skier constantly starting and stopping, or a backhoe dropping rip-rap along a shoreline are all erratic noise-creating activities that might affect fish behavior patterns and spook them or even drive them from the area. When you notice such activities nearby, might it be time to consider relocating?

Another issue with anthropogenic sounds is that they can "mask" the ability of a fish to hear. Think of the difference in the acoustic scene you personally experience at a crowded party versus the one in a quiet library and how it might affect your behavior. At the party, as more people arrive and sound levels go up, a loud clap or laugh may be masked or partially masked by the din and probably wouldn't evoke much of a reaction. But in the library, that same noise could be startling.

Indeed, masking goes beyond anthropogenic sounds and could be an important consideration for anglers to take into account. When the water's rough or other natural noises are present, the sounds you create may be masked and less likely to have an impact.

What about all those lures that claim to make fish-attracting sounds? To our knowledge, no man-made sounds have been proven scientifically to attract fish. True, fish may become conditioned to respond to a sound when paired with food (such as at a fish farm's feeding station). But as far as all those claims you'll see on a lure's packaging, be forewarned — they're likely more conjecture or marketing than fact.

When all is said and done, one must recognize that there's a lot more regarding what fish hear that we don't know than there is that we do know. Little research has been done on how sounds specifically affect a fisherman's success rate. Mostly we have conjecture.

But no matter what you might surmise, one thing's for sure: The sounds you make will have an impact on how many fish you do or do not catch. And that slamming hatch or revving engine that startles you will almost certainly startle your quarry as well.

Get Inside A Fish's Ears

You can take a look at a fish ear in the photo at top right taken by Dr. Xiaohong Deng, an expert on the anatomy of fish ears. This is from a species called Antimora rostrate, the violet cod (bottom right). In this picture, the front is to the right. There are three circular tubes, the semicircular canals. These are also found in humans and are involved in telling the brain when your head is rotating. Fish also have three other structures, called otolith organs. These are the white structures seen in the photo. Two of these, the utricle and saccule are found in humans, and help us know the position of our head as we bend it. We need this and the rotation information so we can adjust our eyes to focus on objects even as we move. The third otolith organ in fish, the lagena, evolved into the cochlea in mammals, the part of the ear that does the hearing. In fish, all three otolith organs are responsible for hearing. The white otoliths are solid structures made of calcium carbonate. Interestingly, fisheries biologists have discovered that the otoliths have rings that, like the rings in trees, indicate the age of the fish. 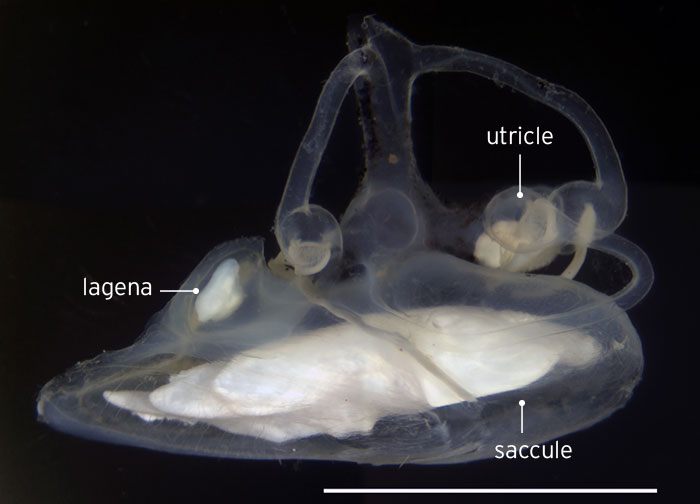 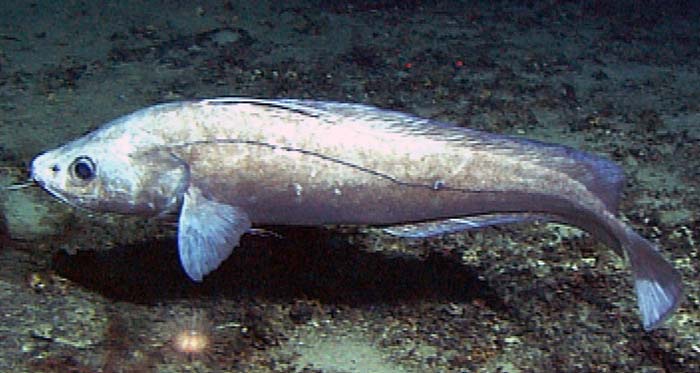