Our Leopard 42 catamaran, Valiant Lady safely rode out three major hurricanes anchored in about 12 feet of water just off the Intracoastal Waterway in North Palm Beach, Florida. Here's how. 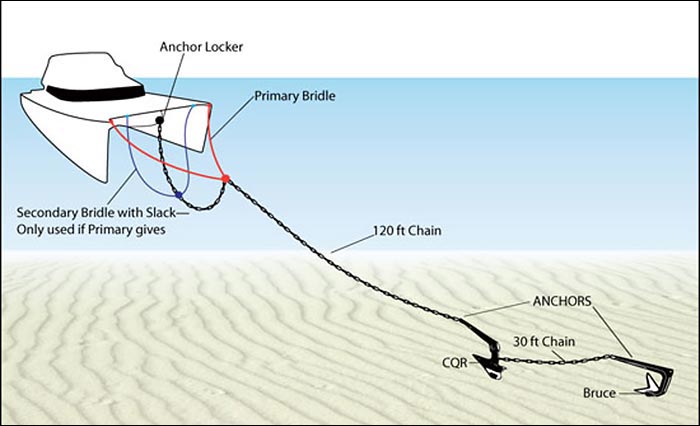 Before Frances, our preparation consisted of removing all of the sunshades and windshields, removing the jib from the roller furling headstay and securing the mainsail to the boom as snugly as possible with line. Halyards were run out to the bows so they wouldn't slap the mast and chafe along the spreaders.

For anchoring, we relied on a single rode with a 33-lb. Bruce and 65-lb. CQR set in tandem. The Bruce was attached to the crown of the CQR with 30-ft. of chain and then 130-ft. of 50mm X 10mm galvanized chain anchor rode from the CQR to the boat. We also put a float on the Bruce, which let others know its whereabouts and made retrieval easier after the storm.

A stainless stopper in front of the windless secured the chain and took all pressure off the windless. In addition, a bridle connected to each bow provided elasticity to absorb the tremendous shock loads. As insurance, we rigged a secondary bridle and attached it loosely to the cleats on the cross member between the bows. This technique eliminates chafe points so that chafe gear was unnecessary. (One thing I neglected to do was lock down the wheel, which allowed the rudder to swing back and forth and bent several shackles. Prior to Jeanne and Wilma the wheel was locked down.) 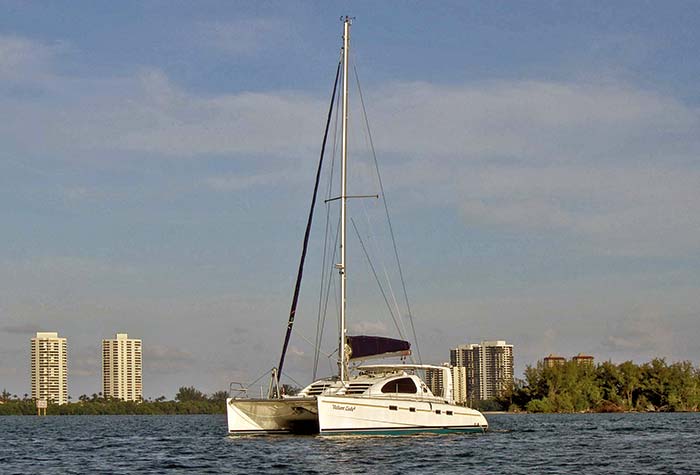 Valiant Lady's anchoring arrangement. Note that the system could also be rigged on a monohull.

A friend and I selected a spot where our boats would be well sheltered with plenty of room to swing. After Valiant Lady was anchored, we anchored his 40-ft. monohull about 100 yards to the south. He used the traditional method of setting two rodes at 90 degrees off the bow. One rode was a tandem headed by a Fortress FX 85 and 20-ft. of 5/8 in. chain connected to a 45-lb. Spade, 20 more feet of chain then led to a swivel and two 110 ft. 5/8 twisted nylon lines went back to a bridle and separate cleats on the bow. On the other side, he rigged a Fortress FX37 with 20-ft. of chain and 120-ft. of three-strand nylon rode. He used the web-type chafe protection around the line at the chocks. This proved to be inadequate; it moved during the storm and left the line unprotected. Fortunately, it did not chafe through.

We set our boats out two days before the storm because we wanted to have plenty of time to get everything done right and do last minute checks. We also had to take care of our homes. Just before the storm, another boat anchored between us.

My friend's boat didn't drag but the latecomer, who probably just dropped a single anchor and left, did drag and damaged my friend's boat. Had it dragged when the wind was from the south, he would have hit us. Sometimes you have to be lucky too; no one dragged onto us. We were fortunate; if my friend had not secured his boat as well as he did, it could have sustained more damage and possibly been lost. The boat that dragged was found over a mile away and was a total loss!

The system worked so well in Frances that we used it again in Jeanne and Wilma with exactly the same result: Valiant Lady survived without damage.