Why Does Marine Gear Cost So Much?

If you trailer your boat, here are some trailer tips for repairs that can prevent the most common breakdowns and general inconveniences. 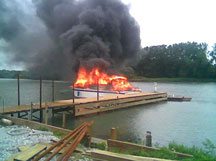 An automotive starter may cost a lot less than a marine one, but it is also not ignition protected and, as in this case, can lead to an explosion and fire.

If you hang around marinas, you've heard it many times and probably said it yourself: Just because it says "Marine" they think they can sell it for twice as much! No one wants to pay exorbitant prices for something simply because it is labeled "For marine use." But is that all there is to it? Or are there good reasons why some things simply cost more if they are built to go on a boat?

Boats do have unique safety requirements and meeting them costs money. Any piece of electrical equipment that goes in the engine compartment on a boat must be ignition protected to prevent an explosion or fire. Safety equipment is often subject to much more stringent standards than for automotive or home use. In order for a CO alarm to be UL listed for a boat, for example, it has to pass tests for humidity, vibration, saltwater vapor, and temperature extremes. The manufacturer has to submit several samples to a UL lab for testing, which cost around $25,000. Without the tests, the unit can’t be labeled as meeting the safety standards, which is the only way you’ll know if it will work safely – when you need it – on a boat.

Building something to withstand the rigors of the marine environment also adds to cost. Cars don't have to deal with flying salt spray, vibration, and pounding waves. They are not regularly dropped several feet, or flexed from side to side. Those conditions mean that parts and accessories for boats typically have to be made of stouter stuff than for automobiles, or, for that matter, for houses and RVs. Not just any metal or plastic will do. Stainless steel has to be substituted for chrome-plated brass, aluminum alloys have to be of the highest quality, and plastics must be extra strong and UV resistant for marine use.

Not only do marine manufacturers often have to build to higher quality and more rigorous safety standards than their automotive or home hardware counterparts, their market is much smaller so it’s harder to recoup their costs. While there are places where you can substitute materials purchased at Home Depot, in these three areas in particular the marine label means the products will not just last longer, they will be significantly safer when used on a boat than their shoreside cousins.

There’s a big reason some marine gas engine parts cost more than their automotive counterparts – they’re specially built for enclosed engine spaces where, unlike the open spaces in cars, explosive fumes can accumulate. Marine carburetors are specially designed not to spill gas when they become flooded and they are not interchangeable with automotive units. They’re also equipped with a backfire flame arrestor that isn’t required on cars. In one claim, a fire started when the flame arrestor was taken off by the owner to troubleshoot a rough running engine. The engine backfired and with no flame arrestor, the engine cover ignited and burned most of the engine’s wiring and rubber parts.

Fuel pumps for automotive use have a hole that allows fuel to dribble out if the pump’s diaphragm fails – marine fuel pumps don’t for obvious reasons. Marine-rated ignition parts and alternators have the added cost of being manufactured to avoid sparks during use, which would prevent an explosion if a leak were to go undetected. Fuel hoses are far thicker and stronger than their automotive counterparts; they have to be able to burn for two and a half minutes without leaking. They also have to be tested to earn the Coast Guard-required SAE J1527 standard, which is costly.

Don’t cut corners on wiring. A few years ago, a marine surveyor in Washington State surveyed a 30-foot powerboat for a prospective owner. The survey stopped once he got to the boat’s wiring that the previous owner proudly pointed out as new. The owner had tried to save money by buying rolls of Romex-type household wiring and painstakingly routing it throughout the boat. Romex wire is made of solid copper, which is fine for houses, but eventually can work-harden and break with the motion and vibration of a boat. Often, it only breaks part way, which causes heat to build up, which can start a fire. Boat wiring must be manufactured to the UL 1426 standard (Electrical Cables for Boats), which, among other things, requires that wire be stranded, not solid; it also requires that boat wire sheathing resists oil and heat and be flame retardant. 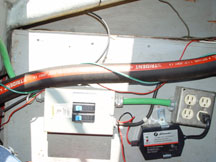 A household breaker box purchased at a hardware store can also spark and cause fire or an explosion.

According to a study published by Seaworthy a few years ago, nearly a third of all boat fires were caused by wiring problems, many of which were due to substandard wiring that chafed or arced. The extra expense associated with safety can save your boat and crew, and wiring isn’t the only part of the electrical system that’s critical to safety.

According to a study published by Seaworthy a few years ago, nearly a third of all boat fires were caused by wiring problems, many of which were due to substandard wiring that chafed or arced. The extra expense associated with safety can save your boat and crew, and wiring isn’t the only part of the electrical system that’s critical to safety. 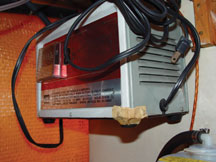 This automotive battery charger was mounted in an engine room where the lack of ignition protection could have led to an explosion or fire.

Battery chargers are another example; while a typical automotive charger only needs to function in a garage, battery chargers for boats may be mounted inside an engine room where the temperatures will be high and vibration would tear apart a cheap charger. Marine units need to meet the American Boat and Yacht Council (ABYC) A-31 standard that requires them to be able to operate continuously in temperatures of 122ºF and be able to withstand peaks of 158ºF. Car chargers don’t have to meet these specs. Even batteries designed for boats are different, made with thicker plates and a tougher case.

Any piece of electrical equipment that goes in the enclosed space of an engine compartment on a gasoline-powered boat has to meet at least one important criteria – it can’t give off sparks that could ignite a gas leak. Bilge pumps, water pumps, lights, battery chargers, inverters, and switches all have to be specially manufactured so they can’t spark.

Electronics on a boat are subject to severe conditions, especially if they get used out on deck. A handheld VHF or GPS installed on a flybridge, for example, must be designed to withstand rain and salt spray. Marine electronics are usually rated to the J.I.S (Japan Industry Standard) and given a score of four (splashproof) to seven (waterproof up to a meter below the surface for a short time). Aside from having to use more expensive components, the cost of waterproofing and testing increases prices.

Radios and CD players for cars work on a boat, but a radio made for boat use usually has circuit boards that have a sealant sprayed over them to protect from moisture and come with better quality non-corroding wiring. Speakers have to have their magnets shielded so they won’t affect compasses. All boat electronics have to be able to deal with substantial voltage fluctuations that occur on boats, and which do not occur on cars where the battery is almost always being charged when equipment is in use.

Stainless steel costs substantially more than conventional steel, and bronze is much more expensive than brass. But stainless steel and bronze are also far more corrosion resistant than the alternatives, which is why they are so often used on boats. Anyone who has inadvertently bought products made of Zamac, a cheap alternative to stainless that’s made with zinc, knows that it looks just like stainless when it’s new, but has less strength and will quickly corrode in saltwater. 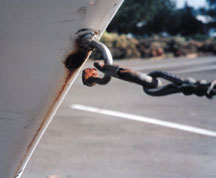 Fittings purchased from a hardware store are far less likely to be high quality stainless and far more likely to rust.

Hose clamps from a hardware or auto parts store are often not stainless (or the soon-to-be-rusting screw is not stainless) and can fail, allowing a thru-hull hose to come loose and possibly sink a boat. A magnet that is attracted to the screw and not the band probably means the clamp is cheap and should not be used. (It should be noted, however, that the magnet test is not infallible; Dick Barber, a representative of Crucible Steel, who makes things like stainless prop shafts for boats, says that certain stainless steels used in tools and kitchen knives are magnetic. Other types, even 304 and 316, which are commonly found aboard, may have some level of magnetic property depending on the way the alloy is made. Cold working, such as forming a part without heat will introduce magnetic properties in some stainless and areas around welds can also show magnetic properties.)

Here’s one reason that thru-hull cost more than kitchen fittings: ABYC standard H 27.6.1 “All materials shall be galvanically compatible and resist degradation by saltwater, petroleum products, UV light, ozone, cleaning compounds likely to be encountered, marine growth, and the effects of heat aging.” Brass fittings found at a hardware store won’t meet these criteria. Even though they might look like more expensive bronze, they will rapidly corrode on a boat. Bronze is not only more expensive to produce than brass, a bronze thru-hull must also have passed a UL ammonia test to prove it’s capable of handling marine head discharges. Plastic thru-hulls have to be tested to withstand sunlight and chemicals. And any marine thru-hull has to be able to handle a 500-pound force for 30 seconds in its most vulnerable direction – try that with a hardware store valve.