A Breakthrough In Propulsion

The world of boat props is about to be disrupted in a huge way with the invention of the MX-1 Sharrow. 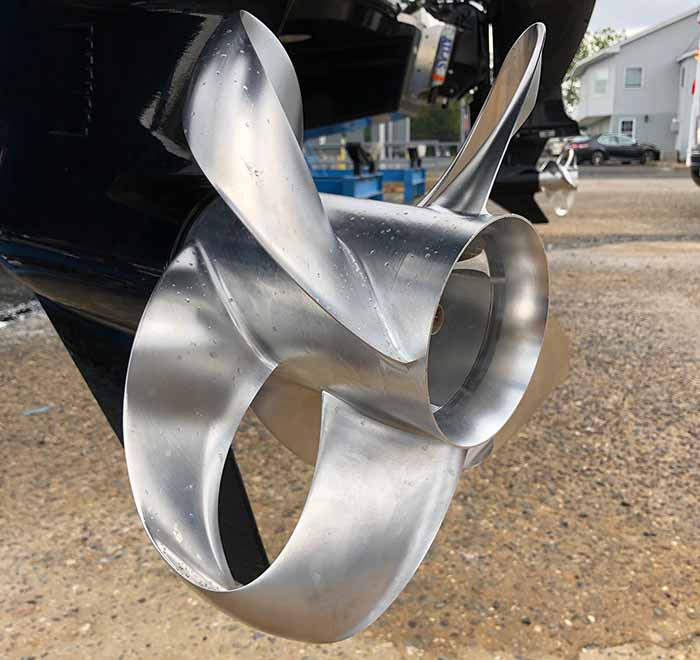 Without blade tips, the MX-1 is proven to be up to 15% more efficient than conventional props.

We've had fast-planing powerboats driven by propellers since the days of the rum runners, but, truth be told, prop technology hasn't made many leaps and bounds since that time. There have been tweaks, modifications, and improvements, but the basic formula of prop blades springing from a hub has always remained the same — until now.

At the 2020 Miami International Boat Show, Philadelphia-based Sharrow Marine introduced the culmination of a seven-year research and development project called the MX-1 Sharrow Propeller. Unlike every prop that's come before it, rather than blades, the MX-1 has loops of metal attached to the hub.

How does this change the dynamic? In a nutshell, much of a prop's inefficiency can be blamed on the blade tips, where vortices and cavitation (commonly called tip vortex cavitation, or TVC) form, creating turbulence and sapping efficiency. Simply put, the loops on a Sharrow have no tips. The net result is an efficiency gain of between 9% and 15%. But just as important, eliminating the cavitation vastly reduces vibrations and noise and makes for a smoother, quieter boat ride.

Company president Greg Sharrow tells us that the development of the MX-1 can be credited to music videos.

"I was trying to solve the problem of reducing unwanted noise from drones while filming live music productions," he says. "I've always thought it would be cool to use a drone to get cameras closer to subjects and film them from onstage, but you can't use drones for music broadcasts because they're too noisy. I knew that most of the noise comes from the blade tips and is caused, in part, by tip vortices. So, I'd have to find a way to eliminate them."

Sharrow teamed up with the University of Michigan Marine Hydrodynamics Lab and funded the development of a 12-stream dye injection system that allowed researchers to see the patterns of water mixing downstream of a propeller. Sharrow then had extended testing done, both in the lab and on the water, to validate the efficiency boost, with additional third-party validation performed by Applied Universal Engineering (AUE) and HS Marine Propulsion.

"We compared the results of the Hydrodynamics Laboratory testing with the Sharrow Propeller prototype design performance estimates," says John Dannecker of AUE. "These results were compared with equivalent standard propeller data. There was strong correlation for the efficiency improvement observed in the initial design. In the next phase, we designed an in-water test program at full scale with conventional propellers and prototype Sharrows. Our measurements validated that the design target efficiency claims were achieved."

Dannecker also points out that in the marine industry, a mere 1% to 3% efficiency improvement in propulsion performance is considered significant.

When will you be able to spin a Sharrow on your own boat? Very soon. Though Sharrow has custom-milled propellers to date, the high price ($5,000 to $10,000) has prevented them from entering the recreational boating market thus far. But Sharrow had the first MX-1 built via a casting process on display at the show. Pricing has been set at $2,000 for cast stainless-steel models, which Sharrow says can be reserved now (with a $100 deposit) and will be delivered by spring 2021.