After a series of the most destructive hurricanes in history struck the BVI, Puerto Rico, and other islands, members of the informal Puerto Rican Navy traded fun raft-ups for serious rescues.

A succession of Atlantic hurricanes have battered the Caribbean in recent years, each so massive that they've rewritten record books, each bearing names that will live in infamy for the islanders who survived them: Matthew, Irma, Maria, and most recently the Category 5 Dorian, which struck the Bahamas' Abaco Islands on September 1, 2019. It left hundreds of people missing or dead, and the beautiful archipelago devastated and facing years of rebuilding.

What follows, though, is not a story about the destruction created by all this unleashed nature. It's actually an inspiring story about hope, generosity, and the power of boaters when they pull together.

Before Dorian, in September 2017, Hurricane Irma, a Category 5 tropical cyclone with 185-mph winds, began hammering the islands of the Caribbean, finally slowing down at Key West, Florida. By then, the most powerful hurricane in history had killed 129 people, shuttered 90% of BVI tourist accommodations, the lifeblood of the economy, and produced 7 trillion watts of energy, twice as much as all bombs used in World War II. At press time, barely half of visitor accommodations were back online, according to Travel Weekly, a B2B news publication that covers the travel industry.

That same September, hitting people when they were already down, Hurricane Maria grew to Category 5, devastating the Virgin Islands, Dominica, and Puerto Rico, and is regarded as the deadliest hurricane in U.S. history, killing an estimated 2,975 Americans in Puerto Rico.

Dealing with so many natural disasters has been a monumental medical and financial challenge for these underfunded island governments. Beyond responses from professional humanitarian organizations such as the Red Cross and others, recent years also have seen the rise of loosely organized volunteer groups of boaters who've tried to help do what governments can't or won't do, starting with the Louisiana-based Cajun Navy, formed in the aftermath of Hurricane Katrina's flooding of New Orleans in 2005. Against official advice, that ad hoc fleet of boat owners mobilized to help rescue their fellow Gulf Coast Americans, and have since helped in other national flooding emergencies as well.

An unrelated, but comparable band of intrepid American boaters came to be called the "Puerto Rican Navy," but for a much different reason than their stateside counterparts. To start, it's not a branch of any official military; it's a group of enthusiastic Puerto Rican boaters dedicated, at the beginning anyway, to having a lot of fun. Every year at the end of July, a fleet of power- and sailboats would embark on the 94-mile voyage from Puerto Rico to Virgin Gorda in the British Virgin Islands. More than 200 vessels, from small center-consoles to 40-foot power and sailing catamarans and fully loaded fishing boats, would raft up in the turquoise waters for the ultimate family beach party known as "Christmas in July." 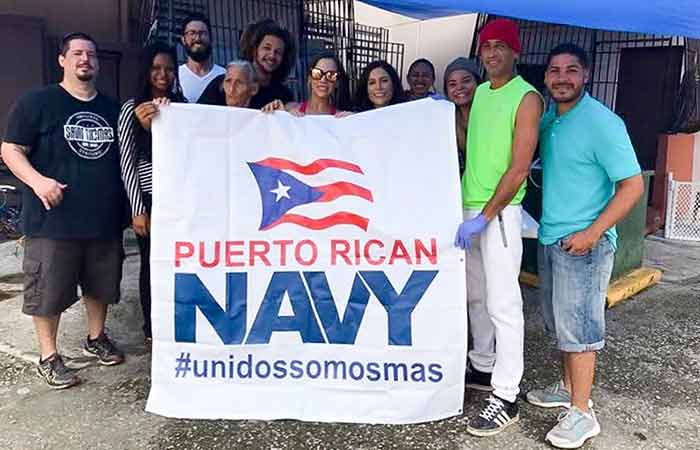 Held annually for 15 years, the event was organized by Puerto Rico's Wally Castro of Wally Castro Marine, Marcos Rivera of the beverage brand Gasolina, and the British Virgin Islands Tourist Board. According to Castro, a late summer family holiday is traditional for Puerto Rican families, giving parents and children time to relax and play together before school starts. Their annual presence and affinity with the locals eventually earned them the affectionate nickname, the Puerto Rican Navy.

Over the years, many in the Puerto Rican Navy have come to consider BVI residents as family. The events of September 6, 2017, put that relationship to the test. According to Castro, even before Irma struck in 2017, members of the group knew the storm could be catastrophic. Through word of mouth, text messages, and social media, the "navy" mobilized. Castro credits their swift response to the instinct he describes as, "boaters' DNA."

In the aftermath of Irma, Puerto Rican Navy boats were the first to arrive in the BVI with aid — "loaded to the gunwales," as one local sailor described on Facebook. Castro says they brought supplies, food, and even a security team in case the need arose. The sight of the devastation, he says, was something he'll never be able to forget. 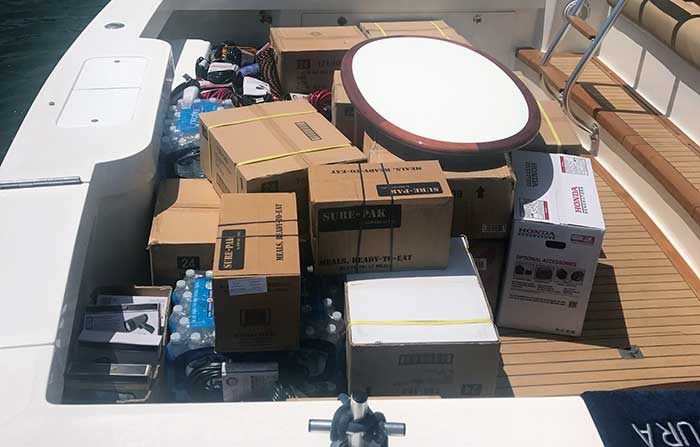 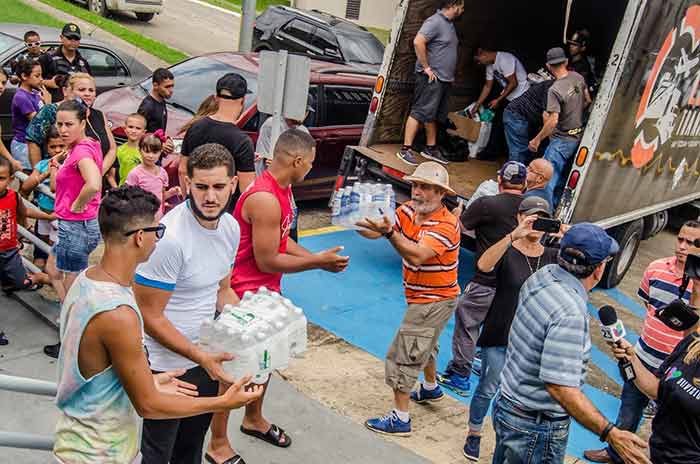 In the aftermath of Irma, Puerto Rican Navy boats were the first to arrive in the BVI with aid, loaded to the gunwales with supplies, food, and even a security team in case the need arose. (Photo: Puerto Rican Navy)

For Natalie Rossy, owner of the Puerto Rican trucking company Logistics Transport Corporation, it began with a call from a friend in Florida whose family was stranded in St. Thomas with no food or water. Against U.S. Coast Guard advice, and with the remnants of the hurricane lingering, Rossy and a friend took a small boat on the two-and-a-half hour crossing from Fajardo, Puerto Rico, to St. Thomas. They returned to Puerto Rico with nine desperate people aboard, then provided them with hot meals and transportation to hotels or to the San Juan airport. Then they headed back out. In total, Rossy and her friends brought 16 shell-shocked people from the Virgin Islands to Puerto Rico.

When the group put out a call for donations, 17 giant 48-foot containers were filled and transferred to boats that, in turn, carried the food and medical supplies to each of the territory's islands. For Puerto Rican Navy member Ricardo Montano, generosity turned into heroism when he and his daughter arrived at the island of Jost Van Dyke to deliver supplies and medical assistance and found Gertrude Callwood-Coakley, the proprietor of Gertrude's Beach Bar, trapped by a fallen tree. Montano got her onto a helicopter for evacuation to a Puerto Rican hospital. Later, he expressed the sentiments of those who came to do whatever they could. "Even though I'm from Puerto Rico, I consider myself a local. I know the people here," he told The BVI Beacon, one of the islands' national newspapers.

After Irma finally passed over the islands, food, water, and basic necessities were in short supply, says Miles Sutherland-Pilch, general manager of Nanny Cay Resort and Marina in Tortola, BVI. His sister made the run in her boat from Tortola to St. Croix, one of the U.S. Virgin Islands. The last thing Sutherland-Pilch expected to see at Nanny Cay was five Puerto Rican Navy boats entering the harbor. Soon the five became 35, loaded with canned and dried food, tarps, hygiene products, baby items, and medicine. From what they brought, food packages were assembled and handed out to the surrounding community — "Given to the right people at the right time," Sutherland-Pilch says. 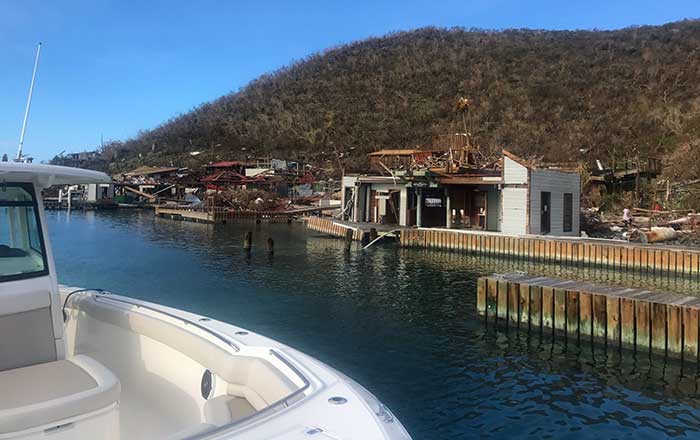 The sight of the devastation, they say, is something they’ll never forget. (Photo: Puerto Rican Navy)

Incredibly, just days later, another Cat 5 hurricane, Maria, hit the Puerto Rican Navy's own island. Island-wide sentiment on the BVI was profound regret that they were in no shape to return the kindness so selflessly extended to them. Soon after the hurricane struck, the Puerto Rican Navy mobilized again to save their own people, just as they did for their BVI neighbors.

Once again, Rossy's company played a crucial role. CASAS, an organization of Puerto Ricans in Orlando, donated food, water, and medicine. Rossy's picked up supplies, and drivers brought containers of food to the port in Jacksonville, which was then shipped to Puerto Rico. Before government aid was in place, food and water were being delivered daily to a public housing complex so meals for 200 people could be prepared. Orphanages received clothes, shoes, food, water, and toys.

A year later in 2018, the BVI was once again open for business. Some of the usual destinations were gone or still closed for repair, some were open with limited services. But despite slow recovery progress back home, in July 2018, the Puerto Rican Navy brought its support back to the BVI, bringing with them the spirit of celebration, family ties, tradition, and rebirth. 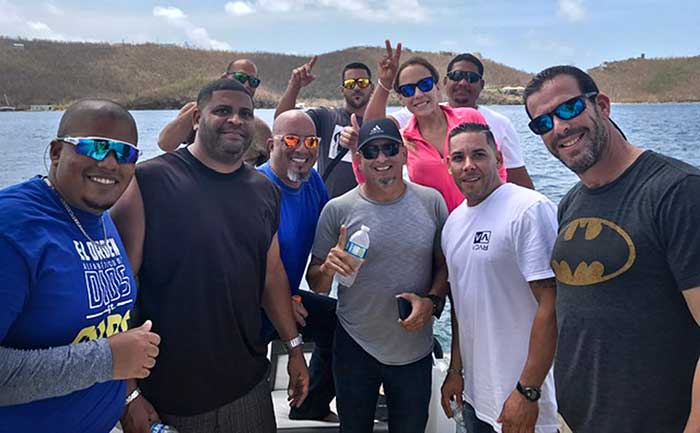 On Savannah Bay in Virgin Gorda, the Christmas in July event began again. All day, thousands of boaters, locals, and tourists crowded the beach for a day of salsa dancing and live music. From business owners to individual citizens, islanders were eager to show their appreciation to the Puerto Rican Navy, as again and again it could be heard: "You're Puerto Rican? Let me buy you a drink!" At Nanny Cay (as in other marinas and businesses throughout the BVI) they threw a Puerto Rican Navy Appreciation Party. Staff, guests of Nanny Cay, and the local community came to say "thank you."

Anyone who's ever attended a BVI full moon party is familiar with the steel ball stuffed with firewood and set ablaze. On the beach at Nanny Cay, a welder fashioned a similar structure. Instead of a tribute to the full moon, this iron firebox, etched with the words "PR Navy" and the nation's flag, became a flaming tribute to the ties of family, friendship, and boater DNA.

Much To Be Grateful For

Marcos Rivera, the de facto co-leader (with Wally Castro) of the Puerto Rican Navy, is a local hero for his tireless devotion to helping those in need. As a marketing manager for Pan American Grain, an agro-industrial company that imports, processes, manufactures, and distributes rice, coffee, and other products, Rivera says he's grateful to be in a position to help others. 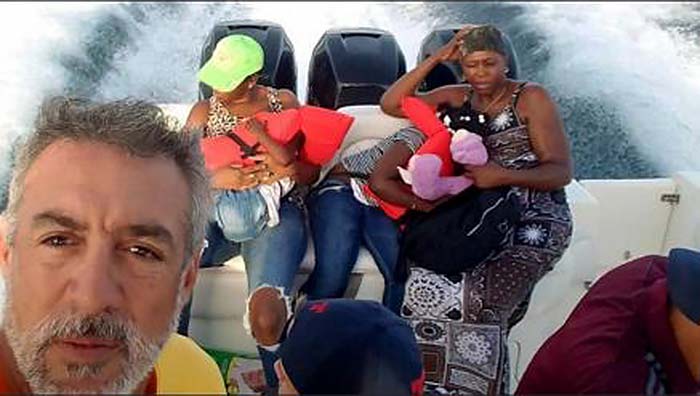 He owns three boats — a Meridian 53 motor yacht, a Donzi 38 go-fast boat, and a Contender 34 center-console. After Hurricane Irma ravaged the BVI, he enlisted one of his boats with the Puerto Rican Navy fleet to ferry water, food, and generators to the BVI, then shuttle homeless Bahamians to safety back in Puerto Rico. When Hurricane Irma struck his homeland a few weeks later, Rivera set up a makeshift kitchen to cook gallons of seafood paella for those who lost their homes. The need hasn't stopped since, and neither has Rivera.

When Hurricane Dorian destroyed Abacos in the Bahamas last fall, he used his clout at Pan American Grain to load 20 pallets of rice onto a ferry to ship food to the stricken islanders. His neighbors, knowing well of Rivera's generosity, also contributed food, water, and goods.

When a series of massive earthquakes in January 2020 severely damaged homes and cut electricity for most of Puerto Rico, Rivera fired up another makeshift kitchen to cook paella for 500 people, day after day. Absent natural disasters, he cooks paella for the homeless in Puerto Rico on the last Saturday of every month.

"I love to cook," he says, "and you can feed a lot of people with paella!"

Rivera, who also produces the annual Christmas in July raft-up festival on BVI's Virgin Gorda, says his humanitarian drive comes from a deep sense of gratitude. "God gave me a second opportunity for life," he says. When he was 13, aboard his father's boat, a terrible accident claimed his father's life, but he survived. As an adult, he recovered from a life-threatening illness. Rivera says he feels a responsibility to give back, given his good fortune, and "give thanks," by helping others in need whenever he can.

Niambi, of Maryland's Eastern Shore, enjoys sailing on Chesapeake Bay and the BVI.