Book Review: Into The Raging Sea

Thirty-three mariners, one megastorm and the sinking of the El Faro by Rachel Slade. 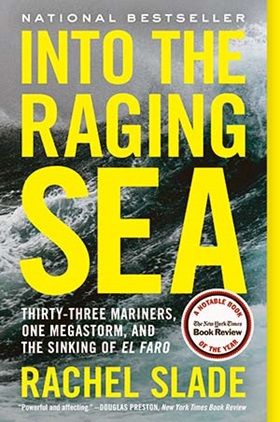 This book should make you angry. As an experienced sailor, you will relate to and understand the situation and the language. You have made decisions on when to go or not go, and what route to take. You have downloaded weather data. You have talked with your crew about plans and schedules. And you may have sailed across the same waters. You wouldn't have done it this way. "Into the Raging Sea" is the story of El Faro, the 790-foot container ship that sank off the Bahamas during hurricane Joaquin on October 1, 2015. It's entire 33-person crew was lost, mostly because the captain made bad decisions. But there is more to it. The stories behind the story include corporate mismanagement, chain-of-command traditions, personalities, low morale, job insecurity, and regulations that allow "grandfathering" of existing equipment.

Author Rachel Slade did extensive research and comes at this story from many angles. She is sometimes brutally honest in her assessment of the people and organizations that were responsible. The author's facts come from her access to the transcript of the 26-hours of bridge conversation captured by the voyage data recorder (VDR) and U.S. Coast Guard and National Transportation Safety Board (NTSB) hearings, transcripts, and reports. But Rachel did not stop there. Her writing includes insight from experienced mariners including pilots, masters and mates that sailed on El Faro and her sister ship, El Yonque; men who designed and built the ship; and interviews with Coast Guard and NTSB investigators and other Coast Guard personnel. There is a very personal slant to this story and Rachel spent time with El Faro families and dedicates much of the book to telling their stories.

The tragedy took place during El Faro's routine 1,100 nautical mile, 2-1/2 day run from Jacksonville, Florida, to Puerto Rico. At the time of departure, a tropical storm was about halfway along the route, about 150 nautical miles off, and approaching the route at 5 knots. El Faro had a satellite-connected NAVTEX dot matrix printer that produced periodic National Hurricane Center (NHC) updates and a private email weather forecasting service manually downloaded and displayed graphically on a computer. And El Faro had the Weather Channel on TV. The chief, second, and third mates along with the engineers monitored NHC and Weather Channel updates. The captain relied on out-of-date and optimistic email weather graphics and sometimes didn't look at them for hours after they arrived. The weather sources didn't agree, and while the crew could talk to themselves and the VDR, they couldn't get through to the captain who was seldom on the bridge. Alternate routes were plotted, proposed, and then rejected. "In industry, hospitals, and airlines people work together to make decisions but not in the Merchant Marine — few succeed when they question authority." That tropical storm, Joaquin, developed into a Category 3 hurricane and the tracks collided with disastrous results.

Morale on board was not good. The bridge officers were uncertain about their careers, and the company, TOTE Services, had passed many of them over for assignments to newer ships destined to replace El Faro. TOTE's management had turned over with many experienced shoreside staff replaced with "numbers men" with no maritime experience. El Faro officers literally had no one to talk to. Once in trouble, past ship modifications doomed them while regulations and inspections failed to protect them. El Faro was originally designed as a roll-on/roll-off ship carrying trailers in the belly like a ferry but was lengthened by 90-feet and converted to carry containers on deck. This changed the waterline height, flooding angle, and center of gravity and should have been considered a "major modification" that would have triggered upgrades to current safety standards, including enclosed life boats — under pressure from the ship owners, Coast Guard and American Bureau of Shipping (ABS) regulators backed off.

One light shines through: U.S. Coast Guard Search & Rescue and its rescue swimmer program. The Coast Guard had proactively stationed extra air crew on Great Inagua Island in the Bahamas in advance of the storm. In the end, they couldn't locate El Faro in time but tried heroically to do so. Only 28 minutes passed between the first distress messages from El Faro and the enormous thud detected by the U.S. Navy's hydrophones off Andros Island. Position reports were conflicting and out of date, and drift models don't work well in 120 knots of wind. If only El Faro had had the current generation of emergency beacon (EPIRB) that broadcast GPS position instead of the older version. That and everything else — if only.