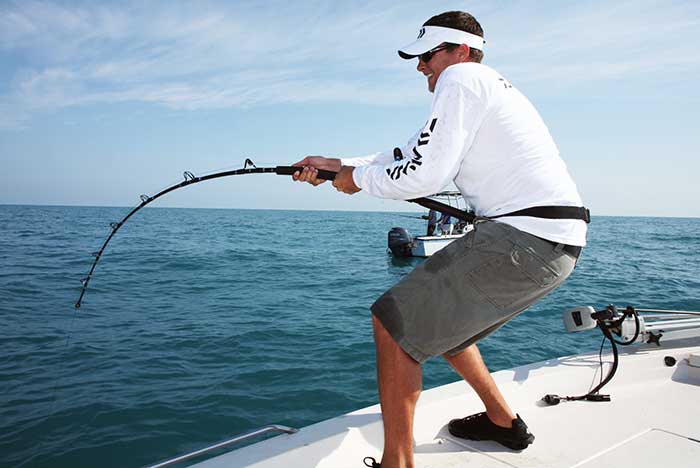 Fishing for goliath groupers is a gut-busting, give-no-quarter fish fight when you have to pull them out of a wreck.

When Capt. Eddie sat down on the deck and braced his foot against the rail, I figured we were into a big one. When his hat fell off and he started to make grunting sounds, I was sure of it. But we'd been this far before and never saw the beast. Capt. Eddie looked up at me with a twisted smile and was just hanging onto the rod for dear life. This could go either way.

What started out as a mystery had become an obsession. Something was living in this wreck 10 miles off southwest Florida, and whatever it was had already beaten us up several times. One thing was for certain: It was real big. But on this day we were maxed out on gear big enough to crank one of these monsters up ... if only Capt. Eddie could hang on long enough.

This started out innocently enough a few weeks earlier when a couple of fishing buddies and I dropped a live pinfish on 30# mono down on a wreck 50 feet deep looking for a grouper dinner. The pinfish barely made it to the bottom. Something big grabbed it, screamed out about 40 feet of drag, got into the wreck and cut the line on something sharp. I couldn't stop it. We sent another pinfish down, but that was it for the day. The monster sulked.

We came back again the next day — same gear, same ending. Something wolfed down the pinfish and took line like the rod was tied to a dragster. I just couldn't stop it. If I tightened the drag any more, whatever it was would pull the rod and reel over the side — and me if I didn't let go. It had to be a big grouper, a shark, a giant ray, or maybe a huge barracuda. It was time to up the gear.

This time we spooled a big reel with 150# braid, added a 2-ounce sinker above a swivel, then more 150# braid straight to a #10 circle hook. Back to the wreck, we dropped down a pinfish, put the rod in a rod holder, and turned the drag to zero. If he couldn't get any line off that reel, he couldn't cut us off in the wreck. We waited. It didn't take long.

The rod bent over 180 degrees, the back of the boat went down 6 inches, and the 150# braid snapped like a rifle shot. A little shaken, we dropped another pinfish. Nothing. OK, maybe we needed a little stretch in the line. Braid doesn't stretch, so we tied an 8-foot leader of 200# mono to the hook with a swivel to the 150# braid, for next time.

A few days later, we returned to the wreck and sent another pinfish down, this time on the 200# mono top shot, put the rod in the rod holder, and set the drag to zero. Within 10 seconds, the rod bent over almost to the water, jerked up and down violently for a couple seconds, then was still. We pulled it up and everything was intact except the hook. The steel hook, thick as a shoelace, broke off at the eye. The fish was gone.

We quickly retied a new hook and sent yet another pinfish down. Immediately the nearly inch-thick stand-up rod bent over almost to the water, the stern jerked down about 6 inches, and then the line snapped with such a jolt the rod almost jumped out of the rod holder. It was time to get professional help.

I asked the guys in the local bait shops if they knew any captains up for the task of fishing for seemingly uncatchable monsters. They knew a couple guys, and they had a good idea of what we were up against. "Goliaths," one guy said. "Great big giant goliaths."

The goliath, once called the jewfish, is the biggest member of the grouper family. Goliaths can live 50 years and grow to behemoth size. Florida's had a moratorium on harvesting goliaths for more than a decade, and as our fishery has become catch-and-release only, their population has grown each year, and individual fish get bigger and bigger. The picture of the Florida state record, also the world record, looks like a 680-pound brown largemouth bass — an amazing fish.

Visit BoatUS.com/Rig-Fishing-Rod to learn how to tie a uni-to-uni knot, including a step-by-step video.

The winds of spring kept us inshore for a couple of weeks, so we enjoyed the opportunity to fish the bridges for pompano and sea trout. Goliaths are known to inhabit bridges and even shallow water and canals, and when I watched a fisherman lower a 5-pound chunk of cut bait next to a bridge piling I knew he could only be after sharks or goliaths. This was the guy we needed. His name was Capt. Eddie. When I told him my story he said, "I'm sure those are goliaths! When the wind drops we'll go."

It took another week for the wind to finally lay down, but when it did, Capt. Eddie said it was time — but we would go to one of his wrecks. It was a shorter run offshore and a little shallower.

We met at the boat and Capt. Eddie rigged up my big reel — 150# braid with a 500# mono top shot straight to a gigantic #16 circle hook. Above the hook he threaded a couple of sinkers through the mono and tied it off with a uni-knot, one of the few knots usable on mono that stiff. The 500# mono is serious stuff, too hard to cut even with a knife. If anything was going to break this time, it would be Capt. Eddie. 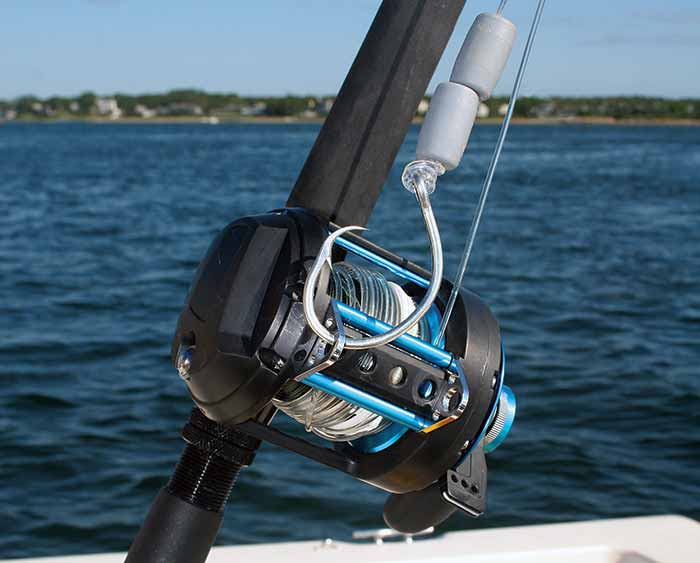 It finally took a rig spooled with 150# braid, a 500# mono top shot, and huge #16 circle hook under 2 ounces of lead to bring a goliath to the surface.

We anchored over Capt. Eddie's wreck, and he pulled a big Spanish mackerel out of his cooler, the one bait he said goliaths can't refuse. He stuck it on the big circle hook and explained as the bait went down that he would hold on to the rod, let the fish take it in the wreck, and then he'd pull it out with the 500# mono, which the wreck couldn't cut. He barely finished the sentence when he had to sit down or go over the side. The battle was on.

It was a short, furious, and profane battle, a hard fought back-and-forth fish fight, exciting to watch with an uncertain end. But Capt. Eddie prevailed, and suddenly a giant brown fish appeared on the surface and lay at the side of the boat as exhausted as Capt. Eddie. It was a goliath, about a 250-pounder. 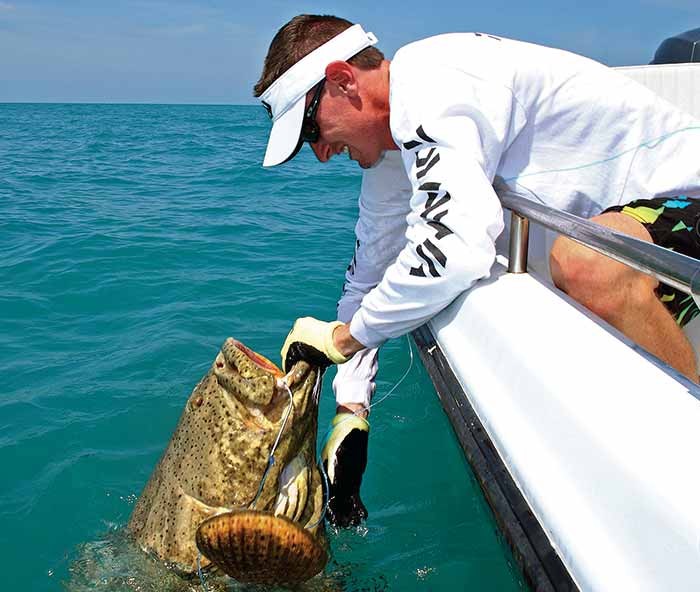 After a short and furious battle, Capt. Eddie brings a 250-pound goliath next to the boat.

Pleased To Meet You

On the next calm day I returned to my wreck lying now in water so clear you could see its dark silhouette on the white sand bottom 50 feet below. I went over the side to find an old shrimper torn apart by hurricanes and fishermen's anchors, its wheelhouse barely recognizable. And then they appeared, slowly emerging from the shadows of broken masts and rigging. Goliaths — five of them — bigger than refrigerators, obviously masters of this wreck. 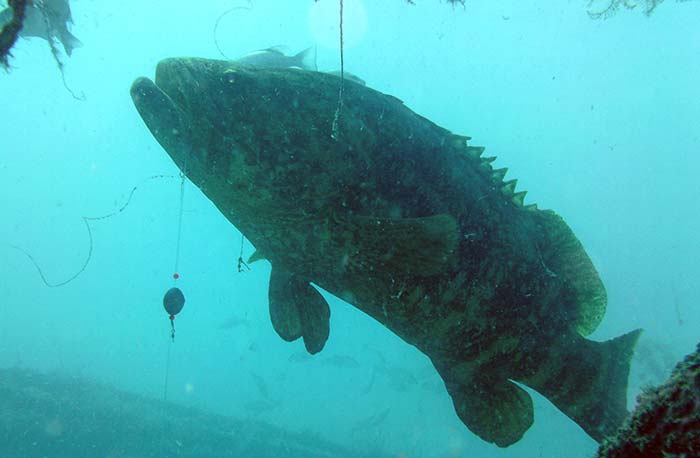 They approached with the slow and ponderous demeanor of monsters that get their way. The largest one met me head on and stopped just far enough away that I could almost touch it. Three fishing rigs hung from his mouth, one still with its sinker, medals of recent battles won, and then I recognized one of my rigs, the 150# braid to a black swivel to 200# mono, hanging out of the left side of his mouth. There was the proof: These were the bad boys that had beat us up, and a few other fishermen, too, by the looks of it.

I returned to the surface knowing those hooks will soon rust and the line will fall away, and these Goliaths will own this wreck for many years to come. I'll find another wreck now to fish for my dinner and leave these guys alone, knowing if I ever feel like getting into a real fish fight, I know where to find one.

If You Plan To Go

Goliath grouper can be found across the Caribbean from Central America, around the Gulf, and up the Atlantic to the Carolinas, but they are most plentiful in Florida. Although a protected species, they are a legal to catch if released, and many charter captains along the Florida coast are rigged up to catch them. Catching a goliath is truly the giant fish of a lifetime, and anglers from around the world go to Florida to catch one. But catching goliaths is not for the faint of heart — or anglers with bad backs. It's a serious one-on-one fish fight where it's wise to have somebody next to you ready to grab your belt and keep you in the boat. Goliath hunts are available in most Florida ports, and it's often not necessary to go far offshore. Many charter captains have only to take you to the nearest bridge to find a giant ready to take you on.

Doug Stamm is a U.S. Coast Guard licensed captain, an aquatic biologist turned professional underwater/outdoor photographer, and the author of "The Springs of Florida" and "Underwater: The Northern Lakes." He lives with his wife, Lucy, and their English setter in the Wisconsin River valley of southwest Wisconsin.