Ish Sure Can Fish!

This California professional bass fisherman overcame many hurdles early in life to turn his passion into a successful career. 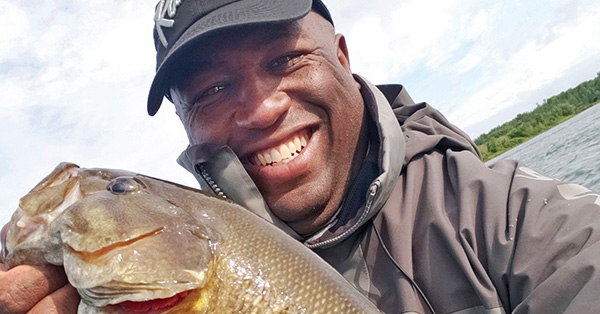 Fishing saved his life, says professional angler Ish Monroe. "My senior year in high school there was a party going on and a bunch of my friends kept asking me if I wanted to go, but I was fishing a tournament the next morning. So I said no. I went home. One of my best friends died that night. I would've been with him."

Ish (short for Ishama) Monroe grew up in San Francisco, and the 44-year-old BoatU.S. member says that when he was in high school, gangs, violence, and drugs drew in a lot of his friends. But fishing kept him out of that. "Fishing really grounded me," he says.

Fishing was a family affair, and Monroe fondly recalls his dad pulling him out of grammar school for "dentist appointments" when the fish were biting. Monroe flashes his million-dollar smile as he tells the story, but those appointments back in the day weren't to get his teeth cleaned, they were to pull on some bass.

"Dad would pick me up and we'd go straight to lake," he says. "I thank him for giving me that base and teaching me how to fish. Me and my dad still go fishing to this day, but instead of him taking me fishing, it's me taking him fishing."

When Monroe's dad retired from a career as a firefighter four years ago, Ish bought him a new Ranger bass boat. It was his way of saying thank you for instilling in him a strong work ethic that always steered him in the right direction.

At the young age of 14, Monroe went to work at Hi's Tackle Box in San Francisco. The shop had a bass club called Bass Holes. Monroe fished a couple of their events, and when he was 16, a friend named Derek Crenshaw asked him to fish a team tournament. They came in third. He was hooked on competitive fishing and never looked back. At 18 he was fishing pro-am events as a pro. He was the youngest guy out there.

Many of the other anglers didn't give the young kid much respect, but he paid close attention to successful anglers like Dee Thomas and Dave Gliebe who were inventing new styles of fishing.

"I had those guys around me, and they talked to me back in the day," Monroe says. "Dave Gliebe gave me a few little tips that I still remember, and it helped my fishing. Dee Thomas is the grandfather of flipping, and that style that he created is my primary style and the way that I win tournaments."

From those early days, Monroe has fished some 250 professional tournaments, notching five first-place finishes in big-time events, and amassed $1.6 million in career earnings. But it was far from easy and he faced many hurdles along the way. From 1998 until 2016, Monroe was the only African American pro on the major BASS (Bass Anglers Sportsmans Society) tour.

"In 1998, I qualified for the pro tour. Other than Michigan and California, I had not been anywhere else in the country. I had not experienced being in the South," Monroe says, and most of the tournament circuit takes place in this region.

He admits he's been pulled over a few times, and when you have a California license and you're driving a sponsor's truck that's registered in Tennessee with a boat that's registered in Missouri, the red flags start popping up. But he's always done as his father taught him: keep his paperwork handy and show respect to law enforcement. He says he's not encountered any serious issues.

Monroe wasn't the first black man to fish on the tour. Alfred Williams from Mississippi holds that distinction. "Alfred was the one black guy I saw on TV fishing, and I thought, I want to do that," Monroe says. He's trying to do the same and help more young people of all backgrounds enter the sport.

"Society says you can't be a professional bass fisherman as an urban youth," Monroe says. "There's no guidance there. Fortunately for me, my parents built a love of fishing in me. I had a great job at a tackle shop, and I still go into that shop and buy tackle there and talk to the owner, Jonah, who gave me my job. My parents were both hard workers, and they brought me up to have a strong work ethic and that has gotten me to where I am today. A lot of kids don't have that, so it's important to me to try to be a role model."

Fishing as a professional is a ton of work. "The preparation, the travel, the sponsor obligations, it all weighs on you." When the season wraps up in August, Monroe switches gears. He puts his bass boat to bed and hitches on his 34-foot Bluefin, which he's in the process of repowering with twin Yamaha 425 XTO outboards. He bought the boat in 2016 and has put nearly 300 hours on it, mostly running out of San Diego.

"Saltwater fishing is my getaway," he says. "One thing about bass fishing is you're confined to a small lake. I can't tell you how many times the tuna or yellowtail weren't biting so we go chase calicos. That's the great thing about the ocean, you can always find something to chase."

When asked if he fishes any saltwater tournaments, he readily shakes his head no. "I took my hobby of bass fishing and turned it into a job. I don't want to do that again."

His passion for saltwater fishing is undeniable. He lights up when talking about it and pulls out his phone to show photos of big grouper, tuna, and wahoo. "To me, there's nothing like that bite."

Charlie Levine is a lifelong angler and boater turned marine journalist with multiple publications. Charles Fort handles our exclusive Reports in-depth tech feature in every issue, our videos, and our investigative features.