Best Day On The Water: Zip 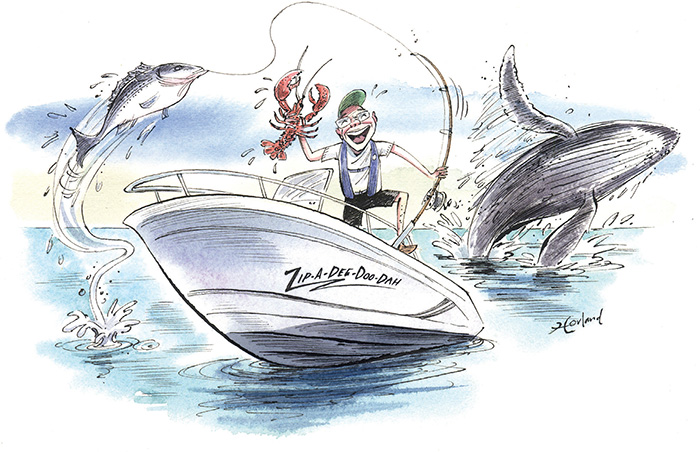 Zip-A-Dee-Doo-Dah is my Cobia 204 CC. It's also the way I feel every time I take it out. Last September, on a sunny, crisp fall day, the folks standing on the Route 1A bridge along New Hampshire's short but beautiful coast, could have heard me humming a few bars from that song as I headed out to see what lobsters had happened into my traps.

It's a short ride to the jetties, then you're out in the Atlantic. I already had a few lobsters in the live well and was pulling my last trap when I heard a tremendous whoosh! behind me. My first thought was that it was a jet ditching in the water while attempting a landing at the nearby air base. I turned to see the black back of a huge whale, probably a humpback, rolling and spewing foam high into the air, 30 feet from my starboard side.

I slowly motored home with a big smile on my face, only to find the waters between the jetties alive with fish slapping and jumping. Pogies! Something we haven't seen here for some time. My first thought was "lobster bait," so I snagged some with a heavy Kastmaster spoon lure on the only rod I had aboard – a one-handed spinning rod/reel with 10-pound test line. I had three pogies in the live well and a fourth one on when, suddenly, my rod doubled over. Fifteen minutes later, I scrambled for the net to land a 15-pound striper, to the cheers of fishermen on the jetties who witnessed the battle.

Lobsters for the pot, a beautiful big striper, and a close encounter with a whale – now that's a Zip-A-Dee-Doo-Dah kind of day!

Mike Thiel is a BoatUS Member.