At the spring boat shows, as you're looking at new boat models, ask about the fuel systems. Important improvements are being incorporated on the inside, that are not visible on the outside.

Fuel systems in boats, even boats of fairly recent vintage, have more in common with those in 1930s-era automobiles. The great news is that this is about to change. The days of overflowing fills and vents will be a thing of the past on newer-model gasoline boats. 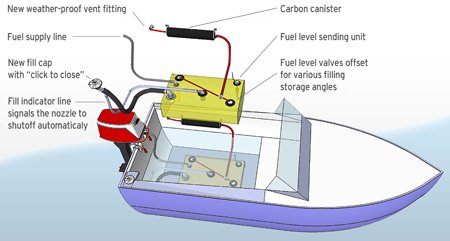 By model year 2013 (July 1, 2012), gasoline-powered boats will incorporate a more advanced fuel system designed and tested to activate the gas pump's automatic shutoff feature, eliminating overfilling. Though no one should leave a boat unattended while fueling, the new system takes the effort out of knowing when the boat is full. Part of this new design is a carbon canister tucked away in the boat's vent line and packed with a special marine-grade carbon. The carbon scrubs the hydrocarbons from the fuel vapor, eliminating fuel odors and contributing to cleaner air. The components also include new fuel lines and tank-construction materials that reduce the permeation of fuel into the line and tank material.

The technology used is nothing new; the secret lies in the valves. These components are mounted on top or in the tank and are precisely calibrated to make sure the tank fills to the proper level every time. By reacting to the fuel level in the tank, the combination of valves sends liquid fuel up to the fill neck, activating the shutoff feature in the gasoline pump nozzle. Ensuring a predetermined level in the tank eliminates traditional vent leakage from the fuel expanding due to the daily temperature rise. This also protects the carbon canister located in the vent line from becoming saturated with liquid fuel. There are some cautions:

New EPA requirements for portable tanks are beginning to appear on the shelves. An innovative self-sealing vent eliminates the need to constantly open and close the traditional screw fitting on the top of the cap. This feature eliminates the need to open and close the vent manually, ending the entrance of water through an open vent. This new technology vents at a predetermined level and even reacts to a vacuum situation, making the collapsed tank a thing of the past. The reason for the addition of the automatic vent is to retain fuel vapor more reliably than depending on users to close the vent every time the tank is not in use.