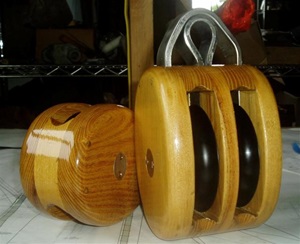 Ball bearing blocks are best for any system on your boat that does not see "static loads," or low-movement applications. Examples of a few recommended ball bearing block applications are main, jib, and spinnaker sheeting systems, traveler cars, and controls, and running rigging backstay runner blocks. Compared to non-ball bearing blocks, ball bearing blocks run freely allowing for increased safety and ease of use. Whether cruising or racing-the sailor can only exert a limited amount of power, so ease of operation and ability to release a line and let it run free is very important and is optimized with ball bearing blocks.

Safe Working Load vs. Breaking Strength: What is the Difference?

It is important to know the amount of load your blocks will see in their specific application in order to choose the right block for the application. If you're unsure, consult a marine professional, such as your sailboat manufacturer, sailmaker, or sailboat hardware manufacturer.

Knowing this, caring for your blocks is simple. Be sure to thoroughly wash and rinse your blocks with soap and freshwater as often as possible. If you sail in saltwater, it is best to flush out your blocks after every sail.

For increased performance, try spraying your blocks with a dry lubricant like Team McLube SailKote in the ball bearing races of your blocks. Dry lubricants like this repel water and contaminants that can harm ball bearing systems. In almost all cases, one application will last an entire season.