Data Buoys: Sentinels Of The Sea

Depending on their home waters, before heading out most boaters will have at least a cursory idea of the weather forecast. More targeted marine forecasts from NOAA, updated multiple times daily, are a staple to a coastal boater's itinerary.

A more recent trend for recreational boaters is access to near real-time data from hundreds of high-tech buoys placed offshore, coastal, and inland from coast to coast. Called "data buoys" or "weather buoys," these serve less as aids to navigation and more to collect data on water and air temperature, wind speed and direction, measurements of waves and swell, atmospheric pressure, and some even measure water quality — all useful information to the boater or angler headed near that patch of water. With the proliferation of multifunction displays (MFDs), and now even smartphone apps, this accurate, fresh data is available at a boater's fingertips.

Boaters, anglers, paddlers, and surfers can use the data to assess conditions before heading out for the day — or not heading out. Charter fisherman use the data to make decisions about the safety of their customers and crew, as well as which locations will be good for fishing. Scientists use real-time buoy data to improve forecasts for the near- or long-term future.

The free BoatUS App shows data buoys in your immediate area on the map. You can select one to save as your “home buoy.” The data refresh rate is set by NOAA, or the buoy system owner, but it is usually updated every hour. Visit BoatUS.com/App to download.

Make no mistake, this network of data buoys is out there first and foremost to benefit meteorologists, oceanographers, coastal planners, computer scientists, marine engineers, and commercial shipping. We in the recreational marine community just get to benefit from the continuous stream of high-quality information. And much like free Wi-Fi, it's easy to take for granted. But some of these data transmitters are run on a tight budget, and there's no guarantee they'll always be in your marine neighborhood.

The alphabet soup of acronyms for the dozens of federal, regional, and local entities that own and operate the various buoys nationwide will make your head spin. So let's start with the big boys at the federal level.

The NOAA National Data Buoy Center (NDBC), which is part of the National Weather Service, owns and operates 245 data collection platforms — 200 deep-ocean buoys and 45 coastal weather stations on structures such as lighthouses, ocean markers, and other coastal landscapes. Within the 200 buoys deployed, they are broken up into three separate networks consisting of weather buoys, deep-ocean assessment and report of tsunamis (DART), and tropical atmosphere ocean (TAO). (For more, see "NOAA Data Buoys" below.)

The weather network of 106 buoys is by far the largest segment operated by one group, and probably the most familiar to recreational boaters. These buoys are deployed around the continental United States, Alaska, and Hawaii.

The observations from most moored buoys are transmitted through NOAA Geostationary Operational Environmental Satellites (GOES) to a ground receiving facility in Virginia, while some buoys use the Iridium satellite system to transmit data. Regardless, all data is recorded and processed by the National Oceanographic Data Center. The U.S. Coast Guard is a critical partner to NDBC, supplying transportation for buoy deployments, retrievals, and other ­maintenance. 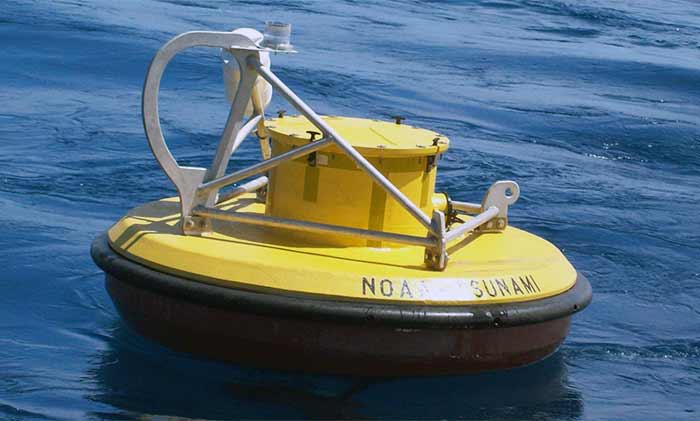 Weather buoys house a variety of sensors and electronics that are typically powered using a solar powered system to provide energy for their expected deployment life cycle; typically three years. The system has processing and telemetry equipment that relay data collected to a satellite constellation in near-real time; generally hourly, but in some instances, multiple times per hour and these data are disseminated to a variety of areas for a host of uses.

Deep-Ocean Assessment and Reporting of Tsunamis (DART) communicate with a separate bottom unit that measures the pressure change in the height of the water column associated with the fast moving tsunami wave and reports this to the surface buoy. The buoy relays this information to a satellite constellation for dissemination — namely to NWS Tsunami Warning Centers.

Tropical Atmosphere Ocean (TAO) buoys are located at or near the equator to report observations such as wind measurements and ocean temperature profiles that are used in the detection of El Niño and La Niña weather patterns.

They consist of floating buoys moored to the seabed — in some instances up to nearly 20,000 feet deep — by a series of lines, hardware, and a weighted anchoring device. The buoys house a variety of sensors and electronics — typically solar powered — with an expected deployment life cycle of about three years.

The data collected from each buoy is relayed to a satellite constellation in near real time (generally hourly), and these data are disseminated to a variety of private service providers and shared publicly. Observations are available at the NDBC website.

"Because meteorological observations are released to the public, mariners have timely access to the data needed to factor into their immediate decision-making needs should they require supplemental or localized information in addition to the available marine forecasts," explains Stephen Cucullu, supervisory general engineer at NDBC.

With the proliferation of MFDs and smartphone apps, accurate, fresh data is available at a boater's fingertips.

Integrated into the NOAA system are various regional consortiums of government, scientific, and educational-backed marine monitoring groups — many of these are tied together under the Integrated Ocean Observing System (IOOS), a national-regional partnership working to provide tools and forecasts to improve safety, enhance the economy, and protect our environment. IOOS implements policies, protocols, and standards, and oversees the daily operations and coordination of the system spread across 11 regional associations from around the coast and the Great Lakes.

Amid the vast array of government owned and operated data buoys is a potpourri of data buoys — more than 130 — owned by various private entities including universities, energy companies, local governments, and nonprofit groups such as the Illinois-Indiana Sea Grant, which partners with Purdue University to own and maintain two buoys on Lake Michigan.

Boaters, anglers, and paddlers use the buoy data to assess conditions before traveling out for the day. (Photo: Illinois-Indiana Sea Grant)

"Our buoys are used less for collecting data than getting people out on the water by giving them peace of mind about weather and sea conditions," says Jay Beugly, an aquatic ecology specialist at IL-IN Sea Grant, who deploys and retrieves the buoys seasonally. "We're happy to have paddlers, anglers, surfers, and boaters use our data."

While federally owned and operated data buoys are paid with federal appropriations, among privately owned coastal and inland data buoys, depending on the integrated array of sensors, a buoy costs about $50,000, and typically costs another $5,000 annually for maintenance, deployment, and retrieval. When things go wrong (and they usually do living in that harsh environment), replacing sensors is part of the overall cost. For example, a temperature sensor can cost between $200-$500, while other more sophisticated sensors can cost upward of $10,000.

The National Sea Grant College Program run by NOAA is a network of 33 Sea Grant colleges and universities involved in scientific research, education, training, and extension projects geared toward the conservation and practical use of the coasts, Great Lakes, and other marine areas.

"We'd like recreational boaters to be aware that because they’re not part of our permanent funding, our data buoys may not always be deployed." That's why IL-IN Sea Grant, among other groups that own/maintain data buoys, welcome donations. The best way to donate to your local buoy(s) is to reach out to the organization that runs them and ask how you can help. You can find out who owns your local buoy via the NDBC website.