Bow and stern thrusters might be handy, but with the right technique you can turn a single screw inboard boat almost in its own length. 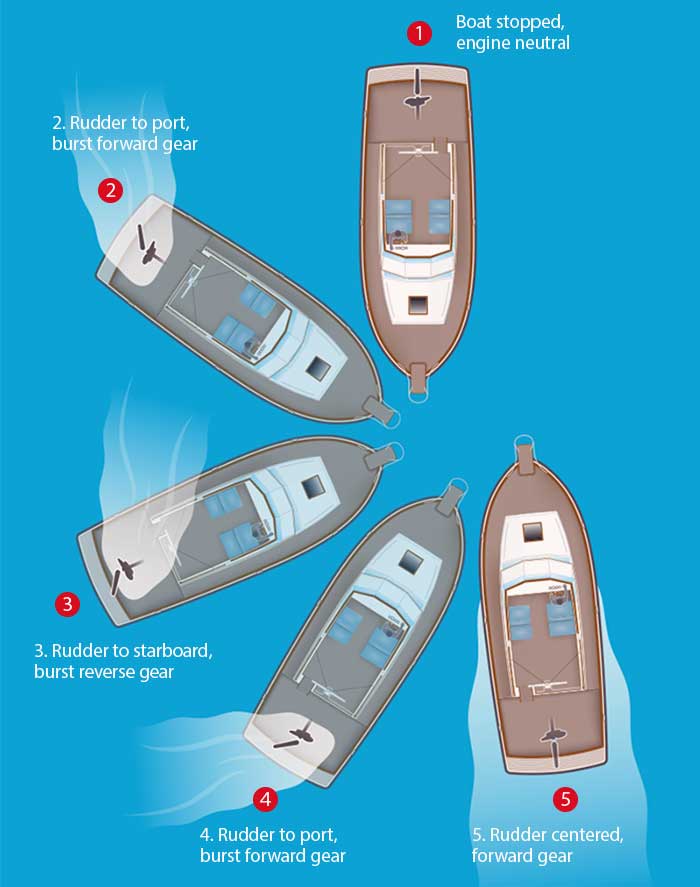 Spinning an inboard-powered boat in its own length is relatively easy for those with twin engines. But what if you only have one engine and no bow and stern thrusters?

Spinning a single engine boat is trickier for sure, but given a little practice, the right technique, and an understanding of how to utilize throttle, gears, and steering to best advantage, you can maneuver a single screw boat with confidence and gain enduring admiration from your dockmates. Using what is known as "prop walk" (something we will discuss more in a future issue), it's possible to rotate a single screw boat pretty much in its own length, handy for turning a boat should you find yourself approaching the bulkhead and a dead end — at the end of a row of slips for instance.

On a calm day with little or no current and with no boats nearby, determine whether your stern normally swings to starboard or port because of prop walk when you're reversing. Practice with the rudder in different positions; turned to port, starboard, and straight ahead to understand how your particular boat handles, both in forward and reverse. My boat's stern has a tendency to swing to starboard when I'm in reverse.

Boat Handling: "Walk" Or Pivot A Boat In Its Own Length

To prepare for the turn, place the steering wheel either hard to port or hard to starboard depending on the direction you want your boat to rotate and how your stern swings in reverse. To begin, use a quick burst of power in forward so that the water against the rudder turns the bow in the direction you want to go. Then alternate, as the conditions warrant, between quick bursts of reverse and forward. It is usually, depending on the boat, unnecessary to move the helm as you shift between forward and reverse. This is because the thrust of the prop acts more on the rudder when forward is engaged but has less effect when in reverse as the propwash goes under the boat and out to the side. It is this effect that we use to kick the stern to one side. One mistake that is common with novices practicing this maneuver is leaving the engine in gear for longer than a second or two. If you do, the boat will start to gain forward or astern momentum spoiling the pirouette. Finally, when practicing this maneuver remember that the boat may not pivot about the center point of the boat. Boats tend to "steer by the stern" so expect the pivot point to be reasonably close to the bow rather than what you might imagine would be the center of the boat.

1. For this maneuver to be effective, start with the boat stationary in the water.

3. Put the engine in forward gear as in this example with the rudder hard to port and then immediately give a short but generous burst of throttle. (This should be no more than a second or two, or the boat is likely to start moving forward, the opposite of what we want.) The stern should swing to the starboard in this example and the bow to port. Bring the throttle back to idle and immediately put the transmission into neutral.

4. The boat should have now started rotating in the direction of the rudder. Now engage reverse gear and give another hefty but brief burst of the throttle. The stern should swing to starboard in this example. If your boat is too sluggish, orienting the rudder to help your turn may be in order, depending on the boat.

5. Repeat steps 3 and 4 to further rotate the boat, if necessary. Remember that in many boats you won't need to touch the wheel, but just swiftly and confidently alternating between bursts of power in forward and reverse will have the desired effect.

6. When the bow of the boat is just approaching the direction in which you want the boat to go, center the wheel and engage forward gear, only this time leave it in gear to propel the boat forward in the direction you want to go.