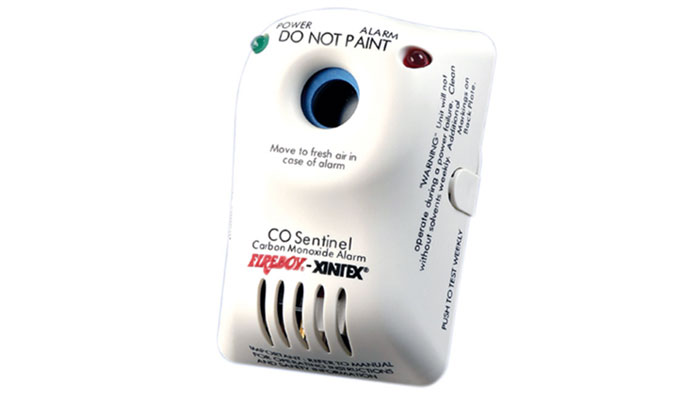 Having one or more sources of fuel on board presents a potential danger, especially if you are unaware of leaks or vapor accumulation. Fuel can include gas, diesel and gas burning appliances for cooking or heating. Other fumes from other sources can also result in dangerous situations. There can even be danger from boats other than the one you're on.

Many boaters have some serious misconceptions about fuel fumes in the bilge or engine compartment. One is that the engine blower will eliminate dangerous fuel vapors prior to starting a gasoline engine. In fact, any sort of fuel leak can create new fumes as quickly as the blower fan can clear them out, so the risk of explosion is always present, whether the blower is running or not. And although diesel vapors are not explosive absent certain other circumstances, high concentrations can make you sick. Atomized diesel fuel, as can come from an injector or, to a certain extent, from a high pressure leak, can be highly flammable or even explosive. The potential for any fuel or other dangerous vapor in any part of your boat presents a risk serious enough to warrant the investment in appropriate fume detectors. Also, it's critical to be able to detect the presence of fire or smoldering.

On a typical enclosed boat you should have detectors and associated alarms that alert you to the presence of CO, fumes (including fuel, solvents gasses and others) and smoke. This normally means that you need more than one type of detector. You may even need more than one of the same type of detector. For example, a smoke detector in an airtight engine space won't help you with a galley fire. A CO detector in that engine space may not help you if CO is wafting through an open porthole into your living accommodations. Depending on your boat and the issues it can present, you should be sure you're covered. This may sound like just another pitch to spend more money than we have, but it's not. Deaths occur regularly on boats because of lack of adequate detectors.

The good news is that some detectors will detect more than one type of problem. For example, some fuel vapor detectors will not only detect gas fuel vapors, they may be able to detect other combustible vapors such as cooking fuels, hydrogen, solvents, and certain cleaning compounds. Also some detectors have multiple sensors. When an alarm goes off at the central module will tell you the location and, if you want to spend the money, some can even indicate the general type of fume.

What you get for your boat depends on your boat, its systems, its layouts and many other factors. And even if you feel entirely confident of your boat (and you shouldn't) keep in mind that other boats in the marina or at the anchorage may be emitting, for example, CO, which is entering your boat through its vents or ports.

With all this in mind, check the specifications for the detectors you buy to be sure that you're well covered. Different detectors perform differently. The labeling should say what they're intended to do. Also, be sure to buy detectors that are certified for marine use. Typically these are not only built better to last longer, they have settings for the boating environment to make them work better for you. One example is that a house CO detector may go off all the time on a boat because it gets a momentary whiff from an engine starting down the dock. Often the owners will get so sick and tired of false alarms that they'll disable the detector — potentially a fatal mistake.

The Effects of Carbon Monoxide

Carbon monoxide (CO) needs special mention. It can overcome a person quickly it can be fatal in just minutes-see the chart below. The most prevalent source of CO is exhaust from gasoline engines and generators. These fumes reach boaters from leaks in the exhaust system, fumes sucked back into the boat, or from other boats. There are many, many ways CO can find its way aboard.

Since carbon monoxide is colorless and odorless, the installation of CO detectors aboard all recreational boats is recommended. The American Boat and Yacht Council now requires all new boats with gasoline inboards or generators to have a CO detector installed. Be sure to use a carbon monoxide detector designed for marine use. These are calibrated at a significantly different standard than household detectors. ABYC (standard A-24) recommends that CO detectors have a "replace by" date on them in the form of MM/YYYY OR "replace by XX months after retail sale" as determined by the manufacturer. Most newer CO detectors last 10 years and give an audible signal when it's time to replace them, but check the specifics for your particular model.


DON'T MISTAKE THE EFFECTS OF CARBON MONOXIDE POISONING FOR SEASICKNESS!