How To Dock A Twin Outboard Boat

There's no need to get stressed out when backing a boat with twin outboards. This handy guide will get you up to speed in no time. 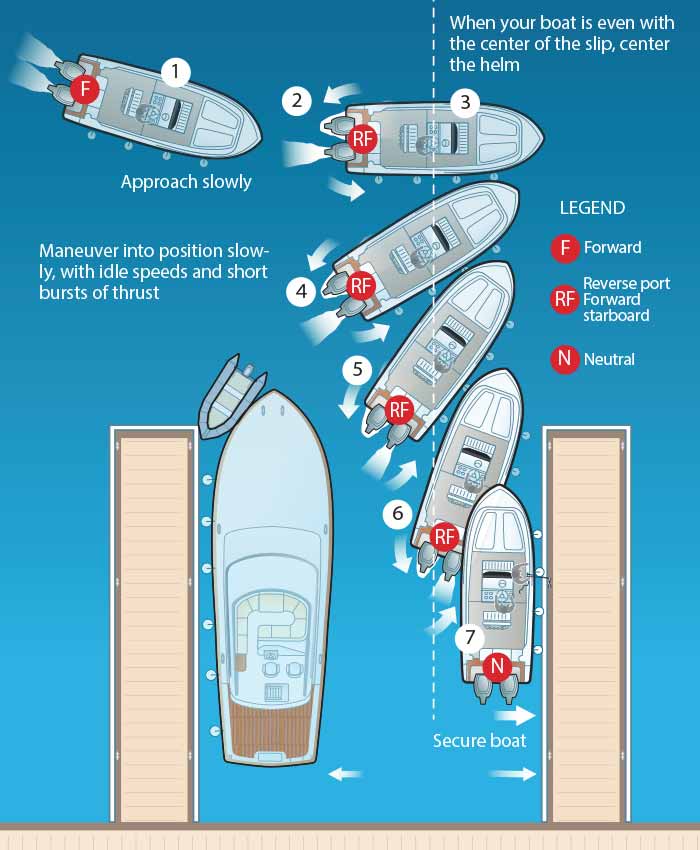 Although it seems counterintuitive, backing a twin-engine outboard boat into a slip is actually easier than backing in a single-engine boat. Having twins means you have the ability to oppose the engines, putting one into forward and the other into reverse, which causes the boat to spin in place. Plus, you have more propeller blade area and thus more “bite” on the water. Even so, the process can still be a bit intimidating, especially to those who haven't tried it before. Never fear, dear boater — we're here to help. Follow this simple process, and you'll have Mom's Mink safely moored up in no time.

How To Dock: Backing Into a Slip with a Twin Outboard Boat

1. Prepare for the docking maneuver ahead of time by deploying fenders and lines as necessary, prior to approaching the slip. Also check for wind and current, so any effect they may have doesn't catch you by surprise.

2. Trim your engines up slightly (using the tilt-trim switch at the throttle), so the propwash goes under the boat where it has the greatest effect. If you don't do this, the propwash may merely hit the transom making the boat harder to maneuver.

3. Approaching the slip at a 90-degree angle, once the middle of the boat is even with the middle of the slip, stop and center your steering wheel. From here on out it's easiest to turn the boat by opposing the engines (shifting one into forward and the other into reverse), and although tempting, it's best not to touch the steering wheel, using only the engines for maneuvering.

5. In a perfect world you'll have no wind or current, there will be plenty of room to maneuver, and you can spin the boat until it's perfectly parallel with the finger pier. Then, getting into the slip is merely a matter of shifting both engines into reverse idle and backing up. But this situation rarely occurs. More likely, you'll have one or more constraints that will force you to continue to maneuver the boat as you back up. One good example of this follows.

6. If there are space constraints and you can't spin the boat around completely, after it begins to turn you can take the forward throttle out of gear, removing all forward thrust. Then, the boat will begin backing up as it continues to spin, and you can get it very close to the slip or possibly even partially into it so you have more room to swing the bow around. Remember, of course, that when you pull the forward throttle out of gear, the rate at which the boat is spinning will be reduced, and you'll need to shift in and out of gear to find a happy medium between backing and spinning.

7. As the boat moves into the slip, you can reverse both throttles briefly, as necessary, to stop all spinning motion. Then back slowly in the rest of the way, coming to rest at the side of the slip. If the bow is too far off at this point, you may have to shift starboard reverse, port forward with a light thrust or make a similar light adjustment to bring her alongside.

Simple, right? Wait a sec — what if a big gust of wind knocks the boat out of kilter, or you misjudged the current and you're suddenly out of alignment with the slip? These things do happen, and there's no blanket statement that can be made as to the best way to respond. In these cases judgment comes into play, and depending on how the boat is positioned and the severity of the outside effects, you may be able to apply a bit more or a bit less power to one outboard or the other to get back on track. Or maybe not. Truth be told, when possible, you can often salvage a good docking job gone bad by pulling away from the slip and starting over. There's no shame to the maneuver, which is something even the saltiest mariner has been through before and will go through again in the future. And a do-over may be your best route to putting Mom's Mink safely back into her slip at the end of a beautiful day on the water.