Behind The Scenes Of The Ocean Race

The Ocean Race is among the most difficult challenges in all of sports — a grueling bluewater test of the best and toughest sailors sprinting around the planet in sailboats that can reach 44 mph. 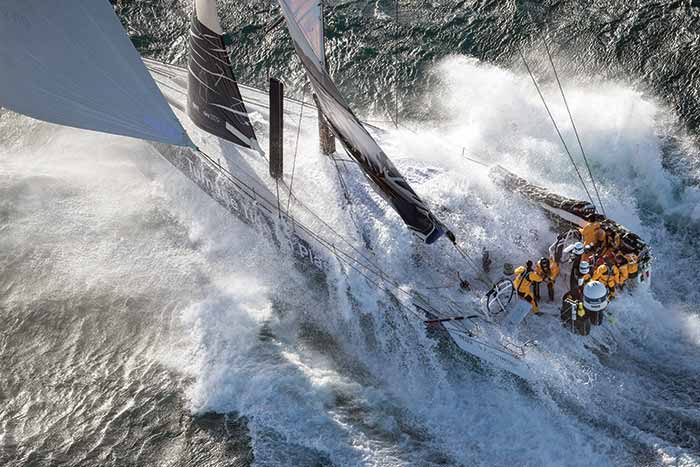 When it comes to sailors, you have your wandering vagabonds, your traditional Corinthian yachtsmen, and your average weekend warriors. And then there are the around-the-world racers, a separate breed of athlete altogether. In the realm of boats, titles such as "The Everest of Sailing" belongs to the Ocean Race, which concluded in late June with what is essentially a photo finish.

Formerly known as the Whitbread Round the World Race (1973–2001) and the Volvo Ocean Race (2002–2021), the Ocean Race is a full-throttle eight-month, 11-leg sprint 45,000 nautical miles around the planet by international crews racing on identical boats. It's a competition to reveal which team has the most skill, and more importantly, which has learned best not only to harness the wind, but to strategize with nature and the sea and integrate their deep knowledge of weather, wind shifts, and currents — to win.

The fact that the latest version of the global race that's held every three years concluded with the closest finish in race history speaks to the high level of competition. Before the final leg, a 970-mile sprint from Gothenburg, Sweden, across the North Sea to the finish at The Hague, Netherlands, three boats were tied atop the leaderboard. The first to finish this last leg would win. After three days of hard sailing, a scant 16 minutes separated Dongfeng Racing Team (China) from second-place finisher AkzoNobel (Netherlands), and 17 minutes from MAPRE (Spain).

Dongfeng skipper Charles Caudrelier of France and his crew made a daring call to take a coastal route to the finish, which squeezed them tight against the shoreline, separate from the other leaders.

"We knew that we would fall behind initially," Caudrelier said. The wind didn't come in on the day they'd hoped for, and the strategy looked as though it had backfired. During their last position report, a frustrated Caudrelier learned they were 27 miles from the finish but still lagging 7 miles behind the leaders. "We thought it was over," he said, but he figured and refigured his weather routing and noticed the wind begin to fill in. "So, I woke everyone up and said, 'Let's push!'" They won the leg and the Volvo.

Fun Facts From The Everest Of Sailing 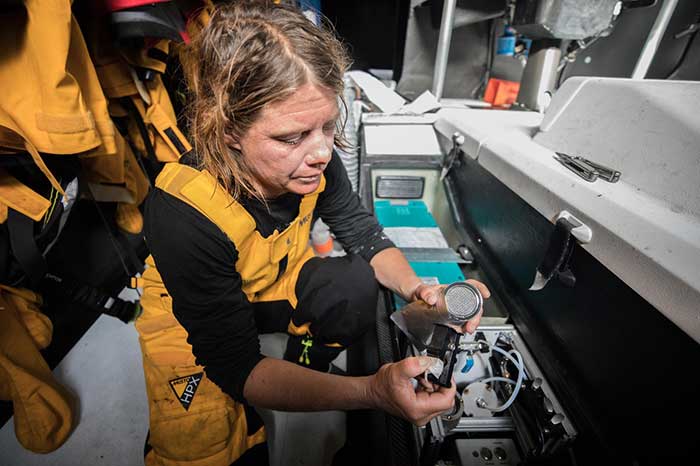 Several of the boats collected water samples throughout the race, which was later analyzed by the GEOMAR Institute for Ocean Research Kiel in Germany. Almost all the water samples contained microplastics. (Photo: Jeremy Lecaudey/Volvo Ocean Race)

The Ocean Race is not for the faint of heart, with crew cramped in austere quarters among piles of damp clothes and foul-weather gear, sleeping in four-hour shifts and, to reduce weight, no fresh food is taken on board, so freeze-dried is the only thing on the menu. Crews experience temperature variations from 23 F to 104 F and take only one change of clothes. The sailors say they often don't get more than three to four hours of sleep per day. 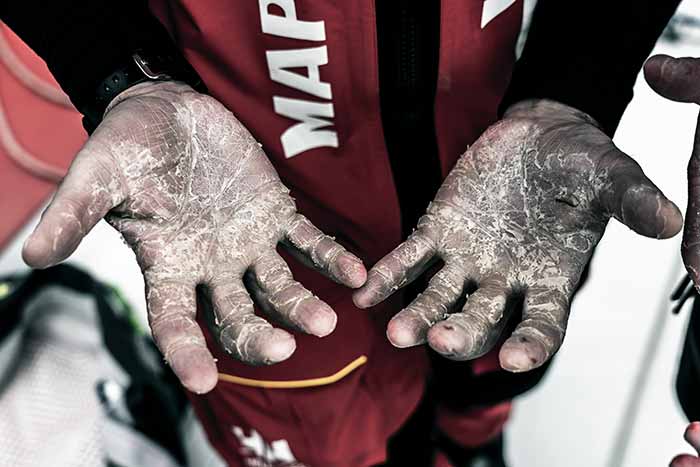 Ocean racing is not for faint of heart. (Photo: Ugo Fonolla/Volvo Ocean Race)

"But four hours off isn't really four hours off. It's just a question of how much can you delay injuries, tiredness, and fatigue along the way," Chris Nicholson, an Australian watch captain aboard AkzoNobel, told Business Insider magazine. The most dangerous times on board are not when surfing big waves. Instead, they come if (and probably when) your thoroughbred boat with canting keel, twin daggerboards, and twin fixed rudders gets damaged, which forces the skipper to slow down. "When you have to slow down, that's when you're at the mercy of the next waves breaking in over you." 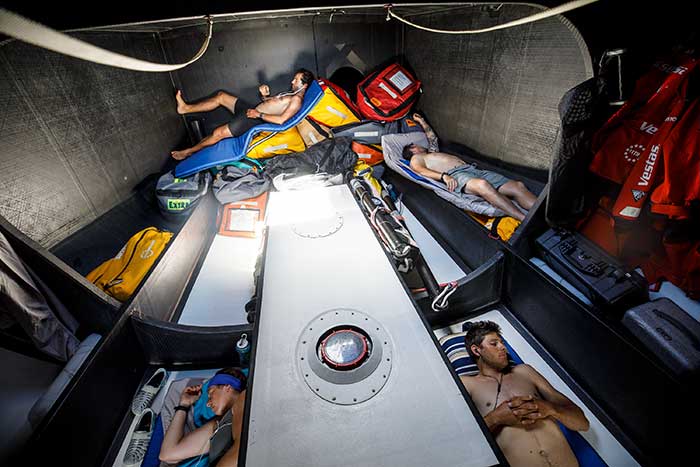 Vestas 11th Hour Racing crewmembers get some shuteye when they can — usually no more than three to four hours a day. (Photo: Avery Ross/Volvo Ocean Race)

Beyond hard work, the race poses real-world dangers. In March, Team Sun Kai/Scallywag crew John Fisher of Britain was swept overboard in gale-force conditions 1,400-miles west of Cape Horn, Africa. Intense rescue efforts failed, and he was lost at sea. In January, Vestas 11th Hour Racing collided at night with a Chinese fishing vessel. Nine of the 10 commercial fishermen were rescued from the water. One lost his life.

Rule changes for the 2017–18 race limited the crew to a maximum of seven. However, to encourage the male-dominated teams to open up to more female competitors, a new rule allowed for two additional crew, bringing the total onboard to nine, as long as those two were women. Not all teams embraced the idea, preferring to go with seven strong men and not take on the additional weight of two women crew and the extra food and supplies. But by the middle of the race, all seven teams had realized that the women were an advantage and added female sailors to their crew. A total of 20 women competed in this year's race. British sailor Dee Caffari was the skipper of Turn the Tide on Plastic. Dongfeng crew Carolijn Brouwer of the Netherlands, France's Marie Riou, and Swiss sailor Justine Mettraux, became the first women to win the epic race. 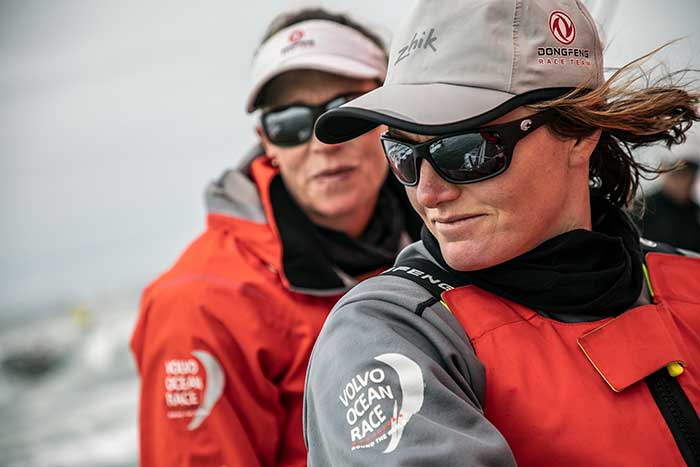 Another world-class marathon that started in July 2018 is the Golden Globe, where singlehanded sailors sail around the world nonstop. Visit GoldenGlobeRace.com to follow the excitement and learn more.

"The intensity of the competition, the manic schedule in port, the stripped-down simplicity of life at sea, the nonstop every-waking-hour concentration is both daunting and addictive," Caffari's Irish crewmember Annalise Murphy posted on her blog.

Murphy is now switching her focus to mastering the 49erFX skiff with teammate Katie Tingle as they set their sights on competing in the 2020 Summer Olympics in Tokyo. Racing sailors have to keep moving, keep sailing, keep looking over the horizon for the next challenge.