Using The SCAN Technique To Avoid Distracted Driving On The Water 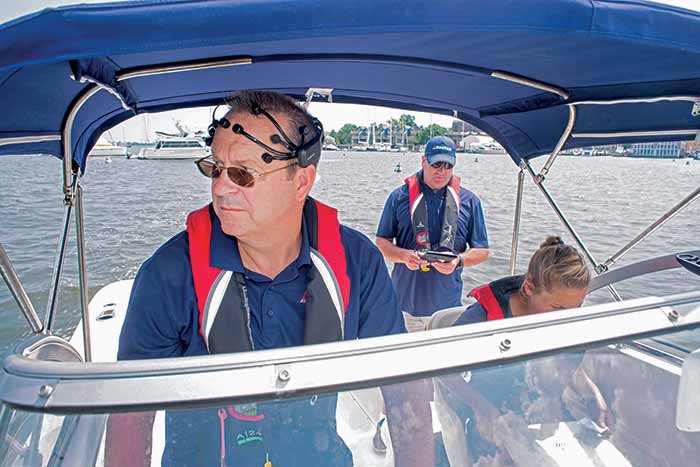 It was far from a typical buzz along the river in a small powerboat. As I scanned the water for markers and other boats and took in glimpses of scenery along the banks of the Severn River off Annapolis, Maryland, something was weighing heavily on my mind. Actually, it wasn't heavy, but it sure was digging into my scalp. "It" was plastic headwear called a "neuroheadset" that fed an array of sensors stuck to various critical points on my head. I dubbed it "the crown of discomfort," which amused me more than the data collectors. But for this editor, it was all in the name of science.

Last fall, I was one of four boaters (two experienced, two novices) recruited to participate in a study initiated by the U.S. Coast Guard and National Safe Boating Council (NSBC), assisted by the BoatUS Foundation for Boating Safety and Clean Water, and facilitated by brainwave measuring company EMOTIV. The goal was to perform a preliminary assessment of the effectiveness of a proposed training program for small-boat operators. The method consists of a formalized repeated scanning pattern and continual risk assessment while the boat is underway. If you're a seasoned skipper, it's what you do naturally.

Pretraining: Each subject navigated a boat as he or she normally would while electroencephalography (EEG) data was recorded, and an observer on the boat logged significant events. My session lasted about 25 minutes.

Training: Back on the dock, we were given instruction on the proposed NSBC method with the acronym SCAN: Search, Concentrate, Analyze, and Negotiate. This is something every attentive skipper does continually (and probably without thinking about it) while underway. Simply put, "scanning" is looking from side to side (and also behind you) for boats, people, and objects on the water that may pose a risk of collision. Repeat whenever you are underway. 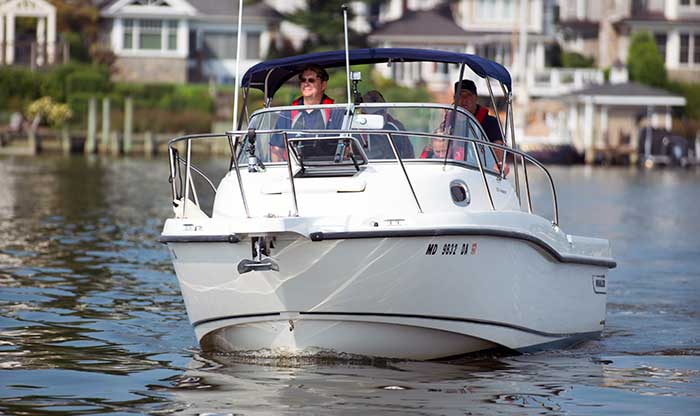 Even if you're not sure that something may be a risk of collision, analyze what is happening in your boat's relationship with another boat or object to assess what action is appropriate or required. The speed of your SCAN-ing will depend on boat traffic and the speed you're traveling. The greater the congestion, the faster you need to SCAN. The faster you're traveling, the quicker you need to SCAN. (See "What is SCAN?" below)

Search the area all around your craft. This is a 360-degree examination of everything on the water around your boat. Distances away will close or open depending on your speed or the speed of the observed boat or object. The faster you're operating, the farther out you'll need to search.

Concentrate on what you're seeing. Is it a boat? What type? What is it doing? What is its relative speed? Is it a stationary object? Drifting or anchored? Things can happen fast out there, so these are questions you must consider while you look at the various observed boats or objects.

Analyze what you're watching. Is it closing in on your position or going away from you? Remember, if the object you're observing is at a constant bearing with decreasing range (meaning you're getting closer to it, and its relative position to you is not changing), it is on a collision course. If it's another boater, do you believe he or she sees you? Never assume you're seen by other boat operators, who may or may not be distracted. Determine this by the way and direction they're operating. Analyze how far away the boat or object is and how fast it is closing the distance between you and it.

Negotiate. What are you going to do? Slow down, turn away from the boat or object, and head in a different direction? Remember the Navigation Rules. Learn the proper action to take while meeting head on, crossing, or overtaking another boat.

Post-Training: Each subject repeated the navigation activity while consciously applying the SCAN methods taught during the training session. My second run provided a common wrinkle: The weather changed. The mostly sunny day had turned overcast, then drizzly with fog. There were no longer many boats out, but with less visibility, I was forced to focus. The training helped me to do that.

"The Navigation Rule of maintaining a proper lookout has been taught, highlighted, and stressed as one of the most important rules since Noah, however that's as detailed as it's ever been," explains Virgil Chambers, former executive director of the National Safe Boating Council, who managed the testing. He then notes the official Nav Rules:

Every vessel shall at all times maintain a proper look-out by sight and hearing as well as by all available means appropriate in the prevailing circumstances and conditions so as to make a full appraisal of the situation and of the risk of collision.

"That's it. No one has ever told the boat operator how to actually maintain a proper lookout. SCAN does just that," Chambers says.

Test results included charts of our brain activity at each stage. The "typical" level was interrupted with spikes upward showing "high focus," and downward spikes indicating "distraction events," which were correlated with notes from the onboard observer indicating what we were encountering at that time on the water. Across the board, irrespective of the level of experience, all four of us significantly improved our attention, as indicated by our brain activity. According to EMOTIV's analysis: 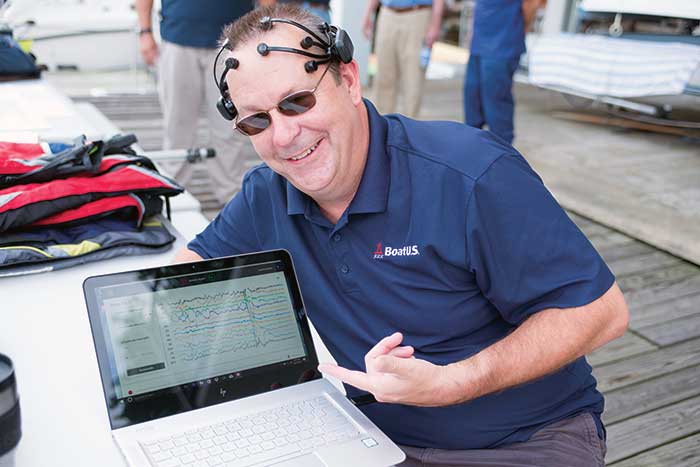 The results of this preliminary assessment suggest that maintaining proper lookout procedures, as specified through SCAN training, is effective in decreasing distraction and increasing vigilance in small-boat operators.

"The goal of SCAN is to reduce boating fatalities and injuries that occur within the boating community," he adds. "This can be done by raising attentiveness through a prevention-awareness, education, and training program that can be easily built into any boating-safety knowledge or skill course or outreach initiative to teach recreational boaters how to deliberately and actively SCAN the area for risks while boating."

For more information, download a copy of the Distracted Boating Experiment US Coast Guard Report on Effects of SCAN Training on Operator Attention.

Going forward, NSBC will further introduce the SCAN technique, which it hopes will reduce avoidable human error through a risk-management/situational-awareness program that will decrease fatalities and injuries. NSBC's plan is to assist boating safety and education organizations in awareness and training of the SCAN program for recreational boating safety professionals to implement in their education, outreach, and training efforts that directly address the need to inform and familiarize both novice and seasoned boaters on the importance of how to actively SCAN while boating.

"By practicing SCAN, boaters of all experience levels can reduce risk and avoid accidents," Chambers says. NSBC is expected to release marketing materials this year that will be available to boaters by visiting Safeboatingcouncil.org, the NSBC website.

According to the U.S. Coast Guard Recreational Boating Statistics for 2015, there were 710 recreational boating deaths and 2,613 injuries resulting from 4,158 reported boating accidents.

The top contributing factors were:

In 2016 there were 701 recreational boating deaths and 2,903 injuries resulting from 4,463 reported boating accidents. Again, as in many previous years, operator inattention was the number-one contributing factor and accounted for 45 fatalities, 373 injuries, and 597 accidents.

"These are human errors that can be reduced by awareness and education campaigns, potentially saving a combined 140 lives, and eliminating 1,384 injuries and 2,033 accidents during that two year period," says Chambers.