To Be Young and Free: Sailing the Great Loop and Beyond

Two best friends sail south from the Midwest to the Bahamas, discover what they're capable of, and encounter a boating community they'll never forget. 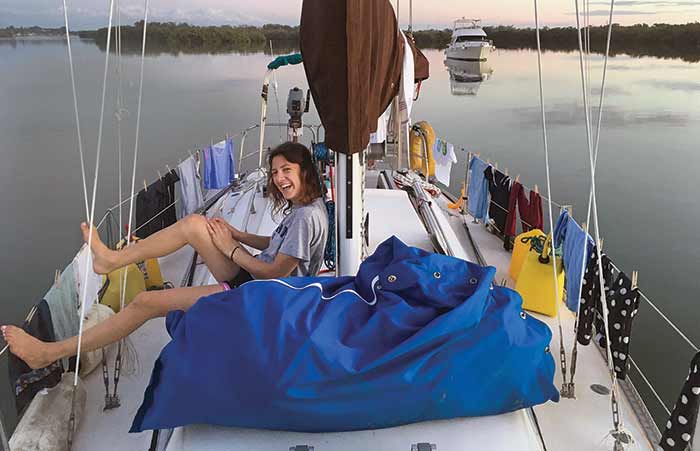 This may sound funny, but I'd never even heard of the Great Loop until my best friend, Emily Gazall, sent me the link to a blog by two young women who chronicled their 6,000-mile journey through inland waterways of the eastern United States. Emily and I were college seniors at the time, studying like crazy, headed for graduation and grad school. But we became distracted reading the inspiring entries on katieandjessieonaboat.com, as they navigated a Cal 27 sailboat on a two-year adventure.

Emily and I loved Katie and Jessie's adventure and began to joke about doing it ourselves. The seed was planted. We graduated, decided to go for it, and worked for a year to save money. My family had a 1983 Columbia 8.7, a 28-foot coastal cruiser that could be great for such a trip. We convinced my parents that this was a good idea, and in return for borrowing their boat, we offered to help fix her up. The plan was set.

I'm 24 and grew up in metro Detroit, spending winters landlocked and summers on the water sailing at Crescent Sail Yacht Club, coaching for the junior sailing program while earning a bachelor's degree in biology from Oakland University in Rochester, Michigan. Emily, 23, also grew up junior sailing at Crescent Sail Yacht Club, where we met and became friends. She continued sailing at the University of Michigan and earned a bachelor's degree in English while making 14-hour road trips in university vans to regattas. We've done a lot of racing, including several long-distance Port Huron-to-Mackinac Boat Races in all sorts of tough weather conditions. We were committed and passionate sailors, but this was a totally new challenge for us. 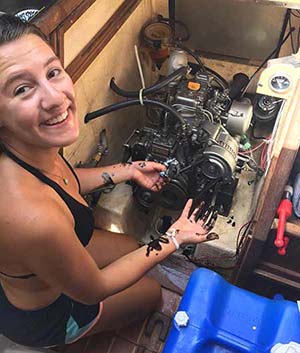 When changing the oil filter, Emily discovered the
cleanest way is to put a cup under the filter.

At first, making the decision to abandon our normal lives was the hardest part of the journey. But the enormous amount of work we put into preparation and boat renovations would rival that difficulty. With Emily working in Chicago, I threw myself into a crash course on everything boat. My limited proficiency with tools and fixing things transformed into a more extensive knowledge base on plumbing, electrical skills, engine maintenance, and an uncanny ability to extract solutions from Google. With the help of my dad, fellow yacht club member Rich Marsh — our boat Yoda! — and countless other people who were generous with their time and advice, we made the boat our mobile home.

We could have waited to finish everything on the ever-lengthening punch list, but we were behind schedule. Every cruiser knows there's a point when you have to just call it done and go. The night before we left, in a ceremony involving rum and a machete, we rechristened the boat Elpis, the spirit of hope in Greek mythology. We threw everything on the cabin sole and cast off from Detroit at 7 a.m. on Monday, Sept. 11, 2017.

In a race to beat what can be nasty Great Lakes fall weather, in three weeks we made it 550 miles to Chicago, stopping every night. The excitement of our departure was soon accompanied, ironically, by the stress of learning everything the hard way. Sure, we'd grown up around boats, but some things you can't learn on a racecourse, like how to live aboard a boat long-term. We were getting a real-world crash course on fuel consumption, engine maintenance, how to anchor safely for the night, how to communicate with bridge tenders, and the wisdom of how not to light the boat on fire with a two-burner alcohol stove.

The beginning was a blur, and by the time we docked in Chicago in 25-knot winds after our first overnight crossing, it felt like we'd finished a marathon barefoot. Upon entering the inland river system in Chicago, we came face to face with fresh challenges.

Apparently, many people study articles and videos on how to go through a lock ahead of time. We had spent so much time doing boat repairs that watching YouTube videos fell low on the priority list. It took practice to learn the proper way to use a floating bollard, but we finally got the hang of it and were less intimidated by our second lock encounter — dropping 40 feet down in the dark, in the rain. 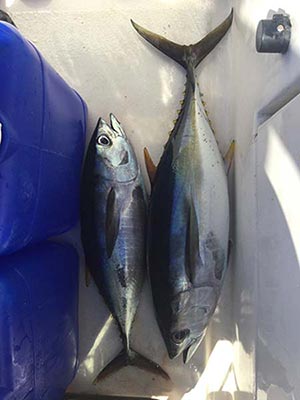 With so much fish and no refrigeration, the women
grew accustomed to sharing their catch with friends.

The camaraderie among "Loopers" quickly became apparent and, with the help of new friends, our cruising guides progressed from rudimentary, handwritten notes to actual published guidebooks. Six weeks into the journey, on a chilly October day on the Mississippi River at Hoppies Marina in the small town of Kimmswick, Missouri, our freshwater pump decided to give out. It had been vibrating at a strange frequency, and we were pretty sure the set-screw was loose but were nervous about trying to fix it on our own.

Two trawlers we'd shared "docktails" with a few days prior were still nearby. When we told them about our pump, there was no hesitation. Dan of Syzygy and Jerry of Monarch brought over a bag of tools and an assortment of screws, began diagnosing the problem, then taught us how to fix the pump. That these folks were happy to drop everything and help fellow boaters was the first of what would be many examples of the kindness in the boating community.

Our new friends became dear travel companions on the Tennessee-Tombigbee Waterway and through Florida. They often invited us over to share a warm meal or take a hot shower, and Syzygy even cooked us all Thanksgiving dinner in a remote anchorage in Alabama.

Of Miles And Milestones 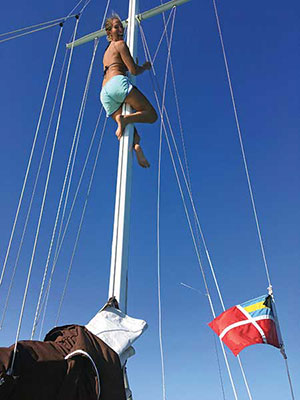 One of the pendant halyards snapped, so Grace
free-climbed up the spreaders to replace it.

It took awhile, but we found our rhythm and settled into life afloat. Emily and I grew accustomed to constantly sharing a small space, figured out how to communicate with barges, and agreed that anchoring was way more fun than docking. Heading south, curiosity to explore towns and fall colors was no match for our desire to be warm. There were more than a few misty mornings I had to hang on tight to retrieve the anchor because the deck was coated in frost. The unusually cold autumn stretched south to the Gulf of Mexico. It was snowing when we reached Mobile, Alabama. Our quest for warm weather led us around the Gulf side of Florida, and three overnight crossings later we were in the Florida Keys.

By this point, we'd come a long way, geographically and personally. We could anchor anywhere, were queens of canned food and tight budgets, and comfortably knew how to handle tides, heavy weather, and navigating. It was time to move to the next level: The Bahamas! True, the islands are not officially waypoints on the Great Loop, but we were drawn by the magical-sounding stories from Katie and Jessie's blog posts and guidebook pictures that looked like heaven. So close and really not so far, we were ready for adventure! 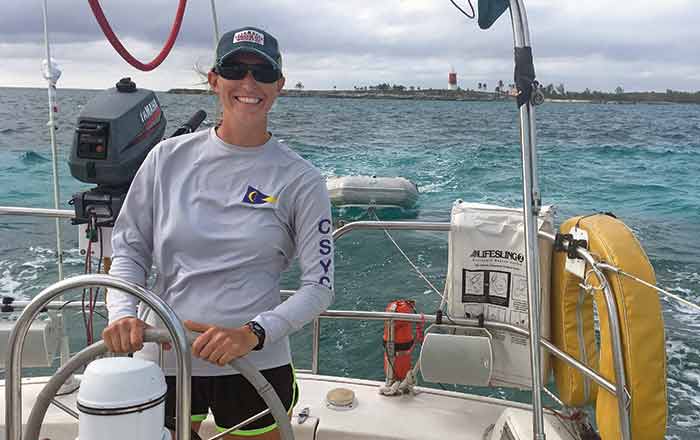 Grace (pictured) and Emily had just entered Gun Cay Cut after crossing from Marathon where they first experienced the islands and blue water.

Traveling the Intracoastal Waterway (ICW), we were used to all-day motoring, protected anchorages and passages, and powerboats of every kind everywhere. There was no problem getting to a grocery store, a fuel dock, or a hose with good drinking water. As soon as we sailed across the Gulf Stream to the islands, it was a different world.

After about two weeks of island hopping south along the Bahamas archipelago, we found ourselves in George Town in the southern Exumas. Here was a community unlike any we'd seen — 250 boats anchored out as a floating city, dinghies used as cars, and everyone communicating and traveling with VHF radios. 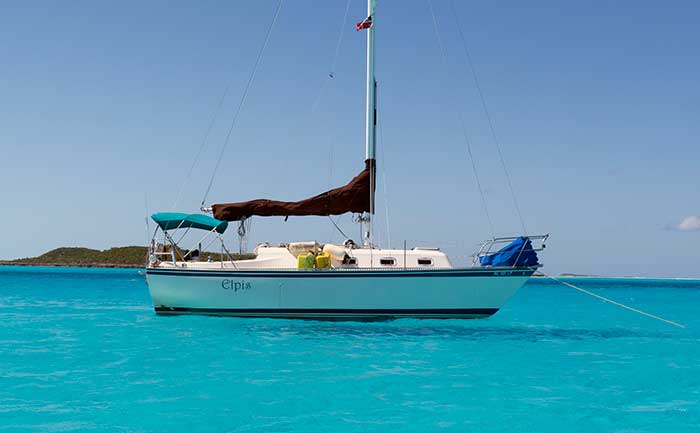 Elpis swings on the hook in the turquoise water of the Bahamas.

George Town is more a way of life than a location. Every morning at 8 a.m., Bill on Charisma broadcast a Cruisers Net on Channel 68, where new arrivals were welcomed, departures announced, and local events advertised. The only time anyone had a reason to remember the day of the week was on poker nights, which were Tuesdays and Thursdays. VHF radios were the primary method of communication. Cruisers gathered every afternoon on nearby beaches, always ready to give cruising advice, take someone across the harbor for a grocery run, assist with a boat project, or just share a drink. 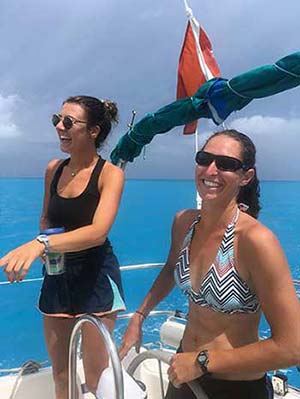 In George Town we also found kindred spirits — young people! We met so many inspiring individuals under the age of 35, like-minded souls choosing, for a time, to make their homes on boats that rock in the wind, rather than in apartments and working office jobs. We met couples who decided to give cruising a try, young captains working charters, even solo sailors out to see the world. These people became our ocean family, and it was so cool to see them out there turning their dreams into reality. Our George Town friends reminded us every day that the world opens its arms to those who seek it out.

We felt especially inspired when we met other young women boaters. Two stood out. Madde is a 28-year-old charter captain on a boat named Migration. She chose adventure over a traditional career, got her captain's license, and now knows more about sailing and engine mechanics than anyone we know. Not only is she a good friend; she is generous in sharing her knowledge, starting by helping Emily through a fuel-filter change.

Holly, 32, taught herself to sail in her 20s, fixed up her boat Another Adventure, and was exploring the Bahamas before eventually heading toward Australia. These women gave us more confidence in ourselves and continue to inspire us.

The sunny days, clear blue water, and white sand beaches made every day incredible. We swam and snorkeled in clear turquoise waters, hiked into the islands, hung out with our new friends, and all helped each other. Five weeks later, we'd added an extra 20 feet of chain for our anchor, a gaff for fishing, a new dinghy, and unexpected lifelong friends. It was heartbreaking when it was time to pull up anchor, turn north again, and leave all these kind and generous people. We were a long way from home, but hurricane season and grad school loomed. 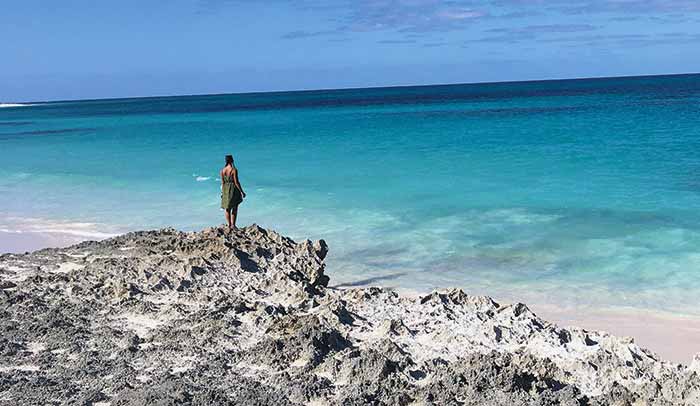 Grace looks out on the ocean from Hopetown in the Abacos.

Our trip north consisted of easy travel days sailing up the Exumas and through the Abacos, swimming every chance we got. We learned more about the ocean every day: snorkeling; spearfishing; and catching, cleaning, and cooking fish. When we sailed back across the Gulf Stream to the States and begin hurtling home toward our responsibilities, we knew we'd just written a chapter of our lives that, one short year before, we couldn't have imagined would be so momentous.

When Elpis arrived at Lake Ontario, Emily drove back to Michigan to spend time with family and pack for graduate school. Grace's family helped with crew rotations until she was ready to solo sail down Lake Huron, returning to Detroit on Oct. 3. "We came back with a great hunger to see what else is out there in the world and what we have to do to chase it," Grace says. "Anyone can do what we did, as long as they have a dream and enough desire to make it happen. The hardest part is deciding to go. After that everything falls into place." emandgracegosailing.wixsite.com/greatloop