A closer look at how waves form and what affects them will help you make smarter boating decisions. 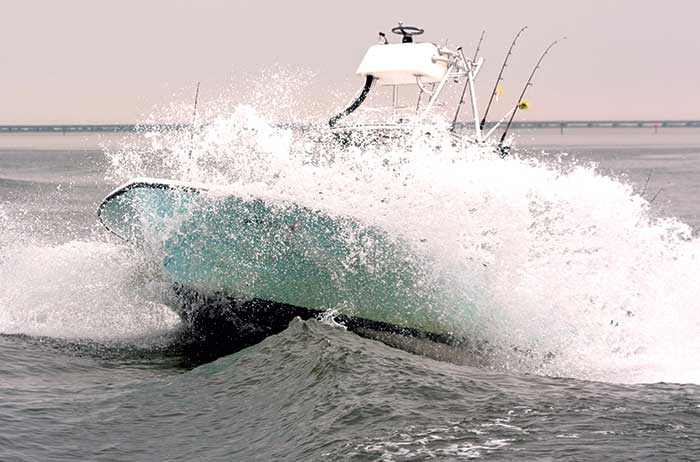 It's helpful to understand the science behind wave formation, but it's even more important to know how your boat handles in waves coming from different directions. (Photo: Getty Images/SGoodwin4813)

Waves develop as a result of wind blowing for a certain amount of time (duration) over a certain distance (fetch). The stronger the wind and the longer the fetch, the higher the waves become over time. Ocean waves that move beyond the place from which they were generated become deep-water swells, underlying the local, wind-generated surface waves.

Ocean swells can travel great distances and inevitably encounter other swells of different lengths and heights, which were generated in other areas and are traveling in different directions. A typical sea state is made up of a mixture of deep-water swells and waves, which all combine to form the apparent chaotic ocean surface known as the wave spectrum.

Periodically, wave peaks will coincide, producing especially large waves; at other times they will virtually cancel each other out and form relatively small waves. So there is no single "wave height" that will describe all waves at a given place and time.

Wind waves are independent of the swell and add to the wave height. The result is called "combined seas (CS)." The National Weather Service considers CS equal to SWH. Waves are defined by four components: height (trough to crest), length (distance between crests), period (time elapsed from the passage of one crest to the next), and steepness. Steepness is the ratio between height and length. When wave steepness exceeds 1:7, the wave will begin to break — resulting in whitecaps. This generally happens in 12 to 15 knots of wind.

There are a number of things that will change the shape, height, and direction of deep-water swell.

Reflection happens when waves bounce back from an obstruction and combine with still-approaching waves. Reflected waves have been seen as far as 15 miles off the California coast where the shore falls steeply into the ocean.

Refraction is a change in direction as a wave encounters shallower water near the shore. The shallower water slows the wave, causing a bending (or refraction) that favors parallel wave fronts to approach the shoreline. Near a headland, refraction focuses wave energy at the tip of the point. Near islands, waves often wrap all the way around the island. And when waves rejoin in the lee of the island, they can augment each other to form larger, sometimes breaking waves.

When current opposes the wind, waves can build quickly to steep and dangerous proportions. Common examples include the Gulf Stream, the Agulhas current, and places where prevailing winds oppose tidal currents (San Francisco Bay, or the Bay of Fundy during a strong ebb).

Unusual or "rogue" waves are the combination of smaller wave peaks into larger-than-normal waves. They often appear from a different direction than the main wave pattern as sudden breaking seas. They can cause unexpected damage in an otherwise manageable sea state. Seamounts such as the Cortes Bank, which is 100 miles off the coast of San Diego, can create 14-foot (and occasionally much larger) breakers in the middle of an otherwise calm sea.

When a deep-water wave reaches shallower water, its characteristics will change. The apparent "movement" of a deep-water wave is actually a moving pulse of pressure; individual water particles rotate within the wave crest as the pulse passes. Once a wave "feels the bottom," it slows down. The period remains unchanged, however, so the wave becomes slower, shorter, and taller. As water depth decreases, wave height increases, until the wave becomes unstable and breaks. The water particles in a breaking wave no longer rotate within the wave crest; instead they rush down its face.

If the breaker forms gradually (a slower-moving wave hits a gently sloping beach), the waves will form "spilling" breakers with the water tumbling down the sloping face of the wave. If the breaker forms quickly (a faster-moving wave hits a more steeply sloping shoreline), then a "plunging" breaker forms; the face becomes vertical, curls, and then collapses into the trough. This is the classic surfing wave. The plunging breaker generally contains more energy and is therefore more dangerous.

Breaking waves of any height are much more dangerous than even significantly larger ocean swells. The surface force of a breaking wave has the tendency to turn a boat broadside – the "log effect." A breaking wave equal in height to the beam of the boat is likely to capsize a boat.

Depths At Which Breakers Will Form

The critical question for boaters is at what depth breakers will form, particularly when approaching a lee shore. A series of calculations well beyond the scope of this article will answer that question exactly by calculating three important factors: the wave's size and steepness, the depth of the water, and the shape of the bottom contour.

Fortunately, for the boater approaching a lee shore, there are several rules of thumb to help you calculate safe water depth for a given weather forecast. One of the most reliable is professional offshore navigator Stan Honey's rule (see "Practical Takeaways" below). So for a forecasted 15-foot swell and 7-foot wind-wave, the minimum safe water depth would be 55 feet (add 15 and 7 to get 22, then multiply by 2.5).

There are many factors affecting wave formation and a wide variety of possible wave heights and characteristics for any given sea state. Know how your boat will handle waves from the bow, the quarter, and abeam, and be prepared to orient your vessel to best advantage for any given sea-state.

Whenever possible, avoid shallow water and lee shores, and remember:

Excerpted from US Sailing's Safety at Sea: A Guide to Safety Under Sail and Personal Survival. ussailing.org

Safety At Sea is a 220-page book that was written to accompany US Sailing’s Safety at Sea course, which shares best practices with both aspiring and experienced offshore sailors. It can be purchased at https://shop.ussailing.org