When it comes to personal flotation devices, one size doesn't fit all. And forget the old U.S. Coast Guard 'types.' Here's what you need to know. 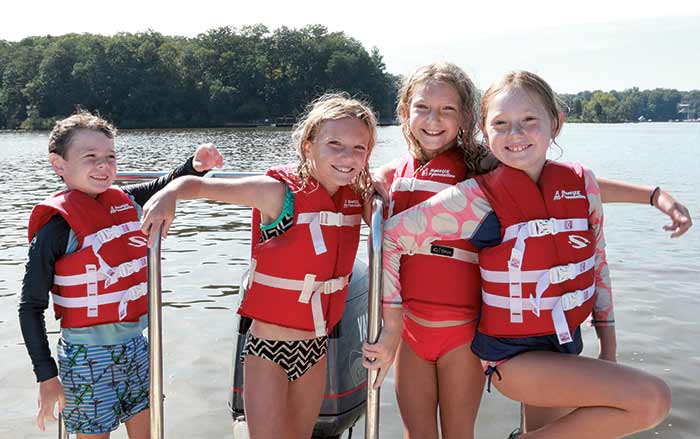 It's a well-established fact that wearing a life jacket can save your life. But there are several different types, and no one life jacket works for every activity.

In the 1980s, the U.S. Coast Guard created four wearable life jacket "types" and one throwable flotation "type" for recreational boaters. There is a ton of information about the range of Coast Guard-approved life jackets, but much of this is now out of date. In fall 2014, the Coast Guard announced that, beginning in 2016, life jackets would no longer be categorized by "type." Newly introduced life jackets are to be classified by "level," which corresponds approximately to the buoyancy in a measurement unit called Newtons [the force required to cause a mass of one kilogram to accelerate at a rate of one meter/second squared, in the absence of other force-producing effects] provided by the device. These levels closely follow the ISO standard known as ISO 12402; the new North American standard is known as UL 12402. The four consumer-oriented life jacket levels are 50, 70, 100, and 150.

This change has caused a lot of confusion. But the Coast Guard's goal was to begin the process of "harmonization" between life jackets made to the ISO standard (used in Europe and the rest of the world) and those made to U.S. standards. Ideally, life jackets built to one set of standards with one type of label to describe the life jacket's attributes could be sold in multiple markets around the world. In theory, this will enable development of products that are more comfortable and have innovative designs and features. Consistent global labeling will also make it easier for consumers worldwide to determine the correct application and size of each life jacket.

While the U.S. transitions from one life jacket standard to another, selecting the right one could be confusing. If you're unsure whether a life jacket is legal for use on a particular boat, read the label on the life jacket. It should say something like "Legal for all recreational boats."

Which Life Jacket Is Right for Me?

What's A Life Jacket Supposed To Do?

A life jacket prevents you from drowning long enough that you can be plucked from the sea. Although in some rare cases you may be able to self-rescue (by swimming to another boat, the life raft, or the proverbial desert island), you're much more likely to be rescued by someone else. There are several ways an offshore life jacket increases your chances of survival.

Hypothermia reduction: An offshore life jacket will help you avoid hypothermia by allowing you to assume the HELP, or Heat Escape Lessening Posture, which can roughly double your cold-water survival time. By clamping your arms to the sides of your chest, clutching the life jacket to reduce water flow, and pulling your legs in toward your chest, you effectively protect high heat-loss areas (head, neck, armpits, and groin). If you try this in a lower buoyancy life jacket, you'll roll forward, and your face will go in the water.

Maintain upright attitude: Having to use your arms and legs to keep your head above the surface wastes both energy and body warmth. A high buoyancy life jacket should hold you in a semi-reclined position, with sufficient freeboard (mouth height above water) to make breathing relatively easy regardless of sea state.

Heave period: How long will it take you to pop back to the surface after being forced under by a wave? In a low-buoyancy life jacket, there will be long periods of time when your head is immersed, increasing the risk of drowning. High-buoyancy life jackets reduce the heave period so that the swimmer stays on the surface, with adequate freeboard to enable breathing, for a greater percentage of the time. Note: Heave period is related to other life jacket variables besides buoyancy, but there isn't an easy way to quantify it. When selecting a life jacket, the most relevant variable is buoyancy, which is measured in pound force (lbf) or Newtons.

Survival after losing consciousness: Remarkably, it's possible to regain consciousness after being so severely hypothermic that you've slipped into unconsciousness, as long as your airway has not been compromised. Remember that scene in the movie "Titanic," where all of the people wearing life jackets appeared to be dead? With the correct rewarming techniques, those passengers could have been saved if they had been removed from the water and given medical treatment. 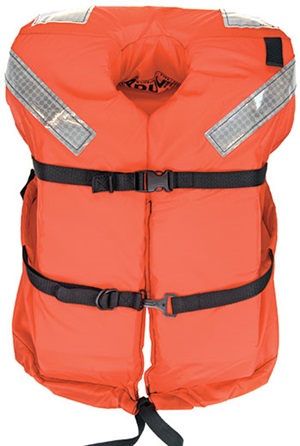 As of this writing, the UL 12402 standard for life jackets has not yet been finalized. In order to compare the old and new rules for near-shore and offshore applications, we've made educated predictions about what the new standards will say.

Offshore life jacket: Formerly known as "Type I" life jackets, these generally use foam for flotation, provide at least 22 lbf (around 100N) buoyancy, and are most commonly used on commercial vessels. Despite adequate in-water performance, they're not very useful for recreational vessels because their bulky shape restricts mobility. There is a common thought that offshore life jackets are what you want on a larger cruising boat "in case you sink," but they will not help save you from more common dangers (falling overboard or being ejected from the boat) if they're not worn. 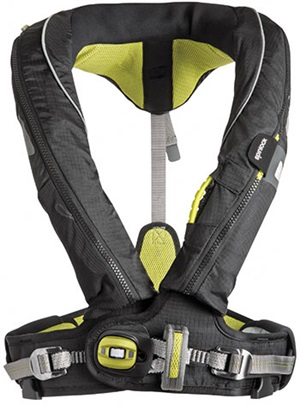 Some inflatable life jackets are equipped with
harnesses, making them suitable for offshore use.

Near-shore buoyant vest: Formerly known as "Type II" life jackets, these have a minimum buoyancy of 15.5 lbf (around 70N) and the classic "horse collar" shape. The least expensive life jackets, these are intended to meet the letter of the law; they have few other redeeming qualities. For any boating activity, there is a life jacket that will work better than a Type II.

Some non-harness inflatables with water-activated inflation are also considered Type II life jackets, and they can have up to 33.7 lbf (150N) of buoyancy.

Flotation aids: Formerly known as "Type III" life jackets, these also have a minimum of 15.5 lbf (69N) of buoyancy. They're available in a wide variety of styles and should be selected with the end use in mind. Specialized models have been designed for paddling, sailing, tow sports (like wakeboarding and water skiing), fishing, and so on. The sailboat/powerboat versions are comfortable to wear and provide some degree of hypothermia protection as well as moderate buoyancy. Although they may be appropriate for near-shore, they don't offer enough flotation to be suitable for offshore use. 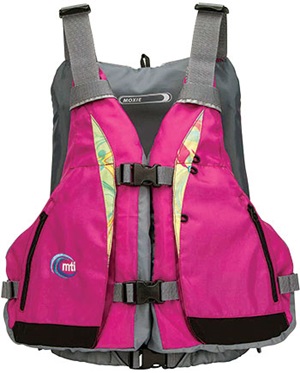 Some non-harness manually activated inflatables are also considered Type IIIs. These can have up to 33.7 lbf (150N) of buoyancy. Again, the offshore boater should consider a model with an integral harness.

Special use device: Formerly known as "Type V" life jackets, this category includes everything that doesn't fit into the other three. A few special-use devices are useful to either inshore or offshore boaters. The first is the "dinghy"-style vest, which is designed for sailing a small dinghy or keelboat. Many are hard to adjust or have some other features that eliminate them from being categorized as a Type III Flotation Aid. Special use devices also include any inflatable life jacket with a built-in safety harness, because using the harness demands additional training and/or instruction. And certain types of inflators may move their life jackets into this category, even if they are otherwise identical to similar inflatables.

The bottom line is that a life jacket categorized as a "special use device" should not be considered somehow less desirable; it may have exactly the features that you need.

Many special-use devices must be worn to be counted in the vessel's inventory. If you're boarded by the Coast Guard and you don't have that type of life jacket on or some other approved life jacket aboard, you could be subject to fines. To be both legal and safe, wear your life jacket.

The Future: "Level" System Of Classification

New North American life jacket standards are currently being introduced into the U.S. and Canada that will change many aspects of life jackets, including labels and designations. Future life jackets will be referred to as Level 50, Level 70, Level 100, Level 150 and Level 275, corresponding approximately to the buoyancy, in Newtons, provided by the device. This is similar to the ISO standard that uses the same performance levels.

Level 50: Intended for active watersports like water skiing and wakeboarding, these minimize bulk and restriction. They may also be used by dinghy sailors. Regulatory changes will have to be made in the U.S. and Canada for these to be legal, so their introduction appears to be many years off. They provide around 11.2 lbf of buoyancy.

Level 70: Very similar to what we now think of as Type III. Inherently buoyant, close-fitting, and available in a variety of designs tailored to different types of boating. In the future, there may be inflatable versions of Level 70 devices, but this would require a change in federal regulations.

Level 100: These vests will have greater buoyancy for rougher waters. They may be either inherently buoyant or inflatable. Around 22.4 lbf of buoyancy.

Level 150: These vests will be similar to our current offshore inflatable life jackets and may have integral harnesses. Intended for rough waters where rescue may not be immediate. Will also have inherently buoyant versions. Around 33.7 lbf of buoyancy.

Level 275: These inflatable life jackets will be for extreme conditions, especially when the wearer might be carrying gear that adversely affects his/her buoyancy (like tools). They are generally intended for commercial users.

Inherently buoyant life jackets: These have evolved from a variety of lighter-than-water substances like cork and sealed bags of kapok to a variety of soft synthetic foam rubbers. As with any material that displaces water, more buoyancy requires more bulk. Achieving 35 lbf (150N) of buoyancy requires a very large life jacket, and placing that buoyancy so it will maintain your airway by keeping your mouth above water will further restrict mobility. Inflatable life jackets: In the last 25 years, inflatable life jackets have become very popular for a number of reasons:

There are many different types of inflatables, and some are better than others for near-shore and offshore use. Here's a list of variables:

In the U.S., inflatables that are worn around the waist ("belt packs") are available in 24 lbf and 35 lbf models. They must be pulled over the head after inflation, which may be challenging for weak swimmers or anyone who enters the water unexpectedly. But they're more comfortable, especially in hot climates, which increases the likelihood that you'll be wearing it when you need it.

"Over-the-shoulder" inflatables are in the correct location on your body as soon as you put them on. This makes them slightly less comfortable but also safer, as they'll float you as soon as they inflate. Offshore boaters should wear a vest-type inflatable.

Be sure to test your life jacket in the water, before you need it, to assess its fit and functionality. There have been reported cases of inflatables shifting over the wearer's head and causing problems due to asymmetrical buoyancy.

Reprinted from Safety at Sea: A Guide to Safety Under Sail and Personal Survival, by C. Hawley, 2017, US Sailing.

Chuck Hawley is the chairman of the US Sailing Safety at Sea Committee. A lifelong sailor, he has made two singlehanded passages to Hawaii, three crewed trans-Pacific races, and a World Record attempt on the west-to-east trans-Atlantic record. He is a nationally known speaker on marine safety and one of five moderators of the US Sailing Safety at Sea Seminars. He’s also a Powerboat Instructor for US Sailing. Chuck has worked for West Marine for nearly three decades and is responsible for the product content on westmarine.com. He lives in Santa Cruz, Calif., with his wife, Susan, and five daughters.