There can be many types of hoses used on boats and they all have specific jobs. Here's how to tell them apart and which ones to use where. 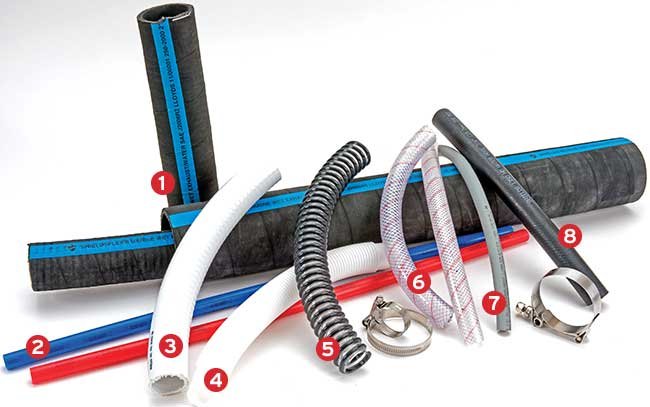 There are many different types of hoses aboard boats, and each one is designed for a specific function.

There is no such thing as an all-purpose hose on a boat. No single hose type can withstand engine exhaust, bring freshwater to the galley, safely transport gasoline to the carburetor, drain the cockpit, and flush the head. Using the wrong hose can cause problems that range from an inconvenient mess to a burning boat. This handy run-down will help you identify one type of hose from another and assist in choosing the right hose for the job at hand. We'll start with a visual guide to common marine hoses, then go into more detail about each type.

1. Exhaust hose. Able to withstand temperatures to around 250 F, an exhaust hose is often reinforced with wire, which may be stainless, or other special reinforcement. Other, more expensive silicone hoses are capable of sustaining much higher temperatures.

2. Hot and cold PEX potable water pipe. Many modern boats use PEX tubing for hot and cold plumbing. PEX is available in three distinct grades: A, B, and C. Although all are perfectly acceptable for potable water, Grade A is the most flexible and easiest to run in the tight confines of a boat. Fittings are easy to connect to the pipe, although you may need special tools. PEX is not the only option for potable water, however (see 6).

3. Sanitation hose. Often white, with a smooth bore to prevent trapping waste that could lead to odors, sanitation hose has an expected lifespan of approximately 10 years.

7. Fuel hose. Fuel hose must be marked as such and will be stamped A1, A2, B1, or B2. Older hoses are incompatible with fuel containing ethanol, so if yours is older than about 10 years, it's most likely due for replacement anyway.

8. Thru-hull hose. For any connections to thru-hulls, reinforced hose is the only way to go. A cheap hose may fail and sink your boat.

Gasoline-powered boats have specific requirements for hoses that are so demanding they're covered under federal law. Gasoline hoses are usually made from rubber compounds. Hoses that carry gasoline must be U.S. Coast Guard-approved and are marked with J 1527 A1, A2, B1, and B2, as well as with the manufacturing date. Fuel hose is often black with a red stripe or red lettering on it.

A-type hose is thicker than B-type and has to pass a 2.5-minute burn test (designed to give you enough time to get off the boat in the event of a fire). Type 1 hose is far less permeable than type 2. In the end, it makes sense to just use the best — A1 — for all gasoline uses. A1-15 hose is even less permeable and will become more and more common due to EPA regulations and in some cases is already required. Gasoline hose has a useful life of about 10 years. American Boat & Yacht Council (ABYC) guidelines require that gasoline fuel fill hoses be double-clamped.

While there are no federal regulations for diesel-powered boats due to the reduced explosion risk with diesel, A1 hose is also the best to use. The extra thickness guards against chafe, and because it's less permeable, it's less likely to transmit diesel odor to the boat interior. 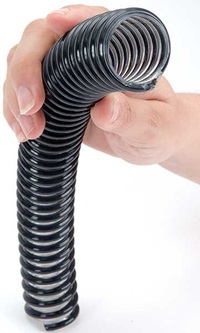 Bilge pump hose needs to be extremely flexible, be strong enough to resist attack from chemicals, and have smooth internal surfaces to allow water to flow freely. Corrugated hose, seen in many installations, saps as much as 30 percent of the bilge pump's capacity because it creates extra friction. Bilge hoses are usually made from vinyl to maximize flexibility.

Tip: Bilge pumps won't work well (or at all) if the hose has rises or loops where water can get trapped because the pump may not be able to overcome the resistance.

Hoses that carry drinking water have to be made of FDA-approved nontoxic materials (stamped on the hose) so that chemicals from the hose don't leach into the water. Chemicals can also make water taste bad. PVC hose is usually used for this purpose, and systems that have pumps to deliver water under pressure or have hot water should use a reinforced type.

While many potable water hoses are clear, opaque hose has the advantage of preventing slime from forming. There are essentially two types of vinyl hose, reinforced and non-reinforced. You can tell them apart because reinforced has synthetic fabric strands visible while the non-reinforced does not. Reinforced is always the better bet as it resists kinking, is stronger, and is less likely to collapse especially when used on the suction side of a pump.

PEX is often a good choice on larger boats with long pipe runs where its semi-rigid structure and resistance to sagging makes for a neater installation with fewer supporting clips or brackets needed. PEX, short for polyethylene, comes in various colors, often blue for cold and red for hot, although grey is common too. All PEX piping has similar properties irrespective of the color.

Tip: Even clear hose that is hidden behind lockers will eventually get growth inside. It can be killed by flushing a bleach solution (3/4 cup per 10 gallons) through the pipework but be sure to flush the system with plenty of clean water before drinking. 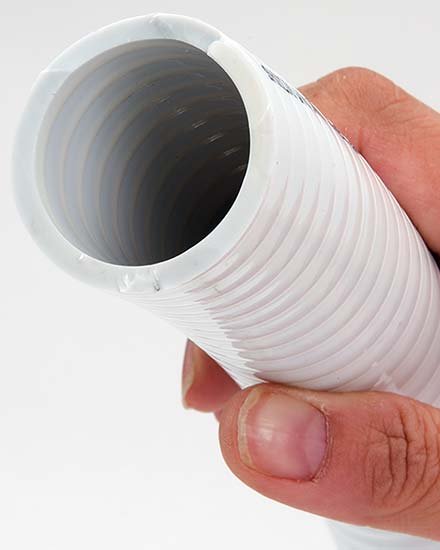 The best sanitation hoses are thick-walled and smooth inside. Reinforced PVC is an excellent choice. Hoses for sanitation use are clearly marked, most often with the words "sanitation hose" printed in a stripe running the length of the hose. Although it's tempting to use other types of hose that may be more flexible, don't. Smells and other problems are sure to follow. Aside from being strong, holding tank (sanitation) hose must have the least permeability possible.

Hoses should be run, as far as practicable, so that there is no standing water in sags or loops to prevent premature aging and permeation. This kind of hose eventually can get clogged over time with scale by waste and uric acid from the head. Using incorrect hoses have caused all sorts of problems — really foul smells caused by using the wrong type of hose has rendered many a boat unusable.

Tip: Most holding tank odors come from the hose. To check, run a clean cloth over the hose and take a sniff. If it smells icky, the hose is permeating and needs to be replaced. 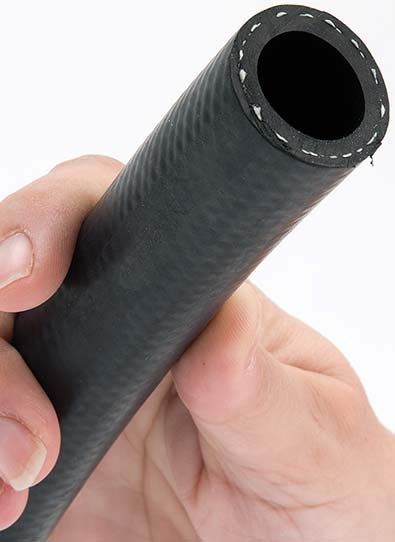 Thru-hull hoses are really just an extension of a hole in your boat, connected to an above- or below-waterline fitting. As such, they must be exceptionally strong and long-lasting. Hoses that are used at water intakes need to be rigid enough to withstand suction from engine raw-water pumps. Thru-hull hoses are typically made from rubber that has been reinforced with metal or plastic spirals and may be double or even triple walled. Hoses that connect to underwater fittings should be manufactured to SAE J20R3 as a minimum and marked as such on the outer surface.

Don't assume that automotive radiator hose is strong enough just because some of it is reinforced. It's thinner, and the metal reinforcement may rust from seawater and further weaken the hose.

Thru-hull hose is stiff, and it's essential you don't bend them too far or you'll create a weak spot and/or a restrictive and possibly damaging crimp. The lifespan of these hoses varies, but hoses that are more than 10 years old should be considered suspect. And although ABYC doesn't require it, this is one type of hose that deserves to be double-clamped, if there is room on the fitting.

Tip: If you aren't sure the thru-hull hose on your boat is rated for marine use, compress it between your thumb and fingers. Radiator hose is fairly easy to compress, whereas reinforced thru-hull cannot be squeezed nearly so easily.

The exhaust hose is one of the most critical hoses on board. A leaking hose will not only flood the boat with cooling water, but it will also release deadly carbon monoxide. (This is why ABYC standards call for double-clamping of all exhaust hose connections.) Most exhaust hose is made from rubber and designed to withstand temperatures to 250 F. Some special silicone rubber exhaust hose can withstand up to 500 F and is often blue, making it easy to spot. If your engine's cooling water system fails, the exhaust hose is usually first to suffer because it takes the full brunt of hot exhaust gases. The higher its temperature rating, the longer it will hold together.

If you experience severe engine overheating, your hoses may look fine but are likely to be damaged on the inside and should be replaced immediately. Even if the engine has never overheated, regularly check for bulges, cracks, and soft spots. Long runs of exhaust hose need to be well supported, since they may be full of water and heavy.

Leaks in a liquefied petroleum gas (LPG) system (also called propane) can be catastrophic, which is why propane hoses must have permanent connections and cannot be hose clamped to a barb like most other hoses, so it's not possible to make up your own hoses. This is one job that should always be left to a professional. LPG hose is thermoplastic and sold in specific lengths with fittings already attached. Chafe is the enemy of this type of hose, so it must be protected by a grommet wherever it passes through a bulkhead. LPG hose will be marked "UL 21," which denotes that it's suitable for propane. 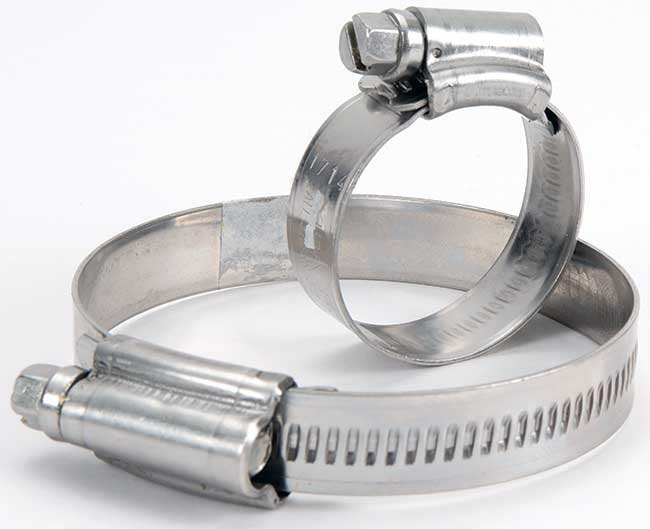 Good quality hose clamps last much longer than cheap ones. Look for clamps that are 100 percent stainless steel, including the screw. The best ones are nonperforated rather than slotted. Clamps that are embossed rather than perforated are much stronger and longer lasting. It's tempting to think that stainless steel does not rust, but it does, especially when in contact with deoxygenated water, such as that found trapped between a clamp and the hose it is holding.

Use the best marine-grade 316 stainless steel hose clamps. Replace any that are even slightly rusted, and double-clamp critical hoses. Band-type clamps are the best choice for exhaust hoses as they are wider and are tightened with a bolt rather than a screw.

Tip: You can perform a quick check of hose clamps with a magnet. Quality hose clamps will be nonmagnetic. Cheaper hose clamps may have a regular mild steel screw and should be rejected, even if the remainder of the clamp is made from stainless.